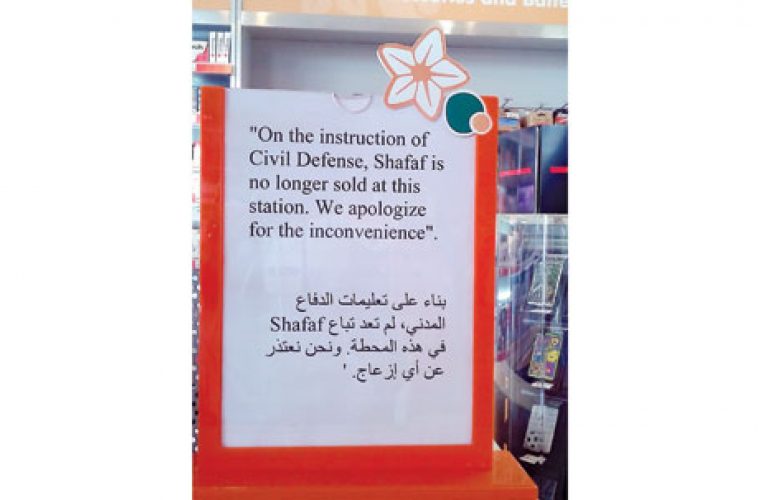 Woqod has stopped selling its lightweight Shafaf LPG cylinders at its fuel stations.

The move follows instructions from the Civil Defence directorate in the wake of the explosion at a restaurant in a petrol station near Landmark mall last month.

Notices have been put up at some Woqod fuel stations announcing the decision.

“On the instruction of Civil Defence, Shafaf is no longer sold at this station. We apologise for the inconvenience,” read the announcement at a fuel station in Doha.

Woqod had earlier stopped refilling LPG cylinders and tanks at eateries in fuel stations. All eateries at fuel stations have been asked by the Civil Defence authorities to replace LPG tanks and cylinders with electric stoves.

Meanwhile, some supermarkets said yesterday they had also stopped selling Shafaf cylinders, after a number of cylinders were stolen from their premises last week.

An Indian expatriate running a supermarket in the Industrial Area said 19 cylinders that were for sale were stolen in a single day. He said some other supermarkets in the neighbouring areas had also reported similar incidents the same day.

The cylinders were kept in metal racks outside the shops. They were stolen after chains and locks securing them were broken. The manager of a supermarket in Najma area said nine Shafaf cylinders were stolen from his shop about six days ago in the same manner. Some of the affected said they had lodged complaints with the police.

“We have stopped selling the cylinders because we have no place to keep them safely,” he said.