Vodafone launches THE third EDITION OF ITS literary competition 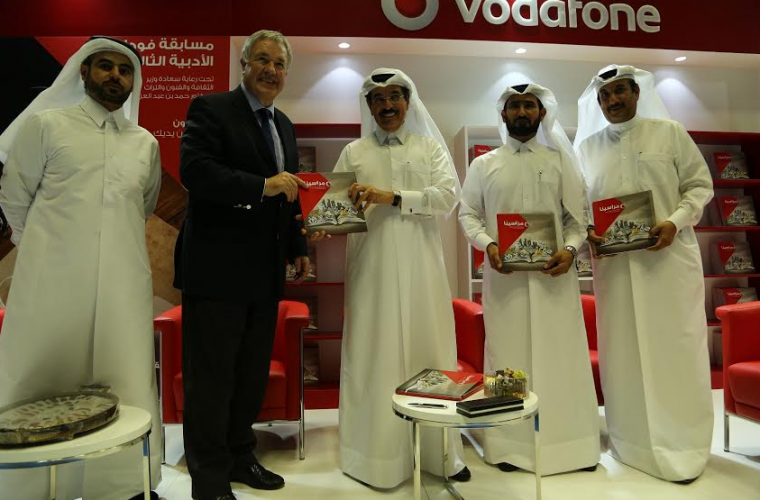 Vodafone launched the third edition of its annual literary competition, under the patronage of H.E Dr. Hamad Bin Abdulaziz Al Kuwari, the Minister of Culture and Heritage. This is the third year the Minister has given his backing to the project joining Vodafone officials, including Chief Executive Officer Ian Gray and Chief External Affairs Officer Mohammed Al Yami, at ceremony to inaugurate, as well, the company’s pavilion at the Doha Exhibition Centre where the 26th Doha International Book Fair is running between December 2-12, 2015.

This year, Vodafone published some of the best literary works of 2013-2014, identified by the competition’s jury board, in a book called Marasina made available for visitors of the Doha International Book Fair in both regular print and Braille form.

Once again, Vodafone’s literary competition is inspired by the theme of this year’s Qatar National Day celebrations, “Our help carries joy to the aggrieved” - a verse that comes from a poem written by Qatar’s founder Sheikh Jassim Bin Mohammed Al-Thani.

The first edition of Vodafone’s literary competition came to light in December 2013 with the aim to help preserve the Arabic language, encourage creative writing, celebrate the beauty of the written Arabic word, and very importantly to pay tribute to Qatar’s National Day. The competition proved to be a great success with over 100 short story and novel submissions. This was followed by several of the submissions being published by leading Arab publishing houses. In 2014, Vodafone registered over 130 submissions attesting to the competition’s wide acclaim nationwide.

At the launch, Minister of Culture and Heritage, H.E Dr Hamad Bin Abdulaziz Al Kuwari, said, “The preservation of the Arabic language is a pledge made by our country’s leadership and is a path we should all follow and support. Vodafone’s annual literary competition is a great example of that and I encourage more of these initiatives to help grow our appreciation of this essential thread of our history and legacy.”

Commenting on the initiative, Vodafone Qatar’s Chief External Affairs Officer, Mohammed Al Yami stated, “The fact that we’ve taken this competition into its third edition strongly demonstrates the success of this initiative and our steadfast commitment to play a role in preserving one of the key pillars of our Arabic culture and tradition. We are extremely proud to receive, once again, the esteemed patronage of H.E Dr Hamad Bin Abdulaziz Al Kuwari, Culture and Heritage and aligning our competition with the theme of Qatar National Day gives the opportunity to all aspiring and established writers to express their love for this great country.”

The competition is open to all citizens and residents from 3 December 2015 until 1 February 2016 and the submissions for both the competition’s categories have to be in the Arabic language:

Category 1:Taking inspiration from the competition’s theme “Our help carries joy to the aggrieved”, the first category is for the best historical story. It should aim at enhancing the spirit of patriotism through ancient or modern history. The story may also be on a heroic event of an influential figure in Qatar’s history. Participants can also work on a key historical event, or a story that talks about a leading historical figure who led the nation’s renaissance. However, please do not indulge in historical details at the expense of literary flair. Submissions have to be in the form of a story between 2000 – 2500 words.

The prizes for this category are:

Category 2:The second category is for the best narrative poetry (poem) written in classical Arabic, which also aims to enhance patriotism through one of the following two topics:

- A national issue that deepens patriotism, loyalty, the sense of belonging, sacrifice…etc.

- A key historical event related to the well-known expression about Qatar as ‘The Bosom of the Oppressed’ “Kaaba Almdiom” highlighting Qatar’s authentic values.

The panel of judges – Qatari literary and luminary experts – will convene in February 2016 to agree the winners who will be announced in March 2016.