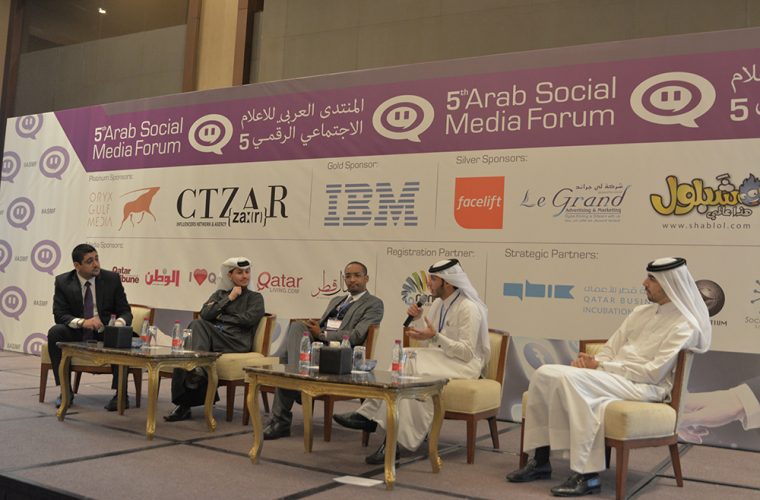 The 5th edition of the Arab Social Media Forum, was held on Sunday, 21 December & discussed the status of the Social Media industry in the Arab world in general and Qatar in specific and its important role in various purposes, in terms of communication and marketing, businesses (start- ups or Enterprise) or even at governments & NGOs.

The forum was inaugurated by Founder and General Manager Mr. Malik Shishtawi, with presence of a number of key international figures and specialists in social media & more than 200 social media-oriented enthusiasts attended the forum.

After the welcome note, ictQATAR’s Rassed Unveiled Findings of New Study into Social Media Usage in Qatar, followed by another presentation by IBM about leveraging the power of Social Technology.

More than 20 Speakers & Panelists discussed several topics in Social Media, in terms of the proper use of social networks like Facebook, Twitter, Instagram and YouTube properly, & how to build a successful strategy for using Social Media, within five discussion panels which targeted different segments, & followed by a workshop for the audience, announced after the conclusion of the Forum.

The Forum, which is considered as one of most important industry events in the region has received the support of several International, Regional and local companies & organizations, and attracted delegates, not only at the local level but also from several countries such as the UAE, Oman and Saudi Arabia, in addition to the Kingdom of Bahrain, which had more than 15 delegates attending this edition of the forum.

The support of the local community is always a priority to the Forum’s management and therefore complementary entry permits were offered to several student clubs, especially the Students Media Club of Qatar University, in addition to supporting entrepreneurs and small businesses by giving them free space in the forum exhibition in collaboration with the Qatar Business Incubation Center.

This success came after four previous successful editions of the forum in Jordan, Palestine, Saudi Arabia, in addition to a three new editions to be announced soon in Bahrain and the United Arab Emirates and the Sultanate of Oman.