Startup of the Week: Charge your mobile phones as you sweat with Kinecto! 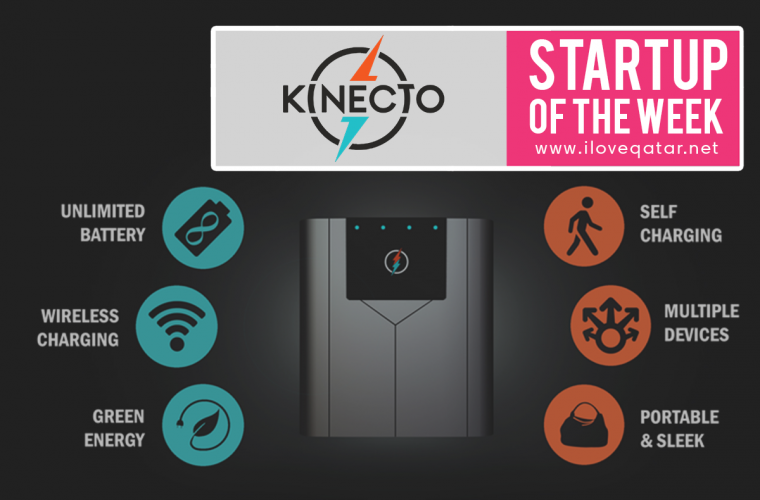 Every Thursday, ILQ features a different Qatari startup in our ‘Startup of the Week’ segment. Qatar has some of the most creative, unique, and impactful startups in the region, and we cover them all across a variety of industries in Doha—from fashion and beauty, to food and dining, health, education, technology, and more!

This week, we're unplugging the wires for Kinecto—a patent pending wireless power bank that revolutionizes the process of charging through motion and being active!

Over the past decade, electronic devices and gadgets have become a part of our daily lives. But, without power, these devices are merely bricks that have no use or purpose. This is the drive that the startup's young founders used to make Kinecto come to life.

The idea is to carry the pocket-sized Kinecto around with you on a normal day as it stores energy to the device using your physical activities and the energy that you've gathered is what you will use to charge and fill up your mobile phone's battery. And because the device is wireless, you never have to carry a wire, power bank, or another battery with you again.

With Kinecto, become your own power source and remove charging from your lives.

Rabia Ahmad Mughal, one of the founders, said that people nowadays are dependent on their devices to accomplish their tasks throughout the day and an excessive amount of time and energy is wasted charging their devices. "Kinecto is an innovative, sustainable, and convenient way to solve this everyday problem," she continued.

Kinecto is a technology startup that began its journey in March 2017 after participating and winning one of the local innovation competition called 'Quick Startup' organized by Carnegie Mellon University. The idea came about after a brainstorming session between the founding members in which everyone constantly complained about their phone’s dying battery. Since then, Kinecto’s passionate team has conducted extensive customer validation, developed a fully-functional prototype, and participated and won several local and international competitions.

Highlighting the elimination of wires, plugs, and sockets needed to charge any device, Rabia mentioned that Kinecto is the first-ever gadget to charge and transfer energy wirelessly—essentially removing the process of charging as a conscious activity.

"The kind of technology that Kinecto is using doesn't exist anywhere else in the world and is highly scalable. For this reason, the team has already filed for a global PCT patent in order to protect this technology and further grow the business."

When asked about the early customer reception that Kinecto is getting, Rabia has this to say: "We've received a great response from our target customers and this shows that there is definitely a need for a device like this in the market."

She further added that Kinecto is now enjoying several of preorders for their first device called 'Kinecto X' which will be designed and manufactured right here in Qatar. The team has also signed Letters of Intent worth QAR 280,000 with several retailers to carry Kinecto once it comes out.

Kinecto is currently being incubated at the Qatar Business Incubation Center where the team has been operating from for the past year. Through extensive research and development, Rabia and her colleagues have developed the first fully functional prototype. This device can charge your phone from 0% to 100% with only 5,000 steps. Currently, they are using QBIC FabLab’s resources to develop the first ever units of the device.

Encouraging her fellow Doha-based entrepreneurs to give their business a ideas a GO as long as they think that it's relevant and sustainable, Rabia noted startups' significant role in the economic growth of any country including Qatar. "Recently, Qatar’s economy has come under a lot of pressure due to regional events and, therefore, startups are critical to boost innovation, employment, and diversity in the economy."

The team is launching the device for the first time in Qatar and Kinecto is currently available to preorder through their website. Qatar will be the first country to experience this revolutionary device before it goes global so make sure to be among the first ones to get your hands on Kinecto and FINALLY remove charging from your lives!

To know more about Kinecto, check out their, website and social media links below!

What are some of your favorite startups around Doha? Comment below! And also, don’t forget to give us a like and share -- it keeps us going!