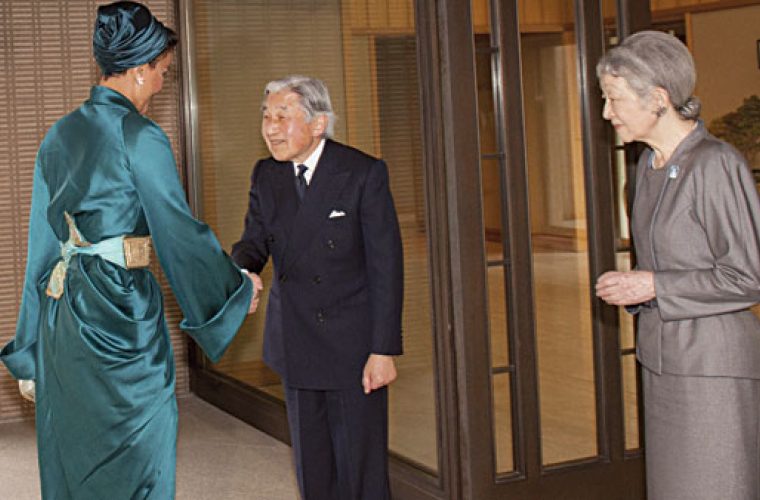 They also discussed issues of mutual concern especially the flourishing relations between Qatar and japan.

Also yesterday, as part of her visit to Japan, Sheikha Moza visited the Sony Corporation Headquarters in Tokyo.

Talks during the meetings dealt with ways of using new technology for social benefit and the prospects of future co-operation between technology institutes in Japan and Qatar Institute for Computing Research.

Sheikha Moza said that her visit aims to move the Qatari-Japanese relations to a new stage based on scientific co-operation to face the challenges of the 21st century.

The visit comes after a series of meetings held in Doha last year between senior executives at Sony Corporation and senior Qatari officials, including Northwestern University in Qatar.

The students said that the ir reason for choosing Japan to complete their higher education is the country’s progress in the fields of scientific research and engineering, as well as their willingness to recognise the unique Japanese culture which has some values similar to Arab culture and traditions.

Sheikha Moza reaffirmed her support and encouragement to the Qatari students in Japan.

Sheikha Moza is on a five-day exploratory research visit to Japan.

The visit seeks to strengthen ties between the two countries in the fields of research and development, with a focus on computing, energy, environment and biomedical research.

Sheikha Moza is accompanied by a high-level delegation from Qatar Foundation’s Research and Development, in order to identify and enhance collaboration between QF and a number of globally renowned research institutes in Japan.

The areas of collaboration have been identified in line with the ‘grand challenges’ of Qatar’s National Research Strategy, ie energy security, water security, cyber security.

The priority challenges identified in the Qatar National Research Strategy (QNRS) are to achieve: energy security, through raising the production of solar energy to 1 gigawatt by 2020; water security, through promoting the scientific research in the area of water desalination; cyber security, through strengthening information security management in an electronically open and overlapped space; and health promotion, through preventing and managing diseases such as diabetes and cancer and by advancing platform technologies such as genomics and stem cells.