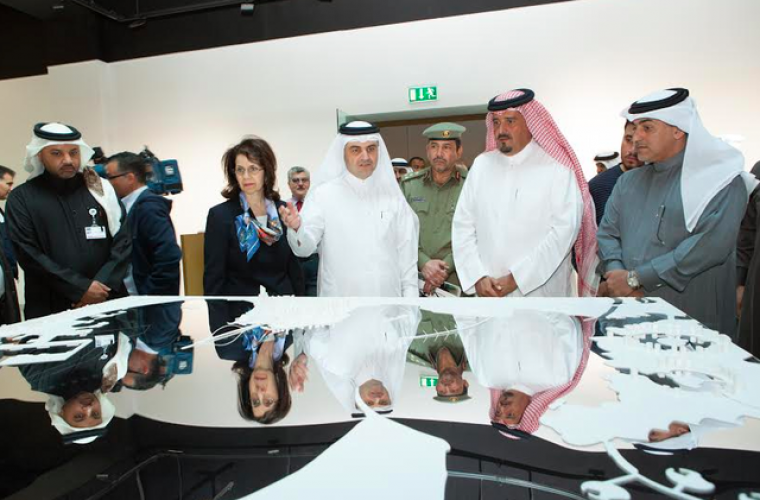 Under the patronage of H.E the Minister of Municipality and Urban Planning (MMUP), Sheikh Abdul Rahman bin Khalifa Al Thani, Qatar’s Public Works Authority ‘Ashghal’ today unveiled one of the country’s most important infrastructure projects that will provide an iconic image for the city of Doha to the world. In the presence of honourable H.E the Minister, senior government dignitaries, Ashghal officials and media representatives Eng. Nasser Bin Ali Al-Mawlawi, President of Ashghal announced the Sharq Crossing project. Doha’s Sharq Crossing will be one of the most ambitious engineering projects ever undertaken in the Middle East, comprising three iconic bridges interconnected by subsea tunnels spanning a ten kilometre stretch of water and linking Doha’s Hamad International Airport with the city’s cultural district of Katara in the north and the downtown central business district of West Bay. The 12 kilometre project is designed by world renowned architect, engineer and artist Santiago Calatrava and will become an icon for Qatar. The project is one of the most technologically advanced building and complex programmes being undertaken by Ashghal to enhance Qatar’s transportation network ahead of the FIFA World Cup 2022 and to fulfil Qatar National Vision 2030. “Sharq Crossing is an engineering masterpiece of design, and while providing an important new artery to Doha’s existing road network, it will be instantly recognisable across the world and will be an emblem for Qatar,” said Ashghal’s President H.E Eng. Nasser Bin Ali Al-Mawlawi. “Ashghal, in collaboration with its partners, is confident that once complete, this technical and engineering marvel will be one of the most outstanding structures in the world.” The project will boast three inter-connected Sharq Crossing bridges, between 600 and 1,310 metres in length and connect to eight kilometres of subsea tunnels. Calatrava’s design is inspired by natural forms, and draws from the image of flying fish to form iconic arcs which will provide a stunning addition to Doha’s skyline. “Architecture for public works humanises the natural landscape and serves the community. The Sharq Crossing project for Doha is a great opportunity to develop an exceptional and grand piece of public work,” said Santiago Calatrava. The Sharq Crossings comprises three interconnected bridges, named “West Bay”, “Cultural City”, and “Al Sharq”. The most intricately designed of the three bridges, West Bay, will be a two-deck arched structure incorporating a recreational park that can be accessed via an elevated walkway and a funicular cableway and will also include hospitality and recreation facilities that will make the most of the panoramic view of the city’s skyline. Passengers will be transported into the central business district along the top of the arch structure providing spectacular views of the city and the coastal environment around Doha. Implementing the most stringent international design standards, the Sharq Crossing bridges have been designed with a minimum number of supports to reduce long-term impact to the marine environment. Sharq Crossing’s subsea connected tunnel links will provide an expressway of three lanes in each direction between Doha’s Hamad International Airport and West Bay; and two lanes in each direction between West Bay and Lusail. The crossing tunnels have been designed to meet strict international traffic management and safety requirements. To further enhance safety criteria, heavy goods vehicles will be excluded from accessing Sharq Crossing. Health and safety has been carefully considered across all aspects of the crossing and specifically tunnel design, combining enhanced fire-resistant structures with ventilation, smoke exhaust and dedicated pressurized escape routes. Ashghal has appointed Fluor Corporation as the programme management consultant for construction supervision of Sharq Crossing, which is estimated to commence by 2015. Stephen B. Dobbs, Group President, Industrial & Infrastructure at Fluor Corporation said: “As a company of builders, Fluor is proud to be associated with such an iconic project. It is clear Sharq Crossing will be a prominent feature in the world's image of Qatar as the country is showcased on the world stage.” - ILQ News -