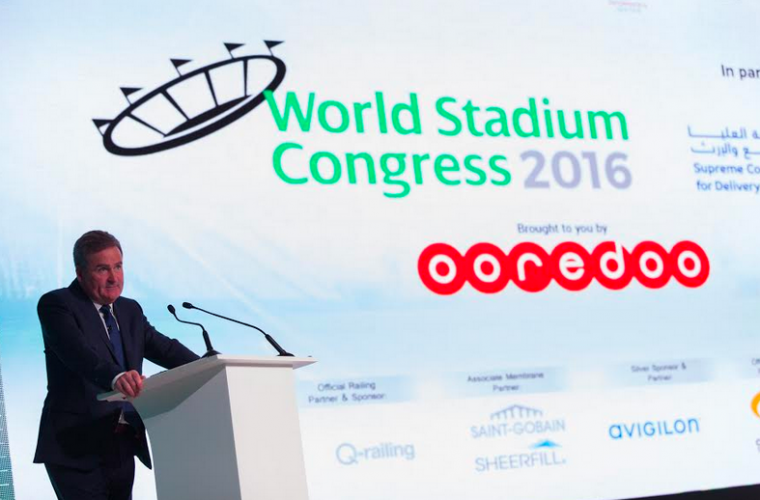 The World Stadium Congress – in partnership with the Supreme Committee for Delivery & Legacy, congregated over 300 of the globe’s most reputable stadium operators, architects and contractors, as well as federation directors, government officials, renowned athletes and tournament stakeholders.

Organised by IQPC, the first day of the conference on Day One boasted an unparalleled, diverse and prestigious speaker faculty representing four continents from a wide array of sport and stadia organisations.

Hosted by world famous sports broadcaster and journalist Richard Keys, the summit commenced with an honorary introductory address from Ooredoo Qatar, serving as an advocate for smart stadium technology for modern stadium and venue excellence in preparation for 2022 FIFA World Cup Qatar™ and beyond.

Eng. Othman Zarzour, Competition Deputy Venues Executive Director from the Supreme Committee for Delivery & Legacy, presented on competition venues in Qatar and laying the foundation for an effective World Cup preparation and execution.

He said: “I’d like to thank our partners and the organisers, for their hard work. This summit brings together local, regional and international experts on sports and stadia, encouraging discussions on innovative stadia design, construction and operation of major sporting venues and the legacy that will benefit the country’s communities in line with the Qatar National Vision 2030.”

The summit then proceeded with multiple break-out sessions, including a Dragon’s Den concept that allowed the world’s most relevant stadium solution providers, such as EMC, the chance to ‘pitch’ their systems to the likes of Tamim El-Abed, Project Manager – Lusail Stadium from the Supreme Committee for Delivery & Legacy; Florian Alles, Chief Architect from gmp Architektenvon Gerkan; Chris Dite, Associate Director, Sport VenueDesign and Major Events from Arup, as well as others for live and interactive feedback.

As Day One came to a close, the gathering effectively and comprehensively covered stadium technologies, security protocols, legacy programmes and more – looking at both regional and global case studies and demands.