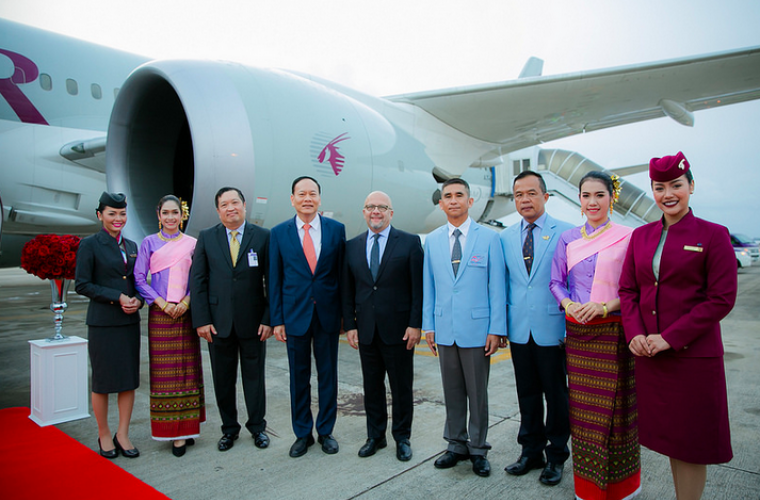 Qatar Airways Group Chief Executive, His Excellency Mr. Akbar Al Baker, said: “We are delighted to be the first Middle East airline to offer direct flights to Pattaya. Having also launched flights to Chiang Mai in Thailand just last month and soon to launch our sixth-daily flight to Bangkok, this new route reinforces and deepens the strong ties that exist between the State of Qatar and the Kingdom of Thailand.

“Thailand is continuing to grow in popularity among our passengers. We launched this new route in direct response to increasing demand from our passengers, and we are proud to be able to fly them on our aircraft to experience our unrivalled five-star service. We are excited to offer our travellers more destinations to choose from in the Far East, and to connect the people of Pattaya to Qatar Airways’ extensive global network of more than 150 destinations around the world.”

Pattaya is a major resort city located on Thailand’s eastern Gulf coast, and a popular holiday destination for travellers from both within Thailand and abroad, seeking to experience the local Thai hospitality and culture, or relax on one of Pattaya’s long, stunning beaches. The main attractions include the three kilometre-long Pattaya beach that runs parallel to the centre of the city, the Sanctuary of Truth traditional wooden temple, a floating market and extensive shopping areas.

Qatar Airways’ new four-times-a-week service to Pattaya offers five-star comfort on its Boeing 787 Dreamliner aircraft, with 22 seats in Business Class and 232 seats in Economy Class. Passengers on board will be able to enjoy the airline’s superior entertainment system, Oryx One, offering up to 4,000 entertainment options to choose from.

In the second half of 2017, Qatar Airways expedited its ambitious expansion plans with launches to a number of popular destinations including Skopje, Prague, and Kyiv in Eastern Europe; Adana, Turkey; St Petersburg, Russia and Chiang Mai, Thailand. The airline will be adding flights to many more exciting destinations in 2018, including Malaga, Spain; Mykonos, Greece and Cardiff, United Kingdom, to name just a few.

In the last year, the award-winning airline received more than 50 individual awards across multiple categories, including the prestigious accolade of 2017 ‘Airline of the Year,’ awarded by international air transport rating organisation Skytrax to Qatar Airways for the fourth time. Qatar’s national carrier also won a raft of other major awards, including ‘Best Airline in the Middle East,’ ‘World’s Best Business Class’ and ‘World’s Best First Class Airline Lounge.’

The national carrier of the State of Qatar is one of the fastest-growing airlines operating one of the youngest fleets in the world. Qatar Airways has a modern fleet of more than 200 aircraft flying to business and leisure destinations across six continents.