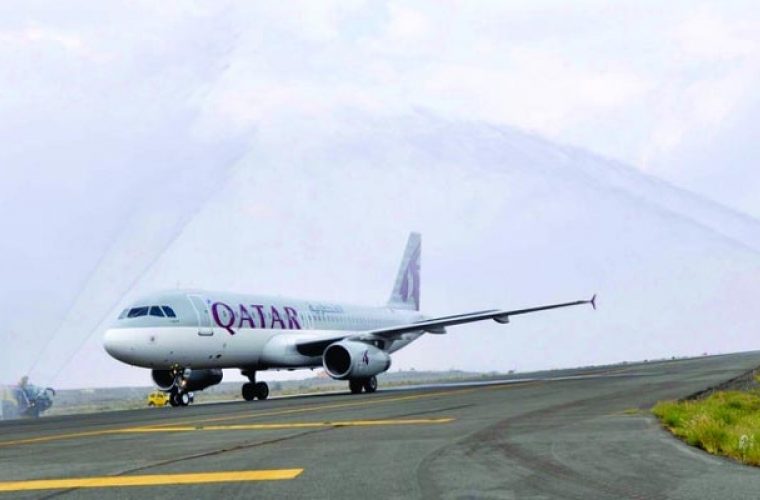 Qatar Airways has launched services to its eighth destination in Saudi Arabia, Abha, with four flights a week.
The inaugural flight landed at Abha International Airport at 3.40pm on Wednesday.
Qatar Airways flight QR1212 was welcomed with a traditional water salute. The airport ceremony was hosted by Qatar Airways senior vice-president (Aero Political & Regulatory Affairs) Ali al-Rais.
At the official ceremony, Tariq al-AbdulJabbar, assistant vice-president of Domestic Airports, welcomed the first Qatar Airways flight to Abha, followed by an exchange of gifts with Abha International Airport officials.
“We have been steadily growing our presence and services to Saudi Arabia for the past 18 years,” said Qatar Airways Group chief executive Akbar al-Baker. “As our eighth destination in the Kingdom, Abha will bring additional flexibility for passengers connecting from Asia, the Middle East, Europe and the Americas.
“From Abha, our passengers will now be able to travel seamlessly through our state-of-the-art Doha hub, Hamad International Airport, to popular cities such as London, Paris, Bangkok, Singapore, New York and Washington. At the same time, this will provide passengers travelling to Saudi Arabia from international markets with the convenience of another gateway.”
Qatar Airways began operations to Saudi Arabia in 1997 with non-stop flights to Jeddah. The airline has added Riyadh, Dammam, Madinah, Gassim, Ta’if and Al Hofuf to its portfolio of destinations, all non-stop to and from Doha, with connections to most of Qatar Airways’ destinations worldwide.
The addition of Abha to the Qatar Airways network will increase the number of weekly services to Saudi Arabia to 88 non-stop flights.
The new route will be operated by an Airbus A320 with an average flight time of just over two hours. The aircraft will feature 144 seats in a two-class configuration of 12 seats in business class and 132 seats in economy.
Selected aircraft will feature seat-back TV screens, providing passengers with the interactive on-board entertainment system, Oryx One, featuring a choice of more than 900 audio and video on-demand options together with an SMS text messaging service from each seat.
The city of Abha is the capital of Asir, a southwestern province in Saudi Arabia, rapidly gaining popularity in the region as a tourist destination due to its attractions, mild seasonal weather and breathtaking mountains.
Flight schedules between Doha and Abha are as follows (Monday, Wednesday, Thursday and Saturday): QR1212 departing Doha at 1.10pm and arriving in Abha at 3.40pm, and QR1213 departing Abha at 4.40pm and arriving in Doha at 6.55pm.