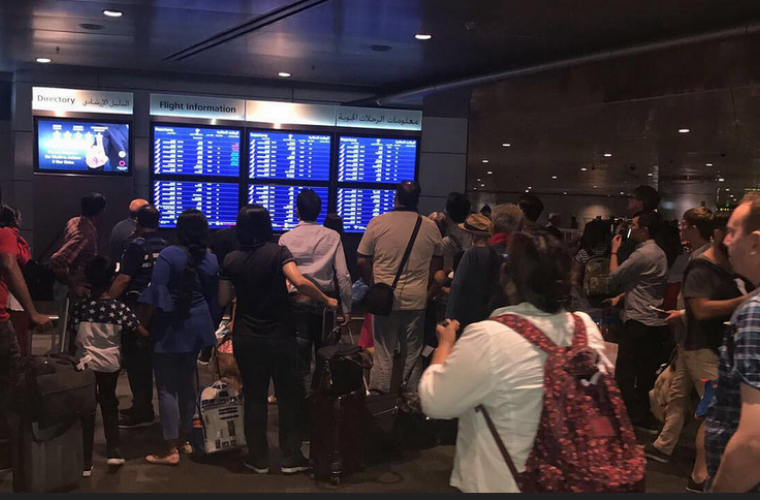 Qatar Airways Group Chief Executive Akbar al-Baker said, “In spite of recent restrictions imposed on the airline, our operations to and from Doha remain resilient and are running smoothly. In the past seven days, 510,949 passengers have flown from Hamad International Airport on board more than 2,900 flights. During the peak Eid al-Fitr holiday period, June 22-24, 49,794 of those passengers were joining flights directly from Doha.”

HIA chief operating officer Badr al-Meer said the airport "has had a very busy" Eid period with the total number of passengers travelling on all airlines, including national carrier Qatar Airways, from June 19-25 reaching 580,000, adding that there were 3,300 movements during this time. "Hamad International Airport continues to urge passengers to arrive early for check-in during this busy holiday period.”

HIA recently reported that it served 19mn passengers from January to June 2017, 8% more than those served in the same period in 2016.

Qatar Airways continues to operate to the majority of its network of more than 150 destinations around the world, with 90% of those flights departing within 15 minutes of their scheduled departure time.

In a statement, the airline stressed it shows no sign of slowing down its rapid network growth, having launched its new service to Dublin, Ireland, on June 12. This will be followed by new route launches on July 4 to Nice, France, and July 17 to Skopje, Macedonia.

Other new destinations planned for the remainder of this year and 2018 include Las Vegas (US), Canberra (Australia), Douala (Cameroon), Libreville (Gabon), Medan (Indonesia), Rio de Janeiro (Brazil), Santiago (Chile), Sarajevo (Bosnia and Herzegovina) and others.

Earlier this month, the airline released its annual report for the fiscal year 2017, revealing a net profit of $541mn, a 21.7% year-on-year increase. The results also show an annual revenue increase of 10.4%.

Reflecting the ongoing success of Qatar Airways, the airline was awarded the Skytrax Airline of the Year award for the fourth time at the 2017 Paris Air Show. In addition to this award, it was also named Best Airline in the Middle East, World’s Best Business Class and World’s Best First Class Airline Lounge. Qatar Airways' home and hub, HIA, was this year also rated five-star by Skytrax, one of only five in the world to be given this recognition.

* Qatar Airways reports that more than 500,000 passengers have travelled during the busy Eid al-Fitr week

* HIA welcomes more than 580,000 passengers over the peak holiday period