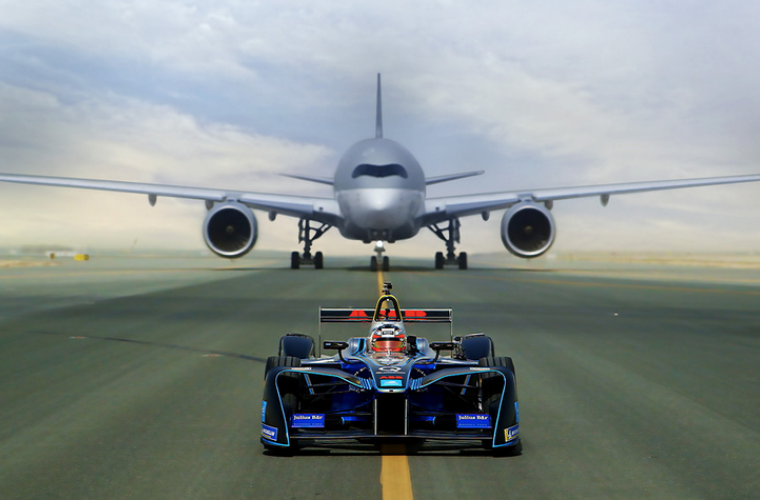 Qatar Airways has today revealed a breathtaking exclusive video of a head-to-head race between the Formula E Spark SRT-01E race car and the airline’s latest generation Boeing 787 Dreamliner and Airbus A350 aircraft, at the airline’s home and hub, Hamad International Airport (HIA), to celebrate its partnership with the electric street racing series.

The head-to-head race, showcased in the video to the amazement of fans of the World's Best Airline around the globe, first shows a race between the state-of-the-art Airbus A350 upon takeoff alongside the latest-generation electronic Forumla E series race car. This is swiftly followed by a second spectacular race as a Boeing 787 Dreamliner touches down at HIA, which was just last week ranked the fifth Best Airport in the World by the international Skytrax World Airport Awards 2018.

Qatar Airways Group Chief Executive, His Excellency Mr. Akbar Al Baker, said: “Qatar Airways strives to always be ahead of the curve when it comes to its environmental credentials and flying one of the most modern fleets in the sky. For our sporting partnerships, this is as important to us when represented as a sponsor, which is why we have chosen the future of motor racing and Formula E with their latest environmentally friendly technology, which they combine into this exciting sport. We trust that our loyal passengers and fans of Formula E around the world will enjoy watching this race, in anticipation of finding out exactly who will win this thrilling event.”

Founder and Chief Executive Officer of Formula-E, Mr. Alejandro Agag, said: “It is great to be working with a partner who shares our values in sustainability, and Qatar Airways is a global brand who is leading this charge. This breathtaking video demonstrates our shared passion to strive for excellence. Formula E races take place in the heart of some of the world’s greatest cities, such as Paris and New York, with the support of Qatar Airways to help us in going places together.”

Each of the exciting races were driven with Formula E and DRAGON driver Mr. Jerome D’Ambrosio, during which the first race commenced with a fixed start line and ended with the aircraft taking off into the skies above the State of Qatar.

Qatar Airways believes in the power of sport in bringing people together and sponsors many top-level sporting events around the world. As well as sponsoring Formula E, Qatar Airways is also the Official Airline Partner of FIFA, which includes 2018 FIFA World Cup Russia™, the FIFA Club World Cup™, the FIFA Women’s World Cup™ and the 2022 FIFA World Cup Qatar™.

Qatar Airways proudly flies one of the youngest fleets in the sky, featuring the world’s most technologically-advanced and environmentally friendly aircraft. Qatar Airways operates more than 200 modern aircraft to a network of more than 150 key business and leisure destinations across Europe, the Middle East, Africa, Asia Pacific, North America and South America. The airline is continuing its ambitious expansion plans, and will launch a host of exciting new destinations this year, including Cardiff, United Kingdom; Lisbon, Portugal; and Mykonos, Greece, to name just a few.