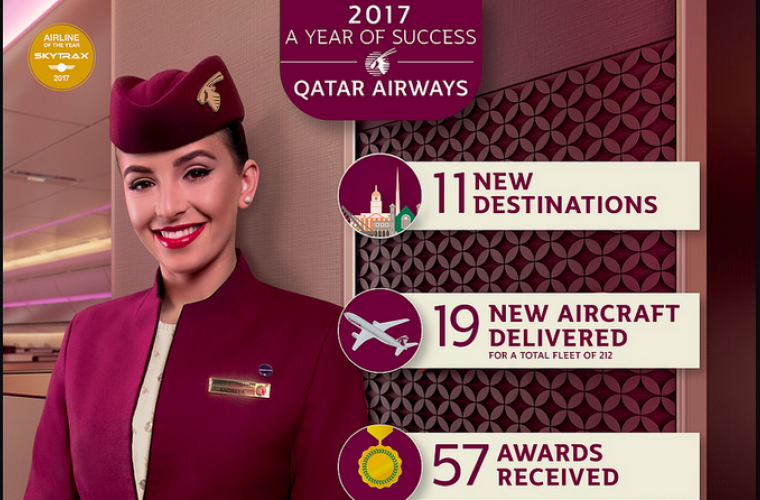 Qatar Airways is celebrating a successful year of tremendous growth, network expansion and a record-breaking number of award wins at the end of this, its 20th year of operations.

Despite a challenging regional environment, the airline continued to deliver beyond expectations throughout 2017, accelerating new routes, doubling frequencies and capacity to numerous destinations and launching its award-winning new Business Class seat, Qsuite. At a time when many airlines are scaling back, Qatar Airways continued to thrive, showcasing to the world its award-winning, best-in-class cabins, catering, in-flight entertainment, on-board magazine, lounges and more.

Qatar Airways Group Chief Executive, His Excellency Mr. Akbar Al Baker, said: “This year, our twentieth anniversary as an airline, is particularly special for us. As we reflect on our achievements, we reaffirm our commitment to providing excellence in the skies, ensuring that our passenger’s holiday or leisure trip starts the moment they step onto one of our aircraft. We remain committed to expanding our global network, and to taking our passengers anywhere in the world they wish to go.”

“After twenty years of service, we vow to never rest on our achievements, but rather to focus on how we can continue to innovate, and to deliver an exceptional five-star experience to every one of our passengers, no matter what class they travel. Against the backdrop of the illegal blockade against the State of Qatar, we are more committed than ever to welcoming everyone onboard and taking them wherever they need to go.”

In addition to launching flights to beautiful Chiang Mai, its fourth destination in Thailand, the airline also introduced a fifth daily non-stop service to Bangkok as well as a daily service to Krabi, offering both business and leisure travellers even more convenience and flexibility when travelling to and from the Land of Smiles. In January 2018, it will commence service to Pattaya, the airline’s fifth Thai destination.

The airline introduced its superjumbo A380 aircraft to Melbourne and will soon introduce it on its Perth route, enhancing capacity to Australia ahead of the airline’s launch of service to Canberra in 2018. Qatar Airways also proudly became the first airline ever to fly the state-of-the-art Airbus A350 to the Maldives twice daily.

Qatar Airways also doubled its frequencies to a number of destinations in Eastern Europe, the Nordics and Russia, following a significant increase in passenger demand to the popular destinations of Warsaw, Helsinki, and Moscow, with increases to Prague and Kyiv following just shortly after the launch of the routes themselves.

Qatar Airways proudly launched its new Business Class seat, Qsuite, at ITB Berlin in March 2017 to outstanding global acclaim, bringing a First Class experience to the Business Class cabin. The first aircraft fully-fitted with Qsuite was launched on the Doha-London route during the summer, and was soon followed by Paris and most recently New York, with Washington soon to follow. Qsuite, a patented Qatar Airways product, is already fast collecting awards for offering the industry’s first-ever double bed in Business Class. Adjustable panels and movable TV monitors allow colleagues, friends or families travelling together to transform their space into a private suite, allowing them to work, dine and socialise together.

Qatar Airways enjoyed a record-breaking year in 2017, with the airline claiming more global awards than ever before in its 20th year of operations. Qatar’s national carrier received more than 50 individual awards across multiple categories since January, demonstrating its continued commitment to exceeding passenger expectations with its innovative approach to product development and dedication to customer experience.

Leading the host of awards received by the airline this year is the prestigious accolade of 2017 ‘Airline of the Year,’ awarded by international air transport rating organization Skytrax. Qatar Airways was named ‘World’s Best Business Class,’ ‘Best Airline in the Middle East,’ and ‘World’s Best First Class Airline Lounge’ at the Skytrax awards ceremony held in Paris in June.

Notably, Qatar Airways Group Chief Executive, His Excellency Mr. Akbar Al Baker, received the ‘Aviation Executive of the Year’ award from industry body CAPA last month, highlighting his leadership and innovative direction in guiding the growth of the airline and the wider aviation industry as a whole.

H.E. Mr. Al Baker was also elected Chairman of the Board of Governors of prestigious global aviation industry body International Air Transport Association (IATA), effective June 2018. The rotating one-year term will commence at the end of IATA’s 2018 Annual General Meeting (AGM) in Sydney and will continue until the end of its 2019 AGM.

Qatar Airways took delivery of 19 new aircraft in 2017, taking its total fleet to 212 aircraft. The airline also recently upsized an earlier order for 50 Airbus A320neo with a firm order instead for 50 of the larger A321neo ACF (Airbus Cabin Flex configuration), in an order signed earlier this month in the presence of the Emir of the State of Qatar, His Highness Sheikh Tamim bin Hamad Al Thani, and French President Mr. Emmanuel Macron.

The airline further strengthened its commitment to Italy with the acquisition of 49 per cent of AQA Holding, the new parent company of Meridiana fly (Meridiana), while the previous sole shareholder Alisarda has kept 51 per cent.

In June Qatar Airways released its annual results for the 2017 fiscal year, revealing an impressive 21.7 per cent year-on-year net profit increase. The results also showed an annual revenue increase of 10.4 per cent.

Qatar Airways Cargo’s continuous investment in ground infrastructure has proven its capability and capacity to accommodate increased demand since the diplomatic blockade on the State of Qatar began in June. The cargo carrier opened two new facilities during the summer, its dedicated Climate Control Centre and Cargo Overflow structure, providing close to an additional 10,000 sqm of temperature-controlled handling space to manage an increase in food imports into Qatar.

Qatar Airways Cargo recorded high volumes, revenues, yields and market shares in 2017, and was the only international cargo carrier with significant growth in freight tonnes kilometres (FTK) this year.

Corporate Social Responsibility remained an important part of Qatar Airways’ values in 2017. The airline renewed its sponsorship as Official Airline Partner to Orbis UK for a further three years. The airline has been a proud sponsor of Orbis and its blindness prevention programmes since 2012. Qatar Airways also continued to be a proud supporter of the Educate-A-Child programme, which helps provide quality primary school education to millions of out-of-school children globally.

Qatar Airways also responded to demand from passengers seeking to transport their pets around the world by reducing the price to the lowest rates ever into and out of Doha. As the only airline that will carry pets as excess baggage to and from Qatar, the airline significantly reduced the cost of travelling with a pet.

Qatar Airways looks ahead with excitement to 2018, when it will launch a host of exciting new destinations, including Penang, Malaysia; Canberra, Australia; Thessaloniki, Greece and Cardiff, Wales, the airline’s fifth UK gateway, to name just a few. The airline will also be the global launch customer and launch operator of the Airbus A350-1000 in 2018.

The highest standards of excellence, perseverance and a commitment to innovation are the values that have led Qatar Airways to be named the World’s Best Airline in 2017, and which it will carry with it into 2018.