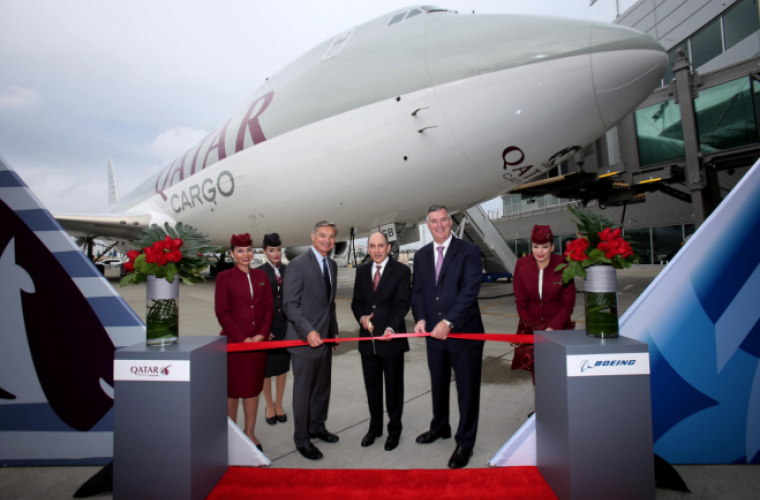 Qatar Airways has announced an order for two Boeing 747-8 Freighters and four 777-300ERs, valued at $2.16 billion at list prices. The order, a sign of the airline’s continued expansion and contribution to the US economy, adds to the airline’s current fleet of nearly 100 Boeing widebody airplanes and its more than 100 additional Boeing aircraft on order.

The announcement was made at a delivery ceremony in Everett, Washington, where the airline also received the first of its 747-8 Freighters. The ceremony was attended by Qatar Airways Group Chief Executive, His Excellency Mr. Akbar Al Baker, Boeing Vice Chairman, Mr. Ray Conner, and Boeing Commercial Airplanes Chief Executive Officer, Mr. Kevin McAllister.

Qatar Airways Group Chief Executive, His Excellency Mr. Akbar Al Baker, said: “Qatar Airways operates one of the youngest and fastest-growing fleets in the sky, and Boeing unceasingly proves to be a valuable partner to us in providing the quality aircraft that make us the world’s third largest international cargo carrier. We are very appreciative of our enduring partnership with Boeing, as it is key to our future growth, and we look forward to continuing to work with this important US partner.”

Boeing Commercial Airplanes Chief Executive Officer Mr. Kevin McAllister said: “We are proud of our strong, enduring and growing partnership with Qatar Airways and we truly appreciate the value its business has brought to Boeing, its employees, suppliers and our communities. As one of the world’s largest international cargo carriers, it is heartening that Qatar Airways has selected the 747-8 Freighter to meet its growing cargo operations and to see the important role the 777-300ER continues to play in its long-haul fleet.”

There have been many milestones in Qatar Airways’ relationship with Boeing, and this announcement is the latest development in this strong relationship. Qatar Airways was the first airline to operate the 787 in the Middle East, is a launch customer for the 777X, and has twenty 737 MAX airplanes on order. In 2016 the airline placed a record $11.7 billion order from Boeing for 30 B787-9 Dreamliners and 10 777-300ERs.

The 747-8 Freighter gives cargo operators the lowest operating costs and best economics of any large freighter airplane while providing enhanced environmental performance. It is optimised to provide greater revenue cargo-carrying capability than the 747-400, offering 16 per cent more cargo volume while keeping its unique nose door.

Qatar Airways has a host of exciting new destinations planned for the remainder of this year and 2018, including Canberra, Australia; Chiang Mai, Thailand and Mombasa, Kenya, to name just a few.

The national carrier of the State of Qatar is one of the fastest-growing airlines operating one of the youngest fleets in the world. Now in its twentieth year of operations, Qatar Airways has a modern fleet of 200 aircraft flying to business and leisure destinations across six continents.

The award-winning airline has received a number of accolades this year, including Airline of the Year by the prestigious 2017 Skytrax World Airline Awards, which was held at the Paris Air Show. This is the fourth time that Qatar Airways has been given this global recognition. Qatar’s national carrier also won a raft of other major awards at the ceremony, including Best Airline in the Middle East, World’s Best Business Class and World’s Best First Class Airline Lounge.

What are your thoughts on this momentous aviation purchase on behalf of our national carrier? Drop us a line in the comments below and let us know your thoughts! Also, don't forget to like and share this article.