Qatar Airways’ A350-1000 touches down in Doha, marking another World First for the Airline 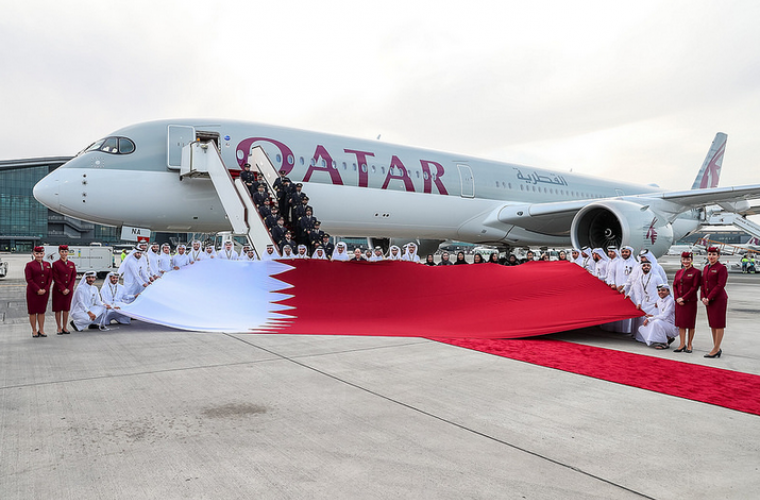 Qatar Airways marked another global first with the touchdown of the world’s first commercial passenger A350-1000 at its home and hub, Doha, where it will shortly commence commercial operations.

After performing a celebratory fly-by over Doha’s corniche, the arrival of the aircraft from the Airbus production facility in Toulouse, France, was greeted by a celebratory water cannon salute. On board the flight were select VIPs, including Qatar Airways Group Chief Executive, His Excellency Mr. Akbar Al Baker; Airbus Vice President Sales Commercial Aircraft, Mr. David Dufrenois; and Rolls Royce Senior Vice President Middle East, Mr. John Kelly, as well as members of the international media.

The National Carrier of the State of Qatar is the global launch customer for the A350-1000, the world’s most advanced passenger aircraft, fitted with the airline’s revolutionary Qsuite Business Class seat. The carrier also announced it will take delivery of an additional A350-900 today.

Qatar’s Minister of Finance and Chairman of Qatar Airways Group, His Excellency Mr. Ali Shareef Al Emadi, said: “As a nation, we are tremendously proud to accept this aircraft as part of Qatar Airways’ fleet by bringing it to Doha. It is testament to our continued commitment to the expansion of our national carrier, and to operating the most modern and technologically advanced aircraft available in the skies. We look forward to welcoming passengers from around the world on board our spectacular new A350-1000.”

Qatar Airways Group Chief Executive, His Excellency Mr. Akbar Al Baker, said: “We are truly thrilled to welcome to Doha the newest and most technologically advanced commercial aircraft in the world, the very first Airbus A350-1000. I am delighted to have this state-of-the-art aircraft join our fleet, which will offer our passengers the most modern and spacious cabins in the sky, fitted with our award-winning Qsuite Business Class seat, where they will experience our unrivalled five-star service.

“As a Qatari, this is a moment of great pride for me, and for the country as a whole. Despite the illegal blockade against the State of Qatar, we have continued to thrive and grow. This ultra-modern aircraft will enable us to continue on that journey and bring people together from all parts of the world, allowing them to experience our renowned, world-class service.”

The new A350-1000 will go into full commercial service on the airline’s Doha-London route, on which the A350-900, the A380, Boeing 777 and 787 Dreamliner already operate, offering six flights a day between Qatar and the United Kingdom’s capital.

VIPS were entertained with a glittering cultural evening in Toulouse the night before the aircraft’s arrival in Doha, in celebration of the delivery of the new aircraft.

Following the delivery ceremony, VIPs and the media were offered a tour of the new aircraft.

The arrival of the A350-1000 is a sign of the airline’s continued commitment to rolling out Qsuite across its fleet. The first aircraft fully-fitted with Qsuite was launched on the Doha-London route last summer on the B777, and was soon followed by service to Paris and New York, with service to Washington, D.C. launched most recently last month. Qsuite features the industry’s first fully lie-flat double bed, a revolutionary quad design offering passengers a private and fully adaptable space – the first and only of its kind - in addition to movable TV monitors and privacy dividers, which transform the space into an area perfect for socialising.

Qatar Airways is known for its commitment to global firsts; in addition to being the global launch customer for the A350-1000, the airline was also the global launch customer for the A350-900 in 2014. The airline also recently took delivery of its fourth state-of-the-art Gulfstream G650ER executive aircraft, the fastest ultra-long-range business jet in the world, making Qatar Airways the world’s largest owner-operator of Gulfstream G650ERs.

Qatar Airways has already added many new exciting destinations to its network in 2018, including Pattaya, Thailand; Penang, Malaysia and Canberra, Australia, with direct service to Cardiff, United Kingdom; Mykonos, Greece; and Malaga, Spain, set to launch this year.

As well as being voted Skytrax ‘Airline of the Year’ by travellers from around the world, Qatar’s national flag carrier also won a raft of other major awards at last year’s ceremony, including ‘Best Airline in the Middle East,’ ‘World’s Best Business Class’ and ‘World’s Best First Class Airline Lounge.’

Qatar Airways operates a modern fleet of more than 200 aircraft to a network of more than 150 key business and leisure destinations across Europe, the Middle East, Africa, Asia Pacific, North America and South America.