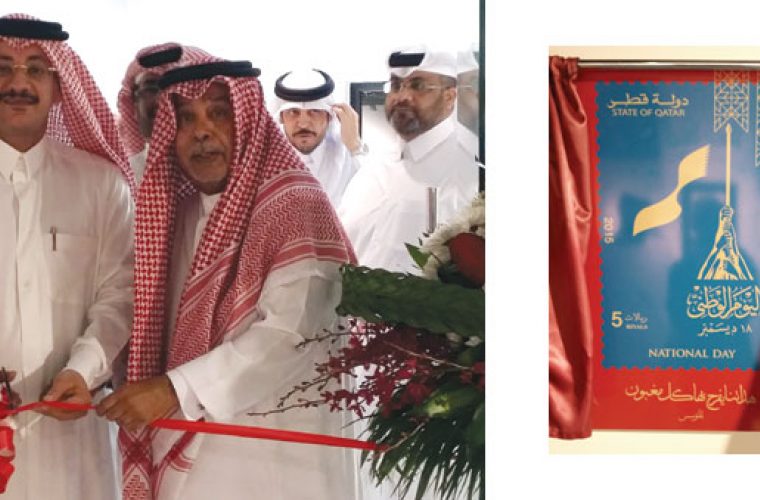 The Qatar Postal Services Company (Q-Post) unveiled a commemorative stamp to mark the Qatar National Day celebrations in a function at Katara- the Cultural Village yesterday.
“The idea is to document this very special occasion for the future generations and it is also a good opportunity to showcase our pride on National Day through the postal network,” Q-Post chairman Faleh Mohamed al-Naemi said on the occasion.
The official led the ceremonial ribbon-cutting, in the presence of former chairman Ali Mohamed al-Ali, at an exhibition that features some of the oldest and unique stamps used after World War II, when oil was discovered in Qatar.
Al-Naemi noted that they made the design “very simple” and highlighted the logo (hands holding the Qatar flag) with a statement from Sheikh Jassim bin Mohamed bin Thani, the leader and founder of Qatar.
Out of the total 40,000 stamps printed by Q-Post, some 2,000 pieces will be sold from tomorrow (first day cover quantity). Designed by artist Abdellatif Zaian, the stamp’s first day cover value is QR6 and the stamp itself costs QR5.
Al-Naemi stressed the importance of stamps, saying they cover different geographical areas and give the country a lot of exposure.
“It will be noticed by many people - from the post office to the airports, customs, other postal offices and until it reaches its final destination,” he added.
The Q-Post official wants to come up with National Day commemorative stamps regularly but the frequency is still under discussion. A committee is considering a number of options, either yearly or every five years.
Q-Post also launched four National Day commemorative stamps in 2008, which featured the different facades of Souq Waqif as the main background.
The stamps, designed from actual paintings by Iraqi artist Bilal al-Douri, also featured the traditional Qatari life and highlighted the historical significance of Souq Waqif.
A total of 84,000 pieces were printed at that time and some 2,000 were available on sale on the launch date.
Al-Naemi said stamps have remained a hobby for many people in different countries around the world. “It is value for money, it is a way you settle your dues for letters and other things, and an image of an ambassador,” he added.
The exhibition at Katara also displayed a number of old letters from Qatar sent to Trinidad via Bahrain in the 1940s during the Indian early postal period.
Qatar’s first postal office was established in 1950 to serve the increasing number of letters sent by the oil industry workers to their families.