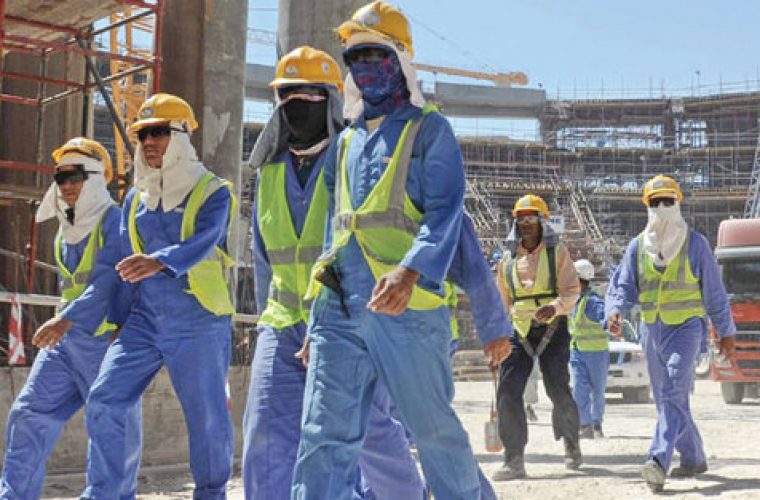 Qatar’s Ministry of Labour will establish electronic links with its counterparts in labour-exporting countries in order to prevent any manipulation of employment contracts offered to construction workers, the government has informed Amnesty International. The official communication was sent to the global rights watchdog as part of disseminating Qatar’s efforts to redress any abuse of foreign workers in the country. A letter sent to Amnesty on behalf of the Ministry of Foreign Affairs has been included in the recently-released report on Qatar titled “The Sponsorship System: A Recipe For Exploitation And Forced Labour”. The letter dated October 7, 2013 is signed by Human Rights Department director Sheikh Khalid bin Jassim al-Thani . It assured Amnesty that the Qatar government had “keen interest” in the organisation’s comments and “welcomed the continuation of co-operation and dialogue” between them in order to guarantee and respect human rights in Qatar. On the charge of misleading construction workers and changing their contracts, the letter said that the Ministry of Labour in Qatar was in the process of implementing a programme for establishing an electronic connection with labour-exporting countries. “Co-operation between the ministries of labour will be in the form of establishing an electronic information base for those seeking jobs in Qatar. The website will allow employers in Qatar to choose their workforce from the available applications,” it said. The project would ensure that there was no longer any discrepancy between the job the worker had signed up for in his country and the contract signed in Qatar, as all documents listed on the information base, including the work offer by the employer, would be registered, sources said. “In case of any disagreement between the two sides, the system will ensure that the information can be checked and verified.” On the issue of exit permits, the government, through the letter, told Amnesty International that according to Qatari law, foreign employees needed to obtain permission from their employers to travel abroad and those exempted from obtaining permission were females who were residing in the country on the head of the family’s sponsorship as well as children and visitors who spent fewer than 30 days. The government said it was keen to protect the interests of workers and there were legal provisions that enabled the employee to leave the country, without the permission of the sponsor, in special cases. “Yet the law did not forget about protecting employees from some bad examples of sponsors, thus the employee can travel without permission if the objection of the sponsor was unreasonable, when the sponsor is absent or upon his death,” the letter pointed out. Meanwhile, HE the Attorney General Ali bin Fetais Marri, commenting on reports published by London’s Guardian newspaper on the condition of workers in Qatar, questioned why some of the quoted in its series were from countries which competed with Qatar to host World Cup 2022. Al-Marri, who is also the chairman of the Board of Trustees of the Rule of Law and Anti-Corruption Centre, was quoted by the official Qatar News Agency (QNA) as saying that the issue had been referred to judicial authorities to conduct their investigations. http://www.gulf-times.com/qatar/178/details/372223/new-system-%E2%80%98to--prevent-contract--manipulation%E2%80%99