New cargo terminal by 2018; capacity to go up by 3mn tonnes 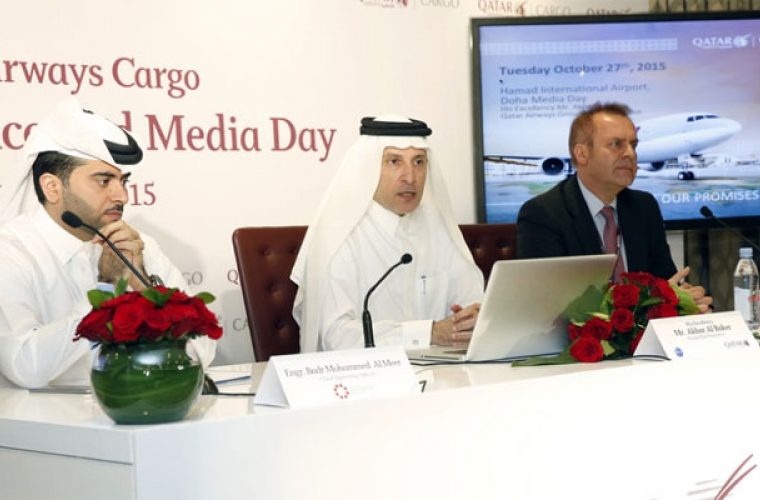 Qatar has announced plans to set up a “second, even larger” cargo terminal at Doha’s Hamad International Airport, which Qatar Airways Group chief executive Akbar al-Baker said will significantly enhance the national carrier’s cargo handling capability.
The new cargo terminal, which is scheduled to open in 2018, combined with the current facility, will allow Qatar Airways Cargo to handle 4.4mn tonnes of cargo a year, an increase from today’s 1.4mn tonne capacity, al-Baker said at a media event at the Hamad International Airport on Tuesday.
“Being in the top three international cargo carriers in the world reflects the hard work and commitment of the Qatar Airways Cargo team over the past five years,” al-Baker said.
“Our cargo capability is a major component in driving our group success and growth, and it will remain a focus of our expansion in the coming years.”
According to the latest IATA international FTK figures, Qatar Airways Cargo is now “the third largest international cargo airline” in the world.
This is phenomenal growth for the rapidly expanding company, which has risen to the number three position from 16th place in just five years, and now boasts a freighter fleet of six Airbus 330s, eight Boeing 777s and one Boeing 747.
Al-Baker indicated that future plans included building further capacity for cargo at Hamad International Airport, to up to 7mn tonnes, after current expansion plans were complete.
Further announcements made yesterday included plans to launch two new speciality products- ‘QR Equine’ and ‘QR Express’.
QR Equine offers a five-star service and world-class facility for the transportation of horses managed by a dedicated team of experts. With Qatar Airways Cargo’s modern fleet of Airbus and Boeing freighters with controlled temperature zones, a network of more than 150 destinations, comfortable and spacious horse stalls, and dedicated grooms that accompany the horses, the airline guarantees the care, comfort, safety and reliability for the smooth transportation of every equine guest.
On the ground at its state-of-art hub in Doha, Qatar Airways Cargo’s ‘Live animal’ facility offers an equally sophisticated environment with air conditioned holding stalls, a paddock and on-site veterinary personnel.
QR Express provides clients with the opportunity to book through a simplified system with high boarding priority and rapid handling, guaranteeing the speedy delivery of their cargo. Other key features include short and flexible close outs, quick and dedicated ramp transfer (for transit express), as well as priority loading at origin and unloading at final destination and speedy retrieval at final destination (approximately 90mins).
Qatar Airways chief officer (Cargo) Ulrich Ogiermann said, “The new cargo terminal, which is scheduled to open in 2018, underlines our commitment to continued growth and expansion in line with the airline’s group objectives for the future.
“Having the ability to handle 4.4mn tonnes of cargo a year will put Qatar Airways Cargo into another league, and enhance the efficiency and service already offered at our existing state-of-the-art facility,” he added.
Qatar Airways Cargo commenced operations in 1997 and has since experienced phenomenal growth in both its fleet size and network.
“This expansion shows no signs of slowing down with delivery of five new freighters scheduled for the next year and significant network enhancement to destinations such as Durban, Boston, Adelaide and Sydney in the coming months,” Qatar Airways said in a release.