Nehmeh: First Qatari company in history to get Eurovent Certification 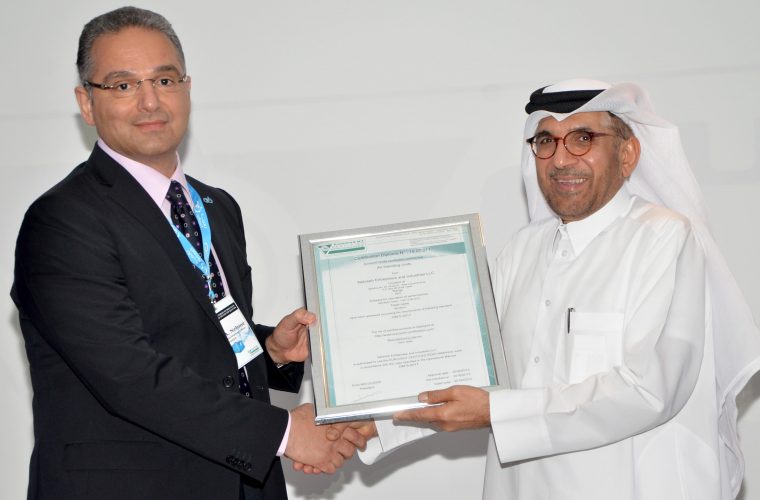 Established in 1955, Qatar-based leading Industrial Solutions provider ‘Nehmeh’ is recognized for many industry firsts, locally, regionally and internationally. As well as being the first & only Air Handling Units (AHUs) manufacturer in Qatar, it further added another milestone as its units were officially crowned with the coveted Eurovent Certification putting the Qatari manufacturer in par with world-leading brands in the manufacturing, sale & service of AHUs world-wide.

The Eurovent Certificate Performance mark was presented to Nehmeh at a glittering Press Conference in Doha on 29th September, 2018. Among the attendees included senior government representatives from various ministries, media and leading HVAC body heads. The announcement was made by Mr. Eric Foucherot, International Affairs Sr. Manager, Eurovent who presented the official certificate to Mr. Simon A. Nehme, Chief Business Development Officer, Nehmeh.

Speaking at the Press Conference Mr. Simon A. Nehme briefed the media on current state of ventilation technologies in Qatar and Nehmeh’s contribution along with being Qatar’s only manufacturer and only certified brand of Air Handling Units. “It is crucial and uttermost importance of valued based HVAC technology to be brought to Qatar. Nehmeh is at the forefront on this with our Eurovent Certified Air Handling Unit’s among others in our portfolio of Ventilation Solutions” said Mr. Simon A. Nehme.

An AHU is a component of central air conditioners that handles the air that usually will be supplied into the buildings through ceiling vents which is connected by ductwork which is in turn connected to the AHU. Air quality is treated through filtering elements, cooling and/or heating, humidifying and/or dehumidifying. Nehmeh AHUs’ NRS series which range from 600 CFM to 72,000 CFM with various applications including Standard CFM, Low CFM Application and 100% Fresh Air as well as Heat Recovery System and a Hygienic System. With the ability to custom-build designs in a variety of combinations to suit developers, consultants and contractors’ requirements, a software has been developed by Nehmeh entitled NehCalc AHU software able to calculate and design indoor air quality, space cooling, energy saving proposal, following Eurovent new energy regulations.

Further elaborating Mr. Nehme stressed on the importance of Eurovent coming to Qatar and Nehmeh’s membership to Eurovent is a very big step forward for the general HVAC Industry in Qatar. “We are honored and privileged to be the first Qatari company in history to achieve this international certification. We are proud to wave Qatar’s flag ever higher and stand as equals to world-class leading manufacturers.” said Mr. Simon A. Nehme. “The ‘Made in Qatar’ Air Handling Units manufactured by Nehmeh now has the highest quality and certified to abiding to world-class standards.” he added.

France-based Eurovent Certification Performance guarantees that Air Handling Units manufactured by Nehmeh are certified products for the construction of HVAC systems. Eurovent has been made mandatory in Europe and has becoming the operational standard around the world for capacity-performance certification. As detailed comparisons and qualified testing is no longer required for certified manufacturers, it makes its selection by consultants, engineers and users preferred as a mark of trust and that the catalogue data is correct. The importance and reliability of the European Air Conditioning Industry are clearly demonstrated by the existence of voluntary certification schemes established and administrated by Eurovent Certification Company. “

The Eurovent Certification has added to Nehmeh’s existing portfolio of world and industry standards certifications such ISO 9001:2015, ISO 14001:2015 and OHSAS 18001:2007 amongst others. The high standards followed by Nehmeh is a testimony to its professional work methodology which it applies across it various lines of businesses.