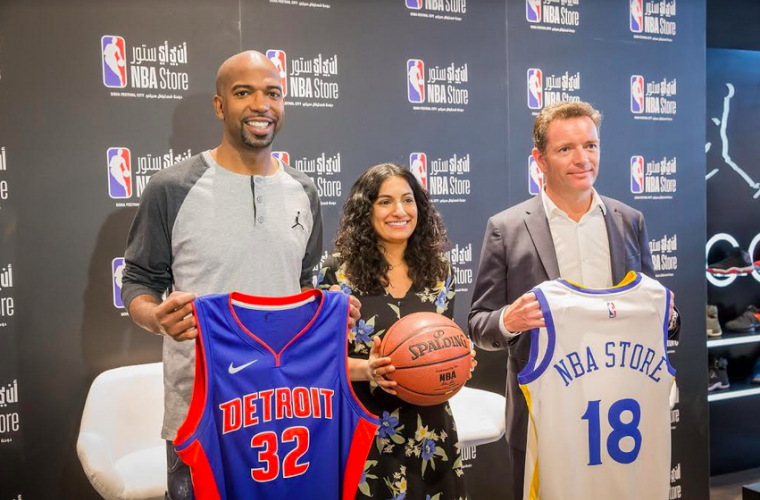 “The NBA Store is an exciting new concept to our portfolio.” said Foley. “With the support of the NBA, we have managed to bring this concept to Qatar. The store has great merchandise and delivers the real NBA experience, which will inspire the Qatari basketball consumer.”

“Our first NBA Store in the region will meet the growing demand that Qatari fans have for authentic NBA products,” said Balachandar. “We are excited to partner with Al Mana Fashion Group to bring the latest NBA merchandise to fans in the region to help them celebrate their passion for the NBA.”

Fans can purchase a Nike NBA Connected Jersey, the first NBA jersey that gives the wearer an all-access pass into the world of their favorite team and players. Fans can also personalize jerseys exclusively at the NBA Store in Doha. The store also offers youth apparel, a range of autographed memorabilia, and an interactive zone where fans can hone their NBA 2K skills.

The flagship NBA Store in Doha, which builds on the league’s network of more than 300 NBA-branded retail locations globally, features products from brands including Nike, Mitchell & Ness, New Era, Spalding, Stance, Under Armour, Jordan Brand, adidas and Bleacher Creatures. The store is open Sunday to Wednesday from 10am to 10pm and Thursday to Saturday from 10am to midnight.

NBA fans in the Middle East can sign up to receive the latest offers and updates from the NBA Store in Qatar at nbastore-me.com.

Title image courtesy by The NBA