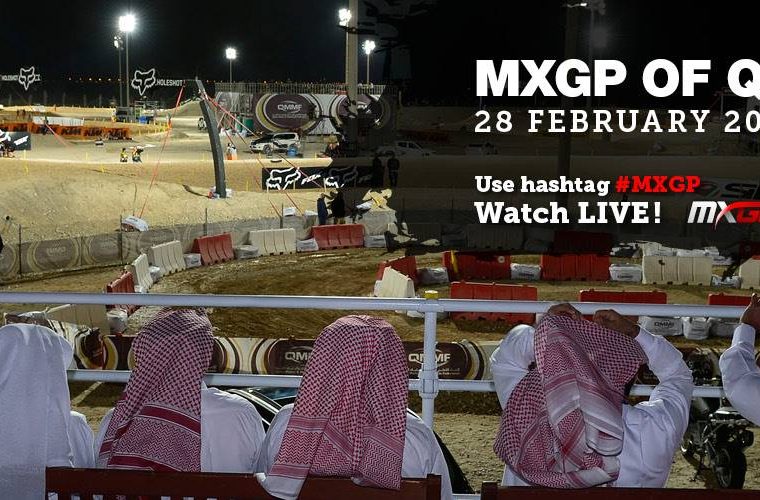 Silly season, off-season, pre-season, whatever you want to call it, those days are over. This weekend, Friday 27th and Saturday 28th, the gates of the FIM Motocross World Championship will smash to the ground as the onset to what is expected to be the greatest ever season of motocross, MXGP 2015.

Qatar always provides something special, which is why MXGP has returned here to open the championship for the third consecutive year. At first glance the track looks more or less the same, the only difference is some new soil has been added and a few alterations have been made to some of the corners. Learning from previous years, some of the lights have also been shifted to provide optimal vision for the riders who will be racing their one and only night event this season.

Also adding to the insane buzz surrounding the event here in Losail, the 2015 FIM Women’s Motocross World Championship will also kick off.

MXGP this year has without a doubt the deepest field of talent we have ever seen. So where do we start? Let’s start at the top with the man to beat, the eight-time FIM Motocross World Champion, Red Bull KTM Factory Racing’s Antonio Cairoli. Tony, as he is known to his fans, is a smart rider, he knows championships are not won at the first round and is sure to ride calm and collective.

Monster Energy Kawasaki Racing Team’s Ryan Villopoto on the other hand could be a different story. Judging from his recent videos on social media and via other media sources, the guy looks to be on the gas! It is said that Villopoto won’t settle for anything less than a win, which we’re sure he is capable of but what we’re also sure of is that it won’t be easy.

One rider that could make life difficult for the reigning champions is last years round one winner, Gautier Paulin. The last time we saw Paulin let it rip was at the Monster Energy FIM Motocross of Nations in Latvia where he was on fire and cleaned up the field. Now he has switched from Kawasaki to Honda’s factory squad, Team HRC, and is looking to keep that momentum going.

Meanwhile the vice world champion, Yamaha Factory Racing’s Jeremy Van Horebeek won’t be overlooked this year. With twelve podiums last year, from a possible seventeen, eleven of which were consecutive, a trophy from MXGP of Qatar is one of five that doesn’t sit on his shelf. That could be a little added motivation for the twenty-four year old Belgian.

Another Belgian to watch out for is Rockstar Energy Suzuki World MXGP’s Kevin Strijbos who qualified on pole here last year. Strijbos has upped his intensity over the winter and is looking stronger than ever, while his fellow teammate and countryman Clement Desalle is also capable of throwing red plates straight on his bike just as he did at MXGP of Qatar back in 2013.

Starting with the dude rocking the big bad number 1 plate, the FIM MX2 World Champion Jordi Tixier has got the target on his back this season and is already looking at home on his Monster Energy Kawasaki. Meanwhile, how Red Bull KTM Factory Racing’s Jeffrey Herlings will perform is probably the hottest topic since he has only been on the bike a few weeks since recovering from the complications of his broken femur.

Monster Energy Kawasaki’s other young gun Dylan Ferrandis is another rider we can expect to see footing it at the pointy end of the field along with the likes of Wilvo Nestaan Husqvarna Factory Racing’s Aleksandr Tonkov and Honda Gariboldi’s Tim Gajser. Standing Construct Yamaha’s Valentin Guillod could also raise some eyebrows as could his teammate Julien Lieber.

What about Monster Energy DRT Kawasaki’s Max Anstie? His performance here last year was unforgettable. If he rides like that again this year, he could smoke everyone, although judging from the pre-season events Red Bull KTM Factory Racing’s Pauls Jonass could be the cat among the pigeons.

The FIM Women’s Motocross World Championship is going to be epic this year. The three-time FIM WMX World Champion Kiara Fontanesi is not going to hand the gold plate over without a fight, while most eyes will be on the vice world champion Monster Energy Kawasaki Bud Racing’s Meghan Rutledge who absolutely dominated here in Qatar last year.

Team One One Four’s Livia Lancelot will also be a force this year as will the young Dutch sensation Nancy Van De Ven and MVR-D Honda’s Natalie Kane.