Joint annoucement by ROTA, FCB & UNICEF on the launch of the 1in11 campaign 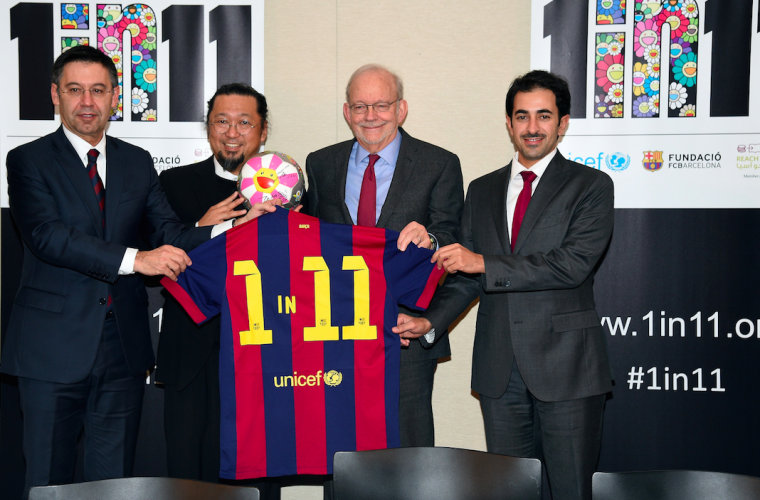 FC Barcelona Foundation, Reach Out To Asia (ROTA) and UNICEF today launched the ‘1 in 11’ campaign to extend educational opportunities to marginalized children in Bangladesh, Indonesia and Nepal, with the goal of expanding to more countries.

Globally, one in 11 primary school-age children – or 58 million out of 650 million children – are out of school. The majority are among the most disadvantaged and vulnerable: children living in areas affected by conflict; children in extreme poverty; children with disabilities; children from indigenous communities. In addition, in many schools, sports programming does not exist, even though studies have shown that including sports in school curricula can inspire children to attend and stay in school, lead to better physical health, and help to improve their grades.

Lending their voices, and their athletic ability, to ‘1 in 11’, Messi and international tennis champion and UNICEF Goodwill Ambassador Serena Williams launched the #1 in 11 campaign film and ‘Keep Ups’ challenge – challenging people to keep a ball up in the air for at least eleven touches.

A special global premiere screening of the campaign film, featuring both Messi and Williams attempting their own ‘Keep Ups’ challenge, will take place at half time on the big screens at Camp Nou stadium during the FC Barcelona vs Atletico Madrid match on Sunday 11th January.

The funds raised by ‘1 in 11’ will focus initially on education programmes in three countries. In Indonesia, the campaign will support schools in six districts to include children with disabilities. In Nepal, UNICEF has worked with the government to identify 10 priority districts that will offer sports programming for children up to secondary school, particularly aimed at breaking down the societal barriers for children with disabilities and including them in school. In Bangladesh, the campaign’s focus will be on reaching out-of-school children.

Through the ‘Keep Ups’ challenge, Messi and Williams are inviting their fans and followers to join, donate to the campaign and share their own ‘Keep Ups’ via social media and at www.1in11.org.

“I’m supporting the 1 in 11 campaign because I believe every child has the right to fulfil their potential and realise their dreams. Education is fundamental to this, but millions of children across the world are out of school and not getting the start in life they are entitled to.

“I believe that through sport we can teach values of respect, teamwork and effort, and ultimately inspire children to attend and stay on in school, so they will receive the quality education which will equip them with the skills they need for life.”

“In many countries we take it for granted that every child has the right to receive a quality education, but ‘1 in 11’ children around the world do not enjoy that right – and without it, may never reach their full potential,” said Williams. “We need to kick start global progress and get that number down to zero, so every child has the chance to learn.”

“I’m delighted to be able to support the ‘1 in 11’ campaign through donating my artwork to the auction and designing the global campaign logo. I know the money raised by the campaign is going to help some of the most marginalised and vulnerable children across the world.

“’1 in 11’ will inspire the world that integrating sport and play into education can be the catalyst to unlock a child’s potential”.

“Every child has the right to learn, to play, and to grow – and the ‘1 in 11’ campaign will help more children do so. We are delighted to work together with FC Barcelona and ROTA to get more children into the classroom and improve the quality of learning they receive there.”

“It is a great honour for the FC Barcelona Foundation to be a part of the ‘1 in 11’ campaign together with UNICEF and ROTA. As it is well known, Barça is “more than a club” and this means we have a social responsibility that goes beyond sport. This social force is essential to understand what we are and what we represent. This partnership is a new step forward for our Foundation in the common goal of reducing the number of children that do not have access to basic education. Furthermore, sport will play an essential role in this work, a fact that makes us proud, as sport and education have always been part of our club’s identity.”

“ROTA is extremely honoured to take part in the ‘1 in 11’ campaign with UNICEF and FC Barcelona Foundation. This campaign will further ROTA’s vision of a world in which all young people have access to the education and training they need in order to realise their full potential and shape the development of their communities. ROTA is well recognised across Asia for providing technical support and funding for education in the most marginalised communities, particularly aimed at getting children back to school in a post crisis context. We help to rebuild schools and strengthen teacher training, and we promote the use of sports as an enabler to achieving education access and quality as we have a strong belief in the power of sports. Our programmes are always delivered in partnership with affected communities and likeminded organisations who share similar goals and have a common commitment. Through ‘1 in 11’, we will be able to work with our partners towards achieving the highest level of impact in the lives of out of school children.”

Visit 1in11.org to support the campaign, see the Messi and Williams campaign film and take part in the #1in11 Keep Ups challenge.