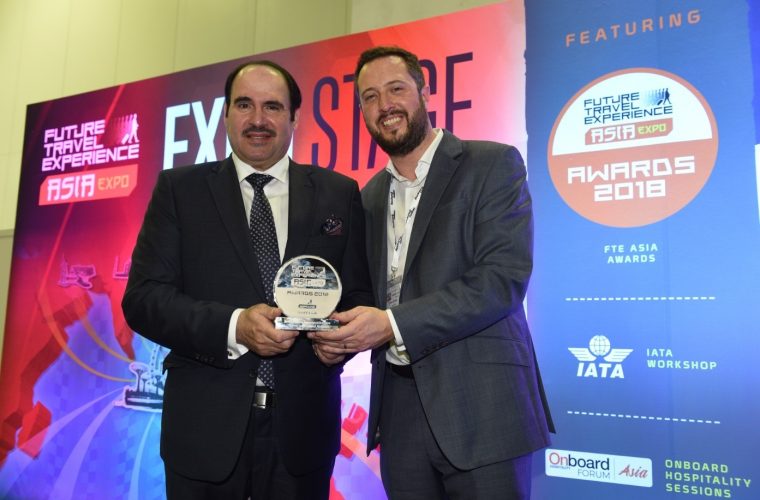 Hamad International Airport (HIA) won the ‘Best Customer Experience’ Initiative Award at the Future Travel Experience (FTE) Asia Awards 2018 which took place in Singapore, awarding the leading hub for transforming its terminal and bringing the FIFA™ World Cup experience to its travelers. The award distinguishes the most customer-centric ‘on the ground’ initiatives over the last 12 months, and marks HIA’s fourth consecutive win at FTE Asia Awards.

Judged by an expert panel and criteria that evaluated the airport for initiatives that had an overwhelmingly positive impact on its customers, HIA was recognized for its success in merging its state-of-the-art facilities, hospitable culture, and love for football by delivering a month-long FIFA™ World Cup celebration during 2018 FIFA World Cup Russia™ in partnership with The Supreme Committee for Delivery & Legacy (SC), the organization responsible for delivering tournament infrastructure for the 2022 FIFA World Cup.

Commenting on the award, Engr. Badr Mohammed Al Meer, Chief Operating Officer of Hamad International Airport, stated: “We are honored to be recognised for our outstanding customer experience at this year’s FTE Asia Awards. At HIA, we strive to deliver truly unique and authentic experiences that leave a lasting impression on every traveler that visits our state-of-the-art terminal.”

FTE Founder Daniel Coleman stated: “Everyone at Future Travel Experience would like to congratulate Hamad International Airport on their success in the 2018 FTE Asia Awards. The FIFA World Cup Fan Zone is a great example of an airport embracing creativity to provide passengers with a unique and memorable experience.”

The award-winning airport, in addition to launching an Airport Football Fan Zone, broadcasted live matches in three themed viewing areas and transformed the iconic yellow Lamp Bear area of HIA into a football pitch to host games and activities for passengers. The airport Fan Zone welcomed as many as 2,600 active participants on a single day, with a total of 50,000 active participants from around the world who enjoyed month-long World Cup festivities at Qatar’s world-class airport. As part of the festivities, a ‘digital portal’ was installed in the terminal to provide football fans at Hamad International Airport the unique chance to interact directly with fellow football fans all the way in Russia through with interactive live streams of different Russian landmarks during the 2018 FIFA World Cup™, including Kamergersky Lane, Revolutionary Square, Tsvetnoy Boulevard in Moscow, Bolshaya Morskaya street and Dvortsovaya Square in St. Petersburg.

HIA was previously awarded the ‘Best Airport in West Asia’ at the Future Travel Experience (FTE) Asia Awards 2017 in Singapore for the third time in a row. The award celebrates airports that have displayed customer experience and innovative leadership. FTE was established in 2006 and is an independent events and online media business dedicated to improving the end-to-end passenger experience.

HIA’s continued efforts are bearing fruit as demonstrated by its awards and accolades at the Skytrax World Airport Awards 2018. HIA ranked the fifth ‘Best Airport in the World’, moving up one place from last year, and was also awarded the title of ‘Best Airport in the Middle East’ for the fourth year in a row. HIA is currently a candidate for the “Best Airport in the World” for Skytrax World Airport Awards 2019. Passengers who have experienced HIA’s five-star service can vote for the airport using voting links available on the airport’s social media profiles and its official website. (LINK: http://www.worldairportsurvey.com/Surveys/favorite_airport.html )