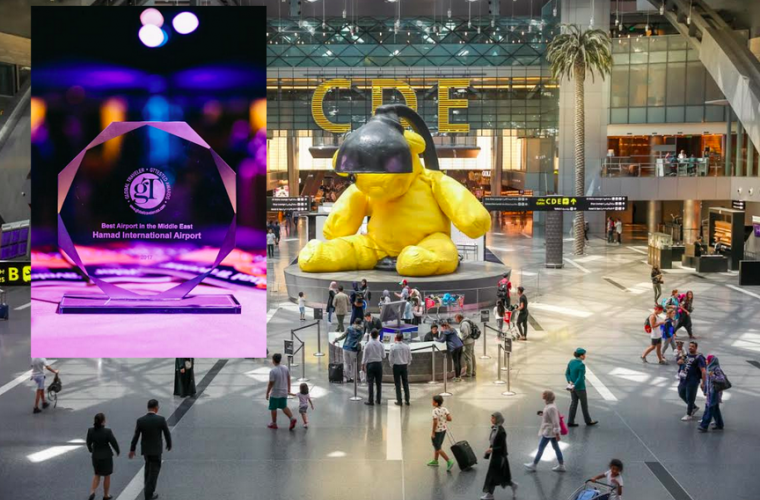 Hamad International Airport (HIA) has been voted as the “Best Airport in the Middle East” at the Global Traveler’s GT Tested Reader Survey Awards in Los Angeles. The award recognises outstanding performance and customer service displayed by airports across the world.

The 14th Annual GT Tested Reader Survey awards ceremony took place at The Peninsula, Beverly Hills on the 12th of December recognising HIA’s efforts in delivering the highest standard of service to its passengers. Winners were chosen through an open-ended reader survey voted by global travellers. The Annual GT Tested Global Survey awards are sought after, highly respected and an unbiased reflection of the best in travel, established to recognise companies for their outstanding performance on an annual basis.

Commenting on the award, Engr. Badr Mohammed Al Meer, Chief Operating Officer at HIA, stated: “We are honoured to receive the “Best Airport in the Middle East” award, which recognises our state-of-the-art facilities and 5 star services. As we work hard towards our target to welcome 50 million passengers, HIA will continue to invest in cutting-edge innovative solutions and in creating the most memorable travel experience for our passengers.”

Mr. Francis X. Gallagher, Publisher and CEO – Global Traveler said: "A big congratulations to Hamad International Airport for its first-ever win in our GT Tested Reader Survey awards. The 2017 Best Airport in the Middle East is also one of the best in the world, and travelers can rest assured a trip through DOH will be easy, efficient, first-rate and bursting with options and amenities for even the most discerning travelers. We're sure we'll see the airport on this elite list of winners again."

The bilateral relations between Qatar and the United States have strengthened over the years. In the aviation sector specifically, recent data shows that Qatar Airways has made a robust $91.8bn investment in the American economy through the purchase of its 332 American-made aircraft. The award-winning airline also directly supports 123,000 American jobs and flies 3.1 million visitors to the US annually, these visitors have helped pump an estimated $4bn into the US economy in 2016 alone.

Arts have also played a significant role in enhancing relations between the two countries. HIA, in collaboration with Qatar Museums, has been giving passengers the opportunity to engage with a selection of art pieces created by reputed American artists. Some of them include New York based artist Keith Haring, video artist Bill Viola and renowned art sculptor Tom Otterness’s iconic series of interactive bronze sculptures spread throughout the activity nodes in the award winning airport terminal. HIA and Qatar Museums are also in the process of installing a new art piece called ‘Small Lie’ by KAWS, the well-known pop artist from New Jersey.

HIA has taken the lead among other international airports in establishing itself as an international transfer hub through its innovative facilities, retail offering and excellent customer service. HIA has won the ‘Best Airport in the Middle East’ title for three years in a row and ‘Best Staff Service in the Middle East’ for two years in a row in the Skytrax World Airport Awards. It also recently won the ‘Best Airport in West Asia’ award for the third time in a row at the Future Travel Experience (FTE) Asia Awards 2017 in Singapore.

HIA is currently a candidate for the “Best Airport in the World” award by Skytrax which also classified it as a five-star airport in 2017, making it one among only five other airports in the world to achieve this prestigious status. Earlier this year, it was ranked Sixth Best Airport in the World by the 2017 Skytrax World Airport Awards, moving up four places from 2016.

Since 2004, Global Traveler is a well-known luxury publication in the United States, recognised globally with a high readership of frequent luxury business and leisure travelers informing passengers about five star airports, airlines and hotels. Global Traveler’s yearly surveys are well acknowledged in the industry and include the First- and Business-Class Survey and Leisure Lifestyle Awards amongst others.