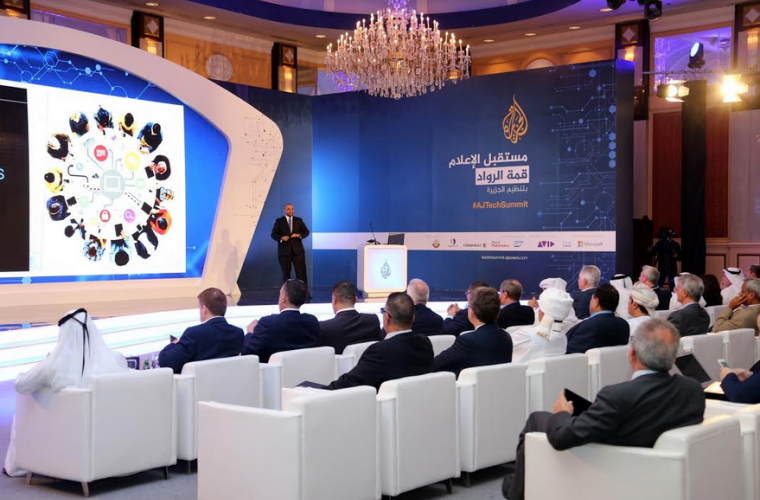 Held under the patronage of His Excellency Sheikh Hamad bin Thamer Al-Thani, Chairman of Al Jazeera Media Network, AJMN’s “Future of Media – Leaders’ Summit” kicked off today at the Ritz Carlton Hotel in Doha with international broadcast industry leaders, CIOs, ICT professionals and media experts discussing how business and innovation are affecting the future of media. The Summit is the first of its kind in the region, on the model of similar events held in the Netherlands and Las Vegas.

Keynote speaker Paul Lee, Partner and Global Head of Research for the technology, media, and telecommunications (TMT) industry at Deloitte, presented research about the ways digital and traditional media are complementing each other. “Digital transformation will never end, but it doesn’t need to be zero-sum disruption,” Lee said. “It doesn’t have to be them versus us; it can be them and us.”

Lee’s speech was followed by a panel discussion on how media organisations are adapting to digital transformation.

Al Jazeera’s Mohamed Abuagla, CIO/CTO of Al Jazeer Media Network, presented on how the organisation has constantly adapted to changing technology over its 20-year history. “Transformation has to be holistic, involving people, processes and technology,” he said. “To become more transformative, you need to become a service provider.”

The day’s other speakers included Rainer Kellerhals, Industry Lead for Media and Cable EMEA at Microsoft, who spoke on cloud and cognitive computing’s impact on newsrooms; Jeff Rosica, President and CMO of Avid Technologies, who discussed transforming and unifying workflows with a platform approach; and Delbert Parks, CIO of Sinclair Media Group, who closed the day with a case study about Sinclair’s digital reinvention of contribution and distribution.