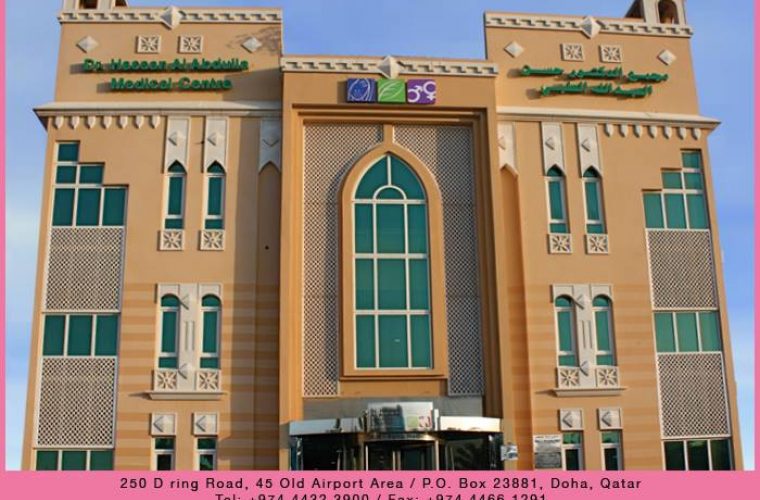 When living in Doha, it is not always an easy choice which doctor, clinic, hospital or health center to visit. Friends recommend doctors that they have gone to, and finding a new specialist yourself can get a little tricky. When you don’t have the time to look at several clinics and doctors and talk to them prior to the appointment you want to make, you cannot be absolutely be sure of what to expect in the new hospital.

In order to give you insight on a well-established medical center that you may not have heard of, we visited Dr. Hassan Al-Abdulla Medical Center and will let you in on everything to know about the clinic. 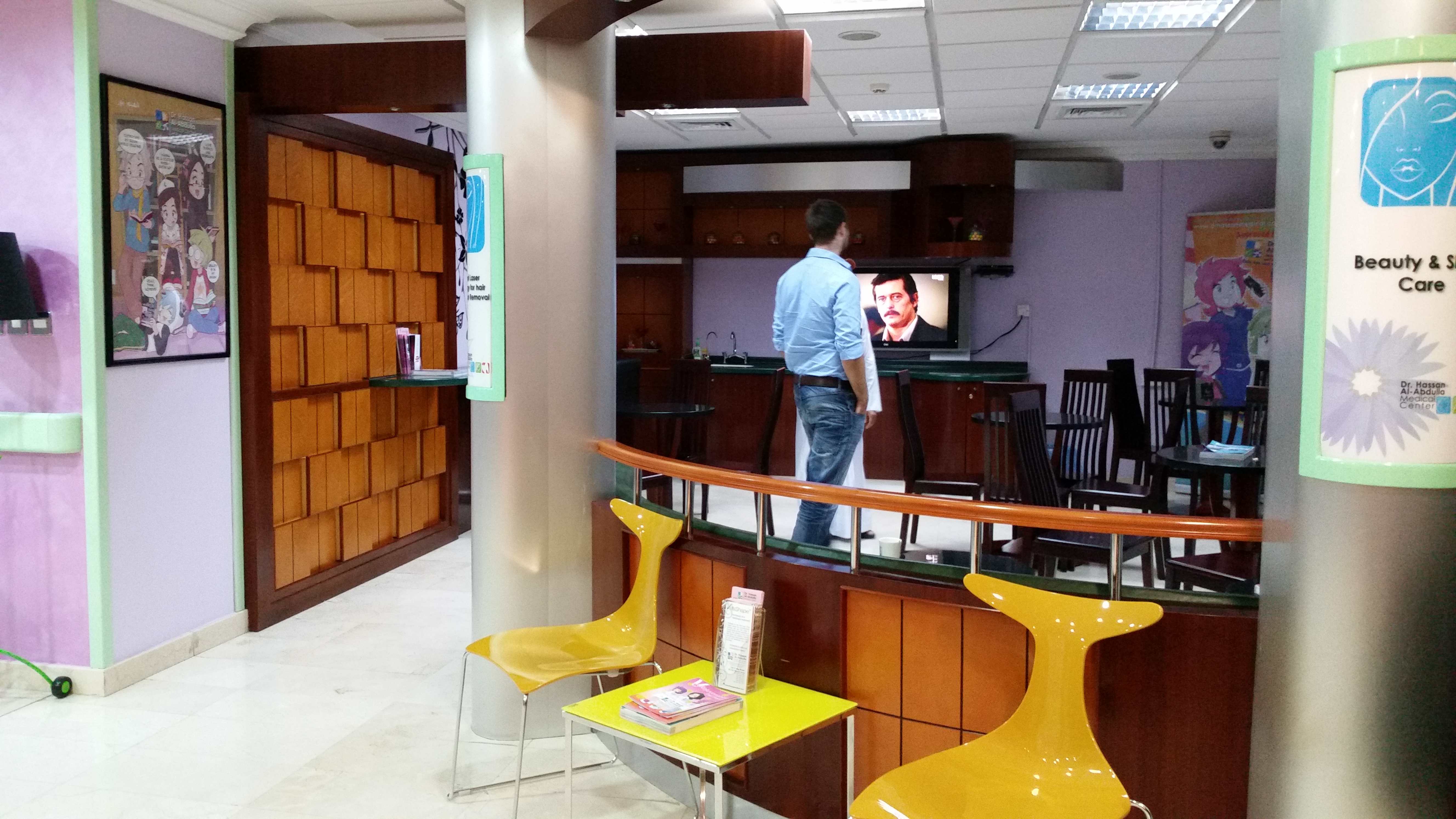 The medical center, which was established in 1977, was the first of its kind in Qatar and among the first in the GCC, with the Dr. Hassan Al-Abdulla Venereology and Dermatology Center as one of the leading Medical Centers in the GCC. But there are more firsts for the impressive clinic; it is the first and only anti aging center in Qatar, it was the first private medical institution for Qatari doctors, and it was the first center ever to practice hair removal in Qatar.

The founder of the medical Center, Dr. Hassan Ali Abdulrahman Al-Abdulla, who obtained his Medical education in Cairo, New York, Paris and Monaco, also played a key role in founding and opening Al-Ahli Hospital and has been Medical Director at Hamad Hospital for a long time, teaching and lecturing young medical students and doctors in Qatar. Faisal Al-Abdulla, son of Dr. Hassan Al Abdulla and CEO of the clinic, emphasized the importance of the clinic through his father, as he exceeds his role as a doctor and has taught many practicing doctors that may have their own clinics in Qatar.

Dr. Hassan Al-Abdulla Medical Center is a strong and well-dedicated family business with attention to detail and precision. 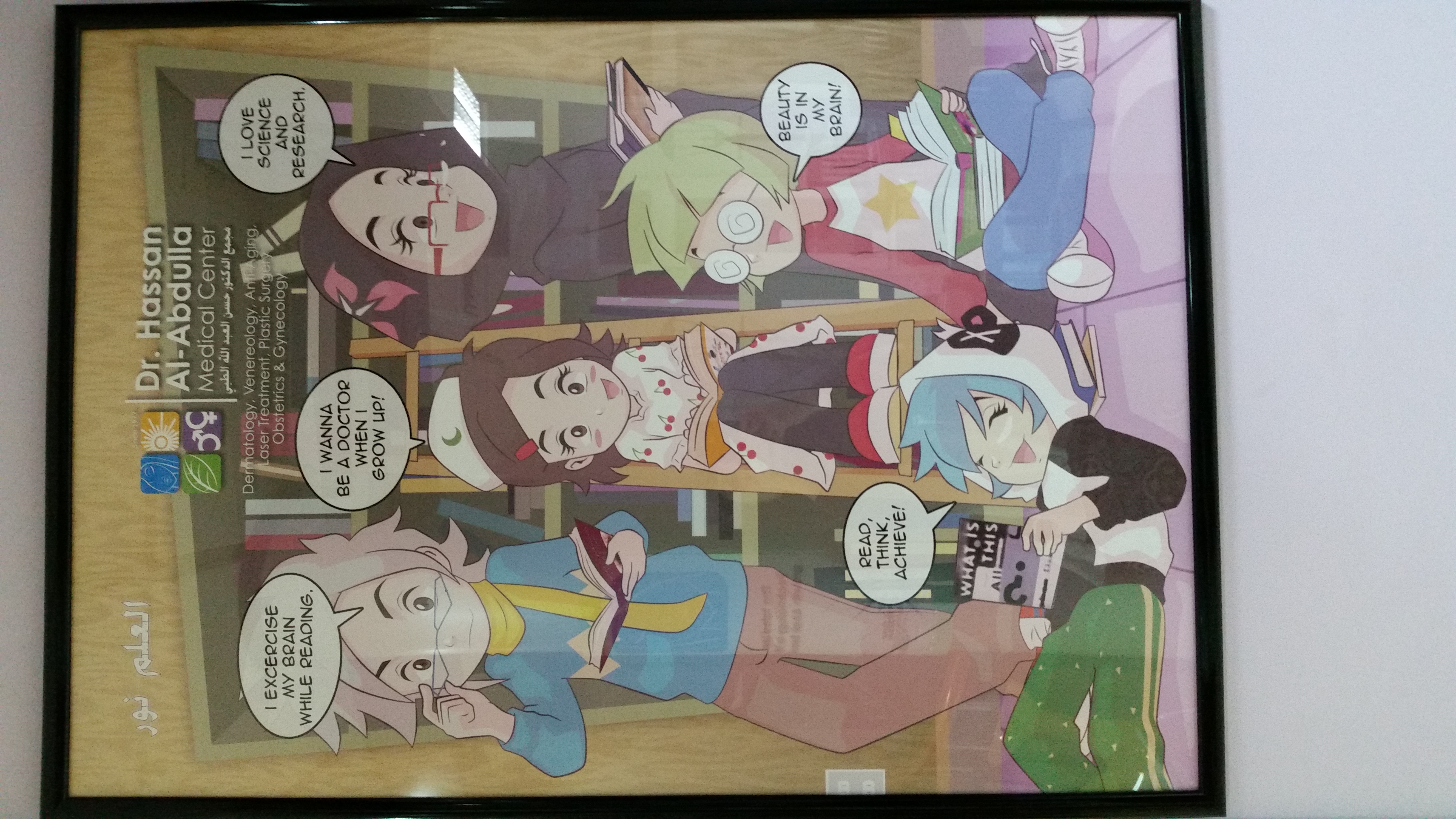 The very clean medical center itself sets you in a comforting mood the moment you step into the center. With its interiors, that Faisal Al-Abdulla designed himself, the place reminds you more of a home than of a sterile and unfriendly clinic. Paintings of anime characters, Japanese birds and flowers, and abstract contemporary works frame you within the warm and colorful walls of the waiting rooms, the hallway and even the patients’ rooms.

The medical center started with one doctor and two nurses and employs now around 100 persons making up the medical staff. Some of these find their homes behind the clinic in the accommodation for staff only. The medical center has great facilities and the newest technology that the doctors are equipped with and trained to use. These doctors include a dentist, a gynecologist, and 5-6 dermatologists. Another interesting fact is that the clinic has more female doctors than male doctors, which is presumably due to the patients being mostly women. 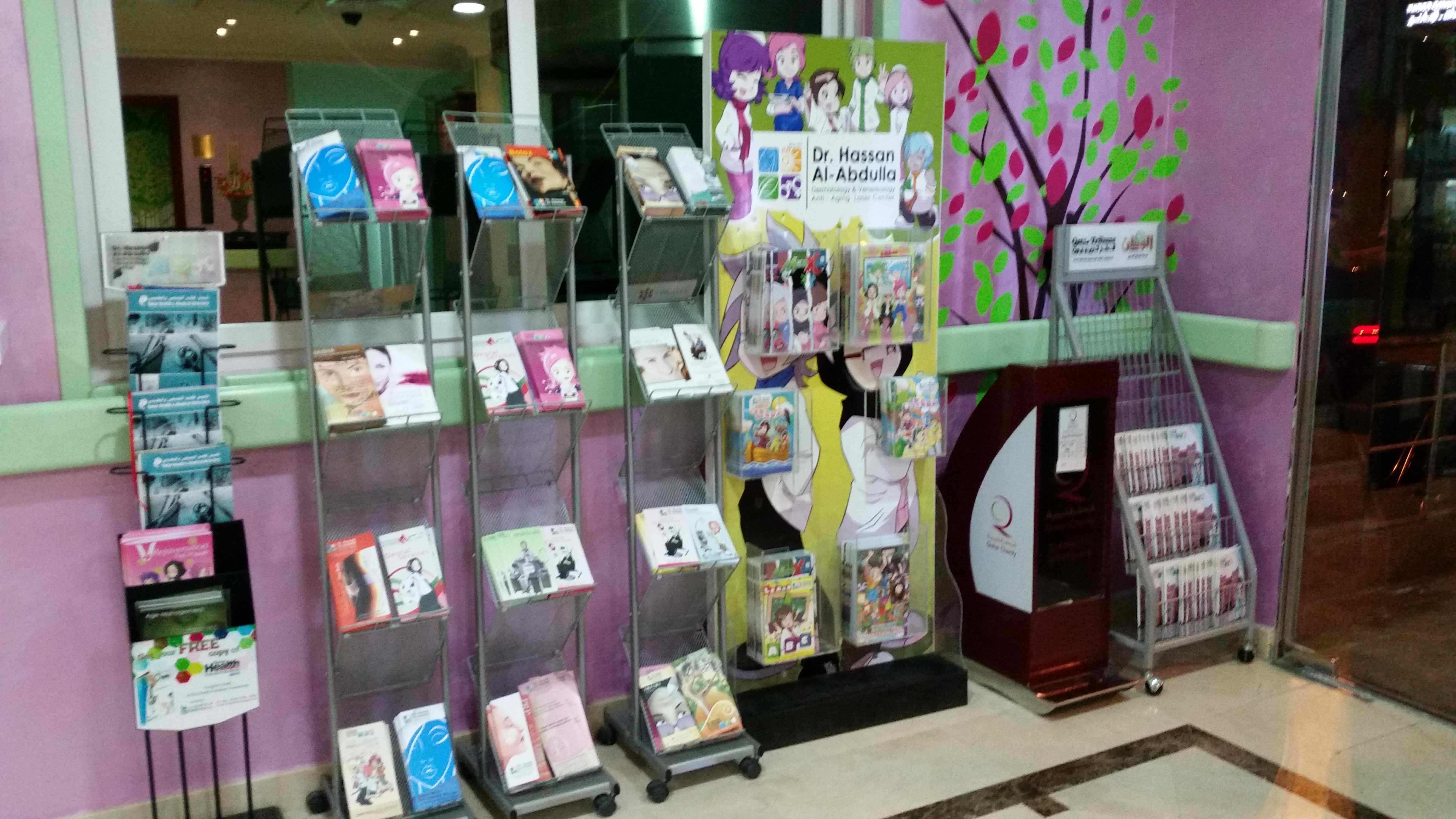 And this is where we come to the services the medical center actually provides. The Dr. Hassan Al-Abdulla Medical Center is primarily a venereology and dermatology center, treating reproductive illnesses and various skin diseases. But their services also include Anti Aging medicine, laser treatments, beauty treatments, obstetric and gynecology, and plastic surgery. Opposite to the medical center you can find their dental clinic, with the newest technology, great facilities and a dental lab, which carves out teeth for you or makes molds for protection, braces and teeth whitening.

Something the clinic is very proud of is their consultation; diagnosis of disease, disorder and illness is quick and efficient. Before the treatments, especially plastic surgery and larger beauty adjustments, the doctor will advise the patient on the different procedures and options, and will be honest if the treatment is not necessary. Some of their services offered are laser for skin care, body contouring and hair growth and removal, rejuvenation, Botox and Filler treatment, and different techniques for fat removal such as a freeze method. 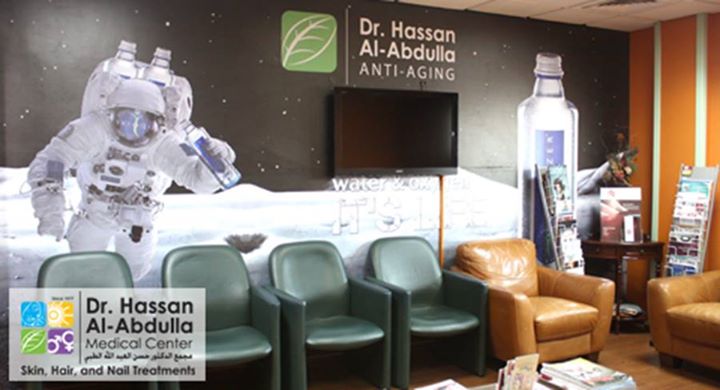 But what does the anime have to do with medicine and health care in the center? This innovative marketing strategy is something, Faisal Al-Abdulla, the CEO, came up with. Faisal Al-Abdulla employs designers to create anime character, that represent the doctors and nurses, as well as educational comics and brochures for the clients and patients. These characters serve many purposes; firstly to visually stimulate the patients, to reach people in an easy way in order to educate them, and to avoid using pictures displaying nudity in medical brochures for cultural appropriation. The happy anime characters suggest a change in how medical institutions may work, and that visiting the center is not fear related, but about feeling comforted, relaxed and having a good time. Faisal Al-Abdulla has his visions for the hospital and invests a lot of time into developing ways in which they can reach out to people and work on how people see the clinic. These characters and stories also appear in their social media, which is another way for them to reach out to people. While the heavy use of social media for medical institutions is rather unusual, Dr. Hassan Al-Abdulla Medical Center saw this as a chance to communicate with people on medical issues and create a platform that is significant to each one of us. This is a great advantage to the clinic, as in this day and age a lot of communication takes place on social media platforms such as facebook and twitter. 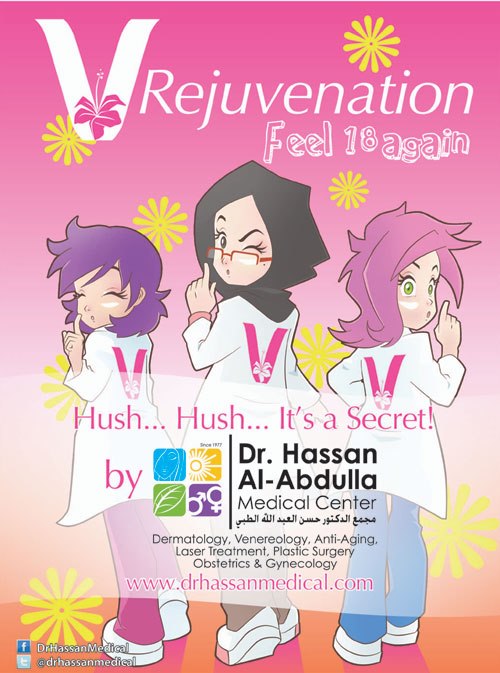 Dr. Hassan Al-Abdulla Medical Center, as ILQ learned this week, works strongly with its competition. Instead of working against other medical centers, hospitals and clinics, Faisal Al-Abdulla explained that they benefit greatly from working together in Qatar. As their medical center is one of the oldest and very well established, they have private imports, which can then be distributed to other hospitals, which helps smaller medical businesses as well. By creating strong relations with their competitors and supporting them, a friendly cooperation is created and more importantly strengthens the medical industry in Qatar and the Middle East. 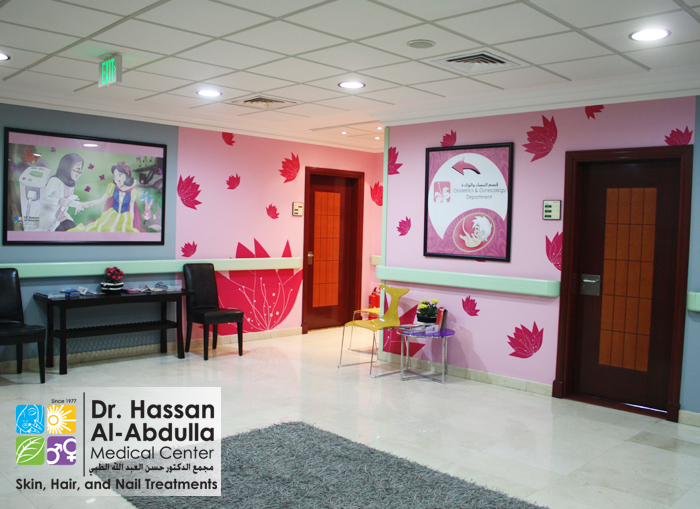 Faisal Al-Abdulla, who sees the medical center as a medical business since he started as the medical center’s CEO in 2006 and took on the management, shared his visions for the future with ILQ. The main objective for the future is the expansion of the social media use and working on customer response. Innovation and Originality is important in new attempts to advertise the clinic, said Faisal Al-Abdulla. The clinic continues to prove successful ways to promote itself and bring the community closer together, without constantly claiming to be the best. Another goal for the future is building a network with other companies in order to support and advertise one another, such as for example with ILQ. The medical center even has their own signature drink which is the healthy energy drink 28 Black. 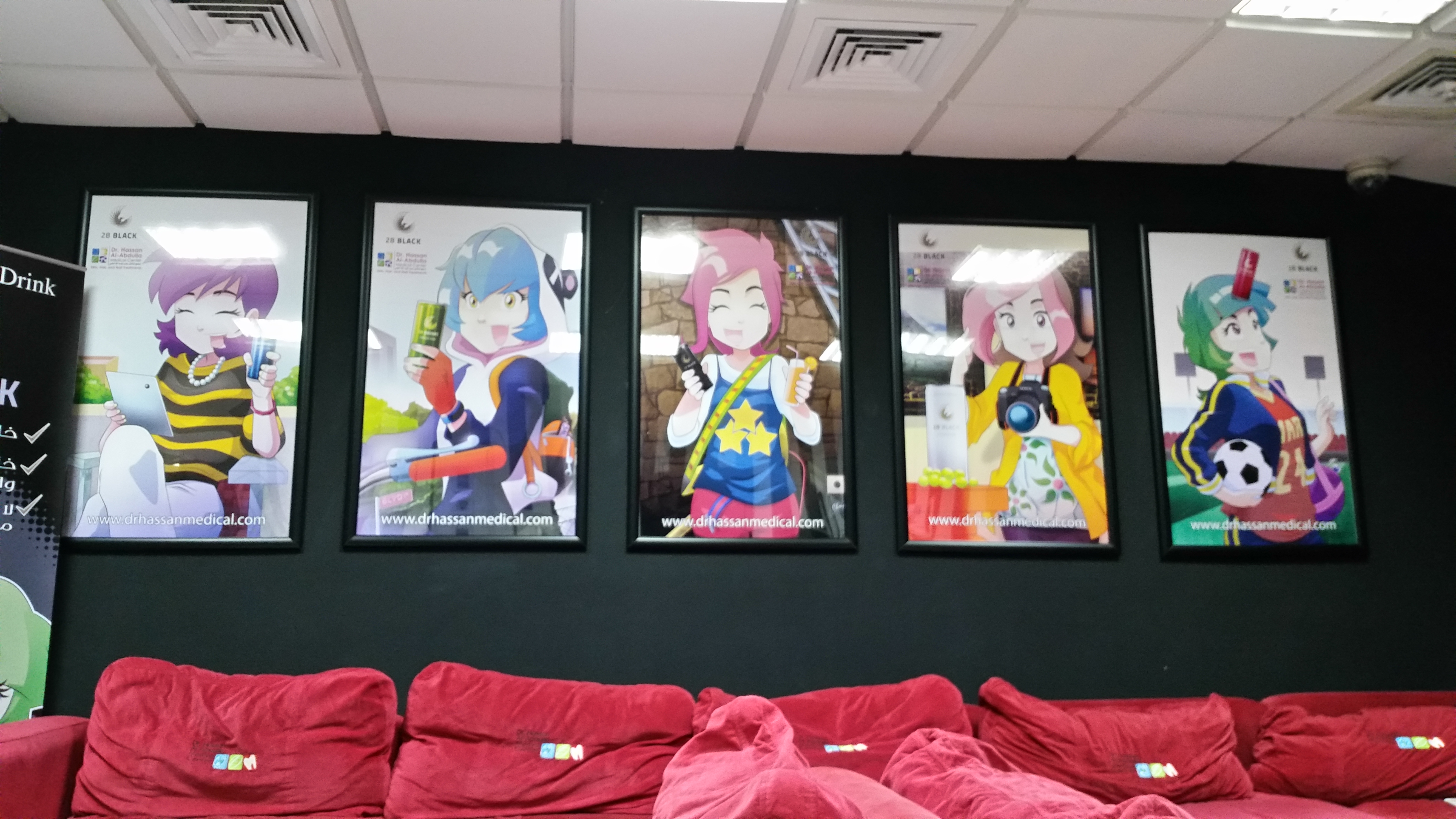 The health center is very busy with around 200 patients seeking consultation or coming for their appointments on average per day, and Dr. Hassan Al-Abdulla himself sees a number of around 50-60 clients each day.

So when can you go to Dr. Hassan Al-Abdulla Medical Center? For consultation and medical investigation, you usually do not need an appointment due to the doctors’ efficiency, and once you’re there you would only need appointments for more complicated treatments. So in case you are wondering which doctor to contact or visit for great consultation without having to wait days or weeks until they have time to see you, you should try going here and you may have a new place to go to, that you might then recommend to your friends.

To learn more visit them on their website http://drhassanmedical.com

Or have a look on their ILQ forum http://www.iloveqatar.net/forum/content/about-us-dr-hassan-al-abdulla-medical-center