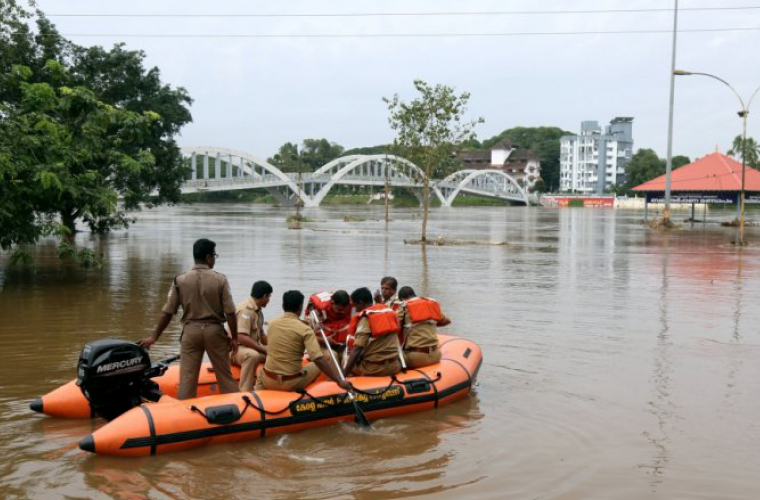 Due to unprecedented heavy rain Kochi airport in Kerala, India has suspended its operation for four days.

Kochi-Doha-Kochi flights operated by various airlines will be affected due to the of the runway at the airport. Currently four airlines – Qatar Airways, Jet Airways, Air India Express and Indigo – operates flights to Kochi daily from Doha.

“Kochi Airport operations is temporarily suspended till Saturday 18, 2pm since the inflow of water is still on a raising trend. The same is due to heavy inflow of water consequent to opening of dams. This is done to minimize the inconvenience to passengers and as a precautionary measure to ensure operational safety,” Cochin International Airport said in a statement.

Many Indian expats from Kerala, who had planned their holidays during Eid and Onam, will be left stranded due to the situation. All airlines are trying to accommodate the affected passenger in flights to Thiruvananthapuram and Kozhikode, the two other airports in Kerala.

Qatar Airways has suspended all their flights to Kochi till August 18. The airline said in a statement that passengers who have booked will be provided alternative arrangents.

“We would like to assure all customers that every effort is being made to assist affected passengers with alternative arrangements, and we would like to thank them for their patience and understanding. “Passengers are advised to call Qatar Airways’ 24-hour call centre on +974 4023 0000 or +91 79 3061 6000 for further assistance,” Qatar Airways said in statement.

Jet Airways have cancelled their Kochi-Doha-Kochi flight for today (August 15) and passengers are given an option to shift their booking to alternative airports served by the airline from Doha.

“We have only cancelled today’s flight and will shift the passengers as per availability to other closer airports free of cost. Already we have shifted 50 percent of the passengers. For tomorrow, we will take a call later depending on the situation,” Anshad Ibrahim, Country Manager, Jet Airways, told The Peninsula.

Passengers who have booked on Jet Airways to Kochi can call 44072222 for further details.

All Air India express flights from Cochin will operate from Thiruvananthapuram, a spokesman of the Indian national carrier said.

A Doha-based official told The Peninsula in an email that "due to closure of Cochin airport, IX 475/476 COK/DOH/COK of 15/16/17th August will be operating as TRV/DOH/TRV on same schedule timing."

According to the Indigo airlines website the Doha-Kochi and Kochi-Doha flights on August 15 stand cancelled.

“Operations were suspended after water reached the runaway in the early hours of Wednesday. Most of the incoming flights are diverted to Thiruvananthapuram and Kozhikkode airports,” CIAL director ACK Nair told The Hindustan Times newspaper.

It has been raining heavily in several parts of the state since Tuesday evening. The authorities were forced to open 33 dams across Kerala.

The Indian weather bureau has forecast more rains till Saturday.

“Workmen are now engaged in breaking down a portion of the compound wall to let out rising water even as three heavy duty motors are being used to pump out water. The airport operations area, including the runways, are under three to four feet water. The western compound wall has prevented free outflow of water and that is being broken down partially,” The Hindu newspaper reported.

Want to read more articles relevant to Kerala's flood? Click the links below!

Here's how to help flood-hit people of Kerala from Qatar