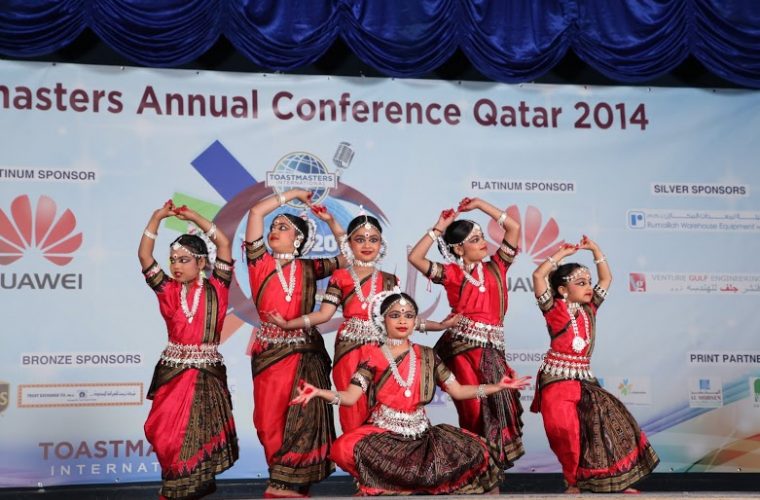 Toastmasters in Qatar, collectively known as‘Division E’ created history on 25th and 26th April when they conducted their annual conference in the most spectacular way to date with over 500 attendees from over 40 clubs across Qatar. Toastmasters Annual Conference Qatar 2014 (TAC-Q 2014) had a unique theme “Communicating Culture” proposed by TAC-Q Chairman TM Nasimudheen Abdul Hameed. Toastmasters clubs across the country had held their annual club contests under four categories, International, Humorous, Evaluation and Table Topics. The club winners proceeded to the next round, known as area level, and the area winners competed in the grand finale at division level, known as TAC-Q. Day 1of TAC-Q 2014 was held at the state of the art Dukhan Recreation Center and Day 2 at Grand Hyatt Hotel, Doha.

On Day 1 the opening act was a spectacular cultural dance by students of DPS-MIS School but what captured everyone’s attention was the music. The theme music was exclusively produced for this event. The catchy 6 minute tune was penned by the TAC-Q 2014 Entertainment Chair DTM Sameer Hasan Moosa, who was instrumental in bringing out the beautiful final product.

Day 2 was kick started by a world class keynote speech by the World Champion of Public Speaking 2007 Vikas Jhingran. Mr Jhingran had been flown in from the US to inspire and motivate the attendees. Though the International Speech contest (Arabic)and International Speech contest (English) were the centerpiece of the agenda for the day, the attendees were kept on the edge of their seats throughout the evening with a variety of cultural showsincluding performers from IAID, members of Filipino Dance sport and Social Club and Gaveliers who all illuminated the star studded event.

The contest results from Day 1 were announced along with contest results of Day 2. All first place winners will compete at the district level in Oman from 15th -17th May 2014.

The event closed with an address by the General Manager of Huawei, the event’s Platinum Sponsor. Devoteam and Bin Ghalib were the gold sponsors. Rumaillah Warehouse Equipment and Venture Gulf Engineering were the silver sponsors. Teyseer, IDRAK, UPS, Intertec Group and Trust Exchange were the bronze sponsors. QDC, Galfar, Mahindra Holidays and Al Balagh were the support sponsors and Al Mohsen Printers &Advertisers and WINK Advertising were the print partners. All Sponsors were acknowledged and thanked for being part of the wonderful event.