AUDI AG: for the first time, over 900,000 customers in the initial half of the year

Compared with the same period last year, AUDI AG’s worldwide sales from January to June increased by 3.8 percent to around 902,400 cars. For the first time in the company’s history, more than 900,000 customers had already chosen the brand with the four rings by mid-year. Even though important model changes are imminent in a number of markets, sales climbed further in all world regions – particularly on the American continent (+12.4%). In June, worldwide deliveries of around 157,450 were slightly above the level of the same month last year (+1.3%).

“So far, 2015 has been a year of challenges for us. We are meeting these challenges successfully and remain on track,” says Luca de Meo, Member of the Board of Management for Sales and Marketing at AUDI AG. “Many markets have become significantly more difficult, especially in Asia and Eastern Europe. In addition, we are preparing for new generations in key volume models and markets.

These make up around 40 percent of our global sales.” As successor to the top selling Audi model, the new A4 will first be launched in Europe in the fourth quarter. In the full size class, the new Q7 arrived at dealers in the first European markets in June before successively premiering in the other regions of the world. The model changeover for the updated generation of the A6 is also still underway in some regions. Strong growth in the first half of the year was recorded by the globally available A3 family, up 35 percent to around 195,350 cars delivered. Demand for the Q3 (+7.5% to around 100,950 cars) and Q5 (+3.9% to around 126,200 cars) SUV models also continued to grow. SUV sales showed particularly strong growth in the United States where the combined models of the Q3, Q5 and Q7 increased by 28.5 percent in the first half of the year.

Across the entire lineup, the United States achieved the highest increase in sales among the ten largest Audi sales markets with growth of 11 percent to 93,615 deliveries. Significant increases in Canada (+19.6% to 13,463 cars) and Brazil (+39.4% to 8,683 cars) also made the American continent the growth engine for Audi during the first half of the year: up 12.4 percent to around 127,100 customers. Audi’s dynamic pace in the region continued unabated in June with an 8.3 percent increase to 18,262 deliveries in the U.S. market and a 42.9 percent increase in sales in South America to around 2,350 units. In Europe, the new generations of the A6 (+9.2% to around 52,400 cars) and A7 (+23.9% to around 6,300 cars) provided positive momentum in the first half of the year. The new TT also significantly expanded its customer base (+78.1% to around 12,300 cars). Across the entire range of models, deliveries of the four rings increased in Western Europe by 4.1 percent to around 394,600 since the beginning of the year.

In June, sales in the region reached around 67,100 cars delivered to customers, an increase of 4.9 percent. Among the major Western European markets, cumulative demand increased notably in Spain (+10.3% to 25,146 cars), Italy (+7.9% to 28,030 cars) and Germany (+5.5% to 147,763 cars). In contrast, the strong market downturn in Russia continued during the first half of the year ( 32.3% to 12,155 cars). Market developments in the Asia Pacific region were also mixed in the first half of the year. While South Korea (+9.0% to 14,560 cars) joined the ranks of Audi’s top ten sales markets for the first time, and Australia also reported significant growth (+17.4% to 11,339 cars), the declining overall market in Japan was reflected in Audi’s sales performance: down 1.8 percent to 15,718 cars. In China, the brand was able to increase its sales slightly by 1.9 percent to 273,853 cars since January, but the current restraint of Chinese customers in the upper market segments is also clearly felt by the leading premium car company. In June, the sales figures of Audi in China declined by 5.8 percent to 47,831 cars delivered. 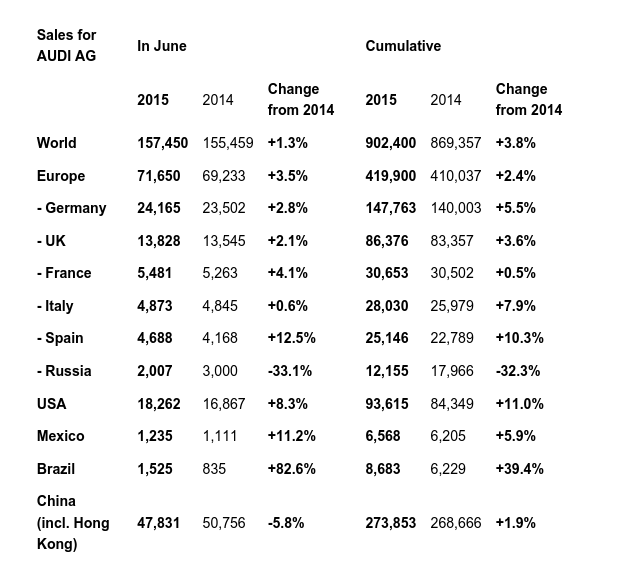