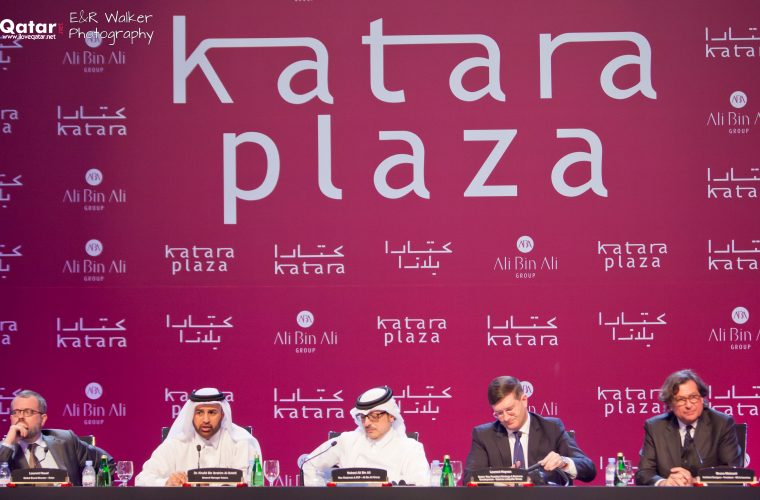 Galeries Lafayette as anchor tenant, Middle East’s first ever evian®SPA and a dedicated Children’s Mall to be part of the project, which will open doors in 2016.

The Ali Bin Ali Group unveiled its plans to run “Katara Plaza”project, which will open its doors in 2016. The project is being built on an area of ​​over 38,000 square meters, in the Cultural Village Foundation “Katara”, and is poised to be a unique commercial plaza that includes a series of features, which are the first of its kind in Qatar. The project signals the clear intension of the management to invest in one of the largest and most strategic locations in Qatar, with the added attraction of developing it in line with the atmosphere of global culture offered by Katara.

“Katara Plaza” project, which is one of the planned projects included in an agreement jointly inked by Ali Bin Ali Group with Katara, will provide a unique and distinct experience as it blends a classical architectural experience with traditional heritage, thus, reflecting the vision and objectives of the Cultural Village Foundation. Katara is one of the most important and unique creations of Qatar, thanks to its identity as a cultural edifice that combines both the Qatari national identity and global arts.

‘Katara Plaza’ project will offer a relaxed atmosphere and designated spaces for shoppers, including some of the most famous brands in the world. Thisproject will also offer recreational experiences, in line with culture and entertainment. It will exemplify innovation. The project will have a pioneering, air-conditioned and open space that provides year round comfort utilizing a state of the art system that uses the latest ground cooling technology, thereby presenting a perfect blend of artistic architecture, innovation and maximum comfort.

Speaking of this new venture, Mr. Nabeel Ali Bin Ali, Vice Chairman & EVP of the Ali Bin Ali Group said “The Ali Bin Ali Group recognizes the tremendous potential for growth available in the Qatari market, supports the Qatar National Vision 2030 and promotes the country’s status as a true trendsetter in the Gulf region. It is with great pleasure and excitement that we have embarked on this project. We expect that “Katara Plaza” would unlock a unique world class shopping experience offering the Qatari market many first of its kind experiences that can be valued and enjoyed as never before”

Among the deals inked already, is the arrival of Galeries Lafayette to Qatar. The Ali Bin Ali Group has succeeded in attracting the well known French department store which is the undisputed leader in department store retailing in France and other global locations in the areas of fashion, luxury goods, accessories, perfumes, cosmetics, leisure, gastronomy and home interiors. Work on Galeries Lafayette has already commenced with the world famous architect Bruno Moinard taking on the creation of the stores. Moinard has crafted a name for himself as an architect who intrinsically blends luxury and art.

Another distinguished tenant who hasalready secured its place within “Katara Plaza” is the French natural mineral water brand evian®. Through this confirmed tenancy at Katara Village, Qatar will welcome one of the very few exclusive evian®SPA in the world. evian® as a well-being ambassador has developed a full exclusive spa concept based on evian®’s core values of purity, health, and youthfulness. As a result of an innovative approach, the wellness experiences proposed in evian®SPA Doha will literally transport the customers to an evian® universe and its French Alpine birthplace. This strategic step of “Katara Plaza”, to bring in the evian®SPA is poised to offer visitors a unique new stage of wellness, that goes beyond classical spa experience

The children's mall is a unique and pioneering experience in the region and an example of innovation and architectural design. Its design portrays the form of two big gifts wrapped in red and gold. The uniqueness of the design reflects Qatar’s inclination towards developing landmarks of modern architecture. The commercial complex, which is the first of its kind in the Middle East, seeks to surprise visitors and draw a smile on their faces, within an overwhelming atmosphere of joy and fun.The goal of “Katara Plaza” project is not restricted to the inclusion of chain stores alone. The project will also offer a complementary and integrated experience, rich and vibrant, beginning with its landscapes and sandstone buildings, and ending up with its interlocking passages, arches and breezy walkways. Moreover, “Katara Plaza” project will provide residents of “Katara Hills” project with the opportunity of firsthand experience of this outstanding environment. The tenants of spaces in “Katara Plaza” who have signed contracts, share a vision that entails providing a unique experience for anyone who sets foot on this pioneering project. What distinguishes this project is the integration of visual aesthetics, entertainment, hospitality, trademarks, leisure, art and culture all in one outstanding area.

His Excellency, Dr. Khalid bin Ibrahim Al- Sulaiti, General Manager of the General Foundation of the Cultural Village “Katara" said that the cultural district offers a unique and unprecedented model, in investment-based cultural projects. This civilized foundation was the embodiment of the insightful vision of the Qatari national leadership in pursuing the transition from a community that has an economy dependent on hydrocarbon resources to a community that is based on a knowledge economy. In addition to the fact that the cultural district is a gigantic architectural masterpiece that raises awareness of the importance of every culture and civilization, through the hosting of local, Arab and international events, workshops, exhibitions and festivals in various art, thought and culture to form a meeting place for all cultures in the world, Katara also provides all means of tourism, entertainment, shopping, through new projects.