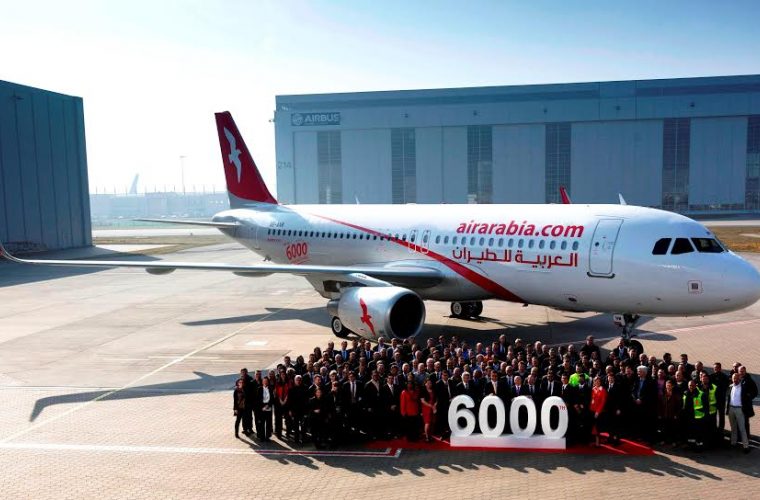 Air Arabia, the first and largest low-cost carrier in the Middle East and North Africa, today announced that it has taken delivery of its 37th aircraft, the 6000th Airbus A320 made to date. The aircraft, which has been adorned with a commemorative 6000th logo, was unveiled at a ceremony in Hamburg, Germany, attended by senior officials from Air Arabia, Airbus and CFM as well as the entire Airbus technical team. Air Arabia has now received 23 of the 44 A320 aircrafts ordered from Airbus in 2007, and once completed in 2016, the order will more than double the size of Air Arabia’s existing fleet. Adel Ali, Group Chief Executive Officer, Air Arabia said: “The delivery of our 37th aircraft marks a significant step in the development of our fleet expansion strategy. We are proud to be in the process of creating the industry’s most modern fleet as we look forward to receiving seven more aircrafts this year. Air Arabia is committed to not only providing customers with the best value for money and most convenient flights, but these new aircrafts also ensure the highest quality of travel and comfort.” The latest A320 aircrafts come equipped with Shraklets, fuel saving large wing tip devices which reduce fuel burn and emissions by significantly improving the aerodynamics of the aircraft. Air Arabia is the first carrier in the Middle East to fly these planes. The A320 Family is the world’s best-selling and most modern single aisle aircraft Family. All Air Arabia aircraft cabin interiors are fitted with a world-class comfort seats offering highest seat pitch of any economy cabin across the globe and therefore, offering passengers extra leg room to sit back and relax during their flight. - ILQ News -