A380 to start flying passengers on Oct 10 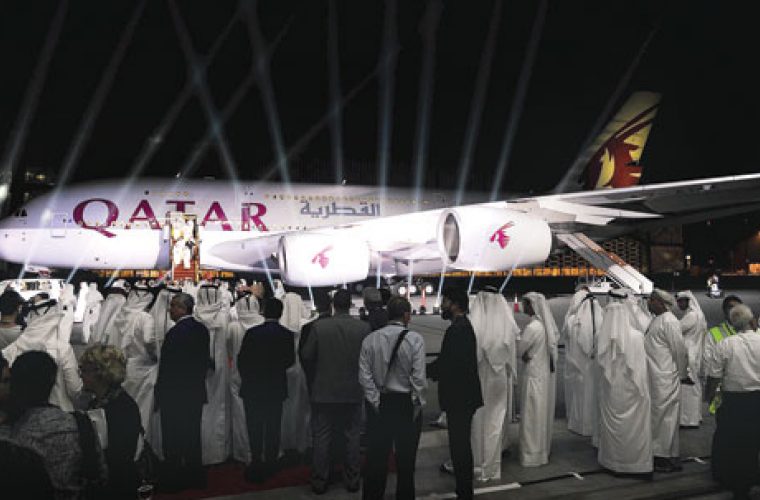 Qatar Airways’ first A380 double-decker aircraft that arrived yesterday has 517 seats in a three-class configuration, with eight seats in first class, 48 in business class and 461 in economy.

Crew will undergo flight training in the aircraft for 15 days, and it will commence commercial operations on October 10 on the Doha-London route.

Qatar Airways (QA) has placed 10 firm orders for Airbus A380 aircraft, with the option to buy three more. Four of the planes are set to be inducted into its fleet by the year end.

The airline did not disclose the price of the aircraft. The list price of the super-jumbo is about QR1.38bn ($380m), which may vary depending on the configuration and other specifications.

In the economy class-only seating configuration, it can accommodate 853 passengers and fly non-stop for more than 15,000km.

As on August 31, 2014, there were about 139 A380s in commercial operation. Emirates, Singapore Airlines, Qantas of Australia and German carrier Lufthansa are some of the major operators of the super-jumbo.

Airbus has received about 318 firm orders and delivered 139 aircraft, and Emirates, with 140 firm orders for the airliner, leads the list, accounting for 44 percent of the firm orders.

The aeroplane has 16 exits, but half of them have been blocked. A total of 853 passengers and 20 crew can evacuate the aircraft in the dark in 78 seconds, less than the 90 seconds required for certification.

The A380 project was announced at the 1990 Farnborough Air Show, with the stated goal of achieving 15 percent lower operating costs than Boeing’s 747-400.

Components for the A380 are provided by suppliers from around the world; the four largest contributors, by value, are Rolls-Royce, Safran, United Technologies and General Electric.

The first A380 was delivered to Singapore Airlines on October 15, 2007 and it entered commercial service on October 25, 2007 between Singapore and Sydney.