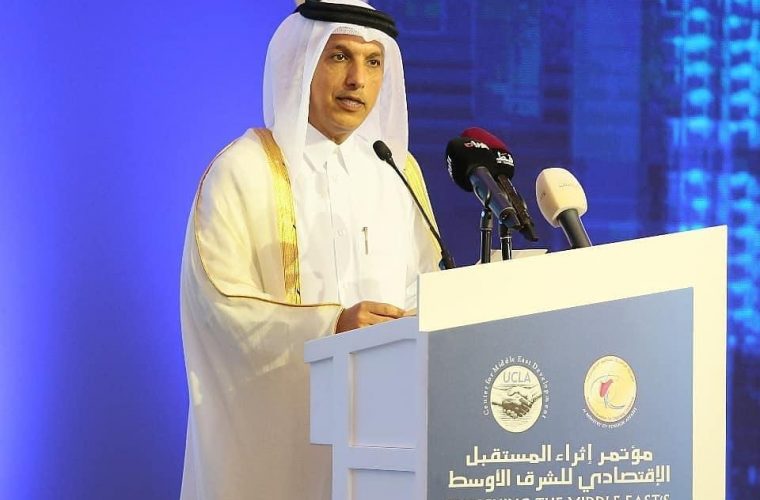 The two-day event witnessed the organization of interventions and seminars that discussed a number of economic issues in the region and the world, with the participation of about 270 prominent personalities from 73 countries.

Organized by the Permanent Committee for Organizing Conferences at the Ministry of Foreign Affairs in partnership with the UCLA Center for Middle East Development (CMED), the Conference addressed the key challenges facing the Middle East and North Africa region, and provided an overview of the most important issues in the region and the world, while sharing ideas and insights on the future prospects of the MENA region and the world in the economic field.

H.E. Undersecretary of the Ministry of Commerce and Industry Sultan bin Rashid Al Khater said in a closing speech that the conference since its inception in 2006 has become one of the most important international economic conferences, which for the past period has been concerned with the economic aspect in the Middle East and Asia, and the conference was held this year while the contemporary world is still going through difficult and complex circumstances and has become in dire need of effective initiatives and solutions.

His Excellency explained that the conference, during its sessions and workshops, discussed many important economic and political issues, including the economic future of the Middle East and the impact of the US election campaign on it; the impact of the confrontation between Iran and the United States on the region; and the Sino-Middle East relations. The conference also discussed the most important developments in the areas of transforming towards clean energy sources, aggregate growth, job and employment opportunities, entrepreneurship, and the climate implications on energy and economy in the MENA region.

His Excellency praised the sessions of the conference and the speakers for their remarkable efforts, which gave the conference credibility and strengthened its position as a distinguished global economic platform, noting that the international and regional participation were provided ideal opportunities for constructive dialogue and exchange of ideas to achieve the desired goals.

His Excellency stressed the prestigious position that Qatar has assumed as a global platform for international conferences and forums, to discuss various issues and challenges of concern to the region and the world, bringing together political, intellectual and academic elites for dialogue and exchange of ideas in order to provide solutions leading to inclusive development and stability of societies.

H.E. the Undersecretary of the Ministry of Commerce and Industry pointed out that this success in the State of Qatar is attributed to the vision of the wise leadership, and the firm political will and commitment and diligent and continuous efforts in the implementation of development requirements to achieve Qatar Vision 2030, which has achieved continuous accomplishments and diverse experiences to sustain success and development.

His Excellency expressed pride in hosting the State of Qatar for important international conferences and cultural, political and economic events, enabling it to continue to build bridges of cooperation and transfer of knowledge to the world and meet its humanitarian and international commitments.

In his closing speech, His Excellency expressed his great pleasure to meet the participants in Doha, thanking Professor Steven Spiegel and the team of the Center for Middle East Development at the University of California Los Angeles for their efforts and active contributions to organizing this important conference, in cooperation with the Permanent Committee for Organizing Conferences at the Ministry of Foreign Affairs.

For his part, Director of the UCLA Center for Middle East Development (CMED) Professor Steven Spiegel said that the conference discussed many issues of concern to the Middle East and the effective development solutions that can be applied in this region which enjoys enormous opportunities.

He noted that among the issues discussed at the conference were the political and economic challenges facing the Middle East, entrepreneurship as a catalyst for growth in the region, enhanced cooperation between the public and the private sectors, youth empowerment, women's role in development, emerging challenges from climate change, technological development, artificial intelligence and many other issues that benefit the region's economy.

He said that the participants in the conference stressed that the economic and political challenges in the countries of the region will prompt them to reconsider their policies, especially the involvement of the private sector, which would provide a driving force for the benefit of peoples and help in diversifying the economy.

The participants also stressed that countries of the region should take the necessary steps to enhance their growth by strengthening governance and enhancing their institutions, through the adoption of macroeconomic reforms and combating corruption, as well as the importance of entrepreneurship as a way to rise from recession, create more jobs and improve governance principles to strengthen the economies of the region.

The participants also noted that the issue of climate change will also cast a shadow on the region because it has a direct impact on reducing demand for oil and gas and hence the need to rely on renewable energy sources and economic diversification.

They also stressed the importance of stimulating and enhancing interest in the agricultural sector, which has a direct impact on all other sectors of any country in the region, due to the importance of food security issues which pose urgent challenges that require finding effective solutions.

At the end of the closing ceremony, Director of the UCLA Center for Middle East Development (CMED) Professor Steven Spiegel presented a gift of appreciation to H.E. Ambassador Abdullah bin Abdulrahman Fakhro, the CEO of the Permanent Committee for Organizing Conferences, for his efforts throughout the conference.