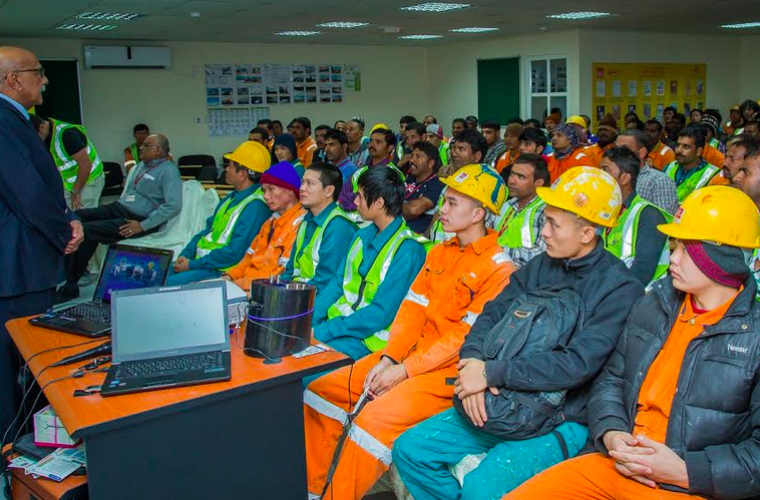 The Public Relations Department of the Ministry of Interior held a range of awareness programs for the senior employees of Qatar Rail Company and staffers including drivers, security personnel and workers of the contracting companies under Qatar Rail, in collaboration with General Directorate of Traffic, General Directorate of Civil Defence, Criminal Evidences and Information Department, Community Policing Department, Public Guards Department and Drug Enforcement Administration. The second phase of the programme concluded on Wednesday 20 January 2016 at the Workers complex of the Qatar Rail contractors near Qatar University. The 2-day programme was attended by 400 drivers and equipment operators and other workers of different nationalities.

The awareness programme focused on topics related to padestrian safety, fire safety and effects of drug abuse and addiction as well as it included lectures on customs and traditions of the Qatari society and introduction to Community Policing.

Engineer Hassan Ahmed al Hamed al Marwani, Executive Director of Technical Interface Department of Qatar Rail Company expressed his appreciation on the great cooperation of the Public Relations Department of the Ministry of Interior with Qatar Rail Company to deliver awareness programmes for the workers. He said that the company is highly concerned in raising the safety awareness of almost twenty seven thousand workers under its different projects and their social integration. The first stage of the programme was started in June 2015 in which more than 250 senior expatriate senior employees including directors of different departments, mangers, engineers and technicians participated. The programme held in October 2015 was intended for the workers in building sectors, security staffs and drivers. About 790 workers took part in the programme that was held in association with seven departments of the Interior Ministry including Traffic, Civil Defence, Public Relations Department, Drug Enforcement, Public Guards, Criminal Evidence and Information and Community Policing Departments”. He added.

He expressed his gratitude to the Ministry of Interior pointing out that the programme would continue in future in order to reach out its benefit to all workers under the company.

Salah Mustafa Khalil, form Drug Enforcement Administration gave his lecture on the threats and effects of drug abuse on individuals and society and underscored the Qatari Drug Enforcement Law.

Ft. Lt. Fahad Mubarak Shoraida Al Abdullah, traffic awareness officer spoke on the traffic mistakes committed by the drivers and discussed how to prevent road accidents. Referring to the difference in the traffic laws in Qatar and other countries he told that the drivers in Qatar should be well aware of the law here to avoid traffic incidents.

Warrant Officer Khalil Rashid Al Noaimi, from Civil Defence gave his lecture on the causes of fire and ways of prevention. Dr. Muhammad Bahauddin introduced the Community Policing and its services to the citizens and residents in Qatar.

During the program, some of the real visuals of traffic incidents recorded by the Traffic cameras that shed light to the common traffic errors committed by drivers and pedestrians which result in big human and material losses were also exhibited.

More than 1430 employees including managerial, senior and administrative staff of Qatar Rail, drivers, operators, security staff and workers from the subcontractors working for Qatar Rail's various projects attended the first and second phases of the traffic, safety and security awareness program.