Why are abayas mostly black in Qatar? 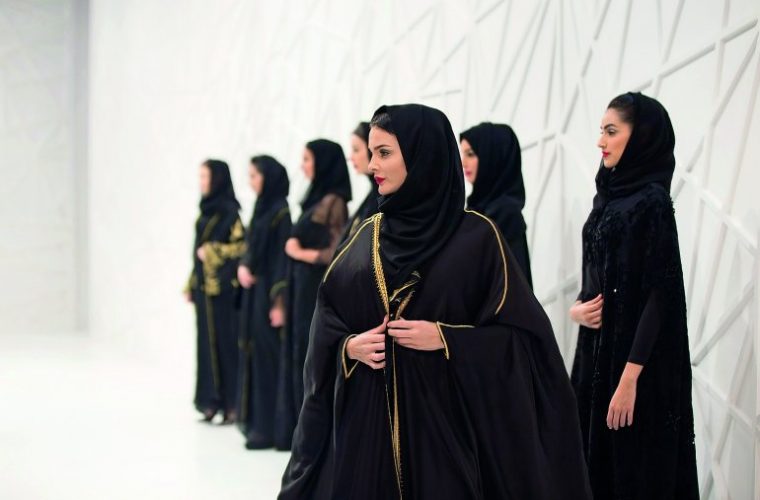 For most women in Qatar and the rest of the Middle East, the abaya is a sign of respect, dignity, modesty and an easy and convenient way to hide the body according to Islamic teachings. It is long and covers the whole body from the neck to the wrists and then down to the feet. It is usually loose and flowing, though some of the newer designs are more form fitting. The abaya is a very common sight in Qatar as well as the other Middle Eastern countries and is also becoming more common in other Muslim countries where woman find it a convenient and comfortable attire to wear over their everyday clothes when they go out of their homes.

It is believed that the abaya, which was also used by women in the pre-Islamic era, was originally worn to protect the body from heat and sand, to avoid direct exposure to the sun, to stay cool in the summer heat, and as a way to protect them from the winds in winter. It still is! It was also, in ancient times, considered a suitable attire and did not hinder women’s everyday chores round the house.

The abaya is complemented with a headscarf called a Shayla or hijab. This is a scarf that’s tied around the head so no hair is visible. Some women also wear a niqab, which covers both the head and the face. It’s mostly a matter of personal choice or traditions.

The abaya is mostly black as you must have seen when you are out and about in Qatar, but sometimes you will see someone in a coloured one. It’s getting quite common now, but on the whole, a black abaya is the preferred choice!

But, have you ever wondered why?

Look no further. We have the answers right now, right here!

First, let’s talk about the ancient legends that surround abayas and why they are black...

Legend 1: The merchant and the poet

As the legend goes, during the Abbasid Islamic era, a few decades after Prophet Muhammad (peace be upon him) passed away, a merchant brought a large collection of headscarves in different colours from Persia or Iraq to Madinah. He was able to sell all the scarves, except those that were black. Perhaps, the women of that time liked bright, coloured scarves and not black ones.

The merchant was worried and went to a famous poet of that time called Darimi and requested him to compose an advertisement for him in the language of a poem. The poet complied, and his poem advertisement went something like this:

"Tell the beauty in the black veil

What have you done to the pious worshipper?

He was rolling up his sleeves, getting ready for his prayers when you stopped him at the door of the mosque

You have stolen from him his religion and certainty and left him bewildered, without guidance..."

According to the poem, the abaya is a symbol of nobility and worn by the upper classes; it is the best way for a woman to appear beautiful and yet be mysterious. Within no time, gossip spread throughout Madinah about the worshipper who changed his pious lifestyle because of the woman dressed in black whose beauty and the mystery that surrounded her left him dazed.

From that day onwards, according to the legend, black became the colour of the abaya and the headscarf in the Arab world and women felt noble and wealthy; over the centuries, the tradition has not changed and continues to this date.

There is another legend that surrounds the black abaya. It is believed that in ancient times, when life was simple and resources limited, women had to create their attire from whatever was available. More often than not, black goats were handy, and their skins were used to make abayas. Hence, black just kind of stuck, and became the colour of the abaya.

Now that we've talked about the legends surrounding black abayas, let’s talk about the reasons why abayas are mostly black in today's world...

One of the reason’s that an abaya is black is that even if a woman wearing an abaya stands under a harsh or bright light, the outline of her body would not be visible through the abaya.

Black has been the traditional colour of the abaya for hundreds of years, and many Muslim women want to continue adhering to the traditions they have grown up with and grown used to. It is a sign of respect for the traditions that are ingrained within a Qatari women’s mind and heart.

Since almost every woman in Qatar is wearing a black abaya, a coloured one, which you don’t see very often, stands out and for those that want to blend in and remain inconspicuous, a black abaya is the best choice. After all, not everyone wants to stand apart from the crowd.

Although black colour absorbs more heat, studies have revealed that black provides better convection (the transfer of internal energy into or out of an object by physical movement) of air inside a black abaya when outside in the summer sun. This means that a woman wearing a black abaya will feel as cool as a man wearing a white thobe (Arabian men’s outfit that covers the arms, neck and whole body and goes down up to the feet) that reflects the sun’s hot rays.

While most women in Qatar may opt for a black abaya for the above reasons, another reason that cannot be ignored is that black is always in. Not only does black look elegant and trendy, it makes one look smarter and slimmer, too! That’s a good enough reason, don’t you think!

To learn more about the abaya and and the hystory that surrounds it, please click here.

Do you wear an abaya? Is it black? What are your reasons for wearing a black abaya? Would you wear a coloured one? Do let us know in our Comments section. Like and share the article - it keeps us going!