The history of the abaya 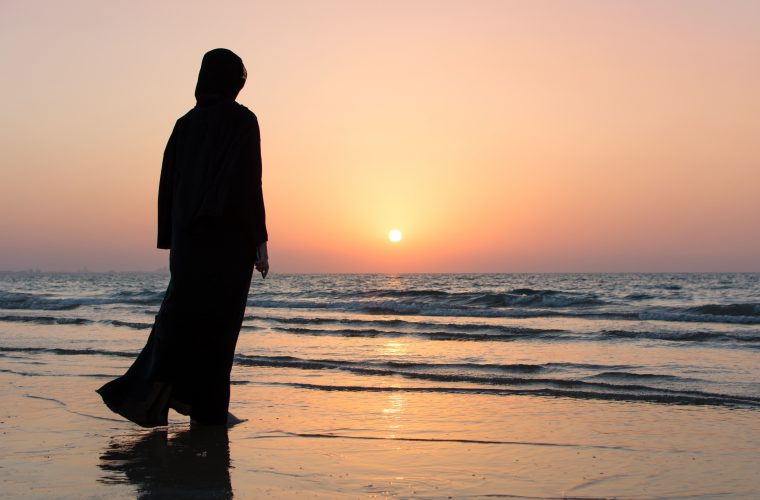 An abaya is a long flowing robe that is usually loosely fitted and worn over everyday clothes. It goes down to the feet and has long sleeves so the body is fully covered. Most of the time an abaya is black, but over the years, one does tend to see some coloured ones. In Qatar and all over the Middle East, you will see local women, and lots of expats as well, wearing the abaya. In fact, it is now a common sight in many other Muslim countries where women find it convenient and the best way to cover their bodies, leaving just their faces, hands and feet exposed.

To cover their heads, most people opt for the shayla or hijab, which is a scarf tied around the head so no hair shows. Some people complement the abaya with a niqab, which covers both the head and the face. Some non-Muslims also wear the abaya as they find it easier to blend in with the locals and they don’t have to worry about what they are wearing underneath.

Rationale behind the abaya

The rationale for wearing the abaya in Islam is mostly assigned to the following verses from the Holy Quran. These verses are used to justify the donning of the abaya.

"O Prophet, tell your wives and daughters, and the believing women, to cover themselves with a loose garment. They will, thus, be recognised and no harm will come to them." (33:59)

From the above verses, it can be derived that it is in the benefit of women to cover their bodies properly and keep them hidden from men who are not related to them, especially when they are out of the house. This will protect them from the impure thoughts of men and from disrespectful and discourteous acts.

History of the abaya

The history of the abaya is rather vague and unclear, but it is believed that this robe-like garment has existed for more than 4,000 years. Historical evidence points towards its use by ancient civilizations, especially the Mesopotamians who wore clothing that was long and as loose as the abaya of today. There is doubt though that, at the time, the garment was probably not known as the abaya. It is also believed that the abaya-like garment of this era was probably more revealing than the post-Islam abaya.

In pre-Islamic times, it is believed that the covering of a woman’s body was more about status than about religion. It was, perhaps, seen more as a symbol of extravagance and luxury, and donned by women who did not have to do any work. It is also widely believed that they wore a veil with their abaya-like garment to separate them from working-class women who could not afford a veil with their abaya-like garment.

When Islam came into being in the 7th century and the Quran was revealed, the concept of women covering their bodies became more prominent and its significance increased, especially in light of the Quranic verses given above.

There is speculation that the garments used by Muslim women to cover themselves after the advent of Islam may have been inspired by the abaya-like garment of the pre-Islamic times, and it is at this period of time that the abaya acquired the religious connotation that most Muslims associate it with today, though it has undertaken many evolutions since that time.

In most Arabian cultures like Qatar and other parts of the Muslim world where the abaya has become quite the norm as a representation of religious devotion and a symbol of the Arabian culture, it is mostly black in colour, though some colour variations can be seen amidst the all black. Since the abaya is the only garment seen on those that wear it, with time, it has evolved into somewhat of a fashion statement as well, with many different designs and variations now available in the market. One thing remains the same though, at least in most cases: the purpose of the abaya – to cover the body!

In the era before the Arab world became oil-rich, a Bedouin belonging to the upper class would wear a black abaya called the 'laff' that was square-shaped with two holes for the hands (this would hide the arms) and had a wide golden trim around the neckline area. A normal Bedouin woman would wear a large double-width headscarf or shayla that encircled the entire upper part of the body and worked like the abaya.

By the 1970s when oil was discovered in the Arab world, the abaya became a subject of some experimentation with different types and weights of silky material taking over. Towards the end of the 1970s, the abayas did not cover the whole body. In fact, they were bunched up at the waist area and one side was tucked under the arm, such that the clothes worn on the lower part of the body were visible.

It was in the 1980s that the shoulder abaya was introduced. The shoulder abaya was a long black cloak-like garment that covered the whole body. It had proper full sleeves and was complemented with the narrower-styled shayla that covered the head. Experimentation continued with different types and weights of silk and different styles of embroidery and decorations on the abaya were also introduced. Crepes, chiffons and georgettes were also used because they were more flowy.

With time, the abaya continued to evolve and in the 1990s, though the basic style and shape of the abaya remained the same, more embroidery and decorations like lace, stones that could be ironed on become a norm. The shayla was always completed with the abaya and often paired together in the markets and souqs with similar designs and decorations. A new style of abaya was also introduced during this time. It came from Oman and was known as the ‘omaniyah’ because it was similar to the tunics donned by the men of Oman. It also came to be known as the ‘Islamic abaya’ because it was closed from the front side, did not open like the previous abayas and could easily be slipped over the head.

In the first decade of the 2000s, the experimentation of the abaya took on a new meaning with the introduction of many different styles and cuts, some too blingy, some over-the-top, and some even rather bizarre. Some abayas had bats, butterflies or anything that had wings. Some abayas even had waistlines which were emphasized by different types of wide or narrow belts that accentuated the body shape and went against the rationale behind the abaya- to not show off the body shape. All of this was done to blend in with the western style of dressing.

Today, the abaya is not just a body covering garment, it has transcended mere functionality and become an expression of individualism as well as acquired a standing of its own. Abaya designers have taken the abaya to a whole new level with emphasis on global fashion trends along with an awareness of changes in the environment and the world in general.

The abaya industry has evolved just like the abaya itself. Not only can you buy an abaya from various shopping malls, souqs and bazaars, now you can have them custom made by an abaya designer which is becoming quite the trend in today’s world, especially among the elite.

Did this article help shed more light on the abaya? Did you know that the abaya dated back to ancient civilizations and was part of a woman’s attire more than 4,000 years ago even before Islam? For those of you who do wear the abaya, what kind of abaya do you wear? Is it simple or is it ornate? Tell us what you think of this article and if you found it informative in our Comments section. Like and share the article – it keeps us going!