Rumi: The Musical to be performed at the 2022 D’reesha Performing Arts Festival 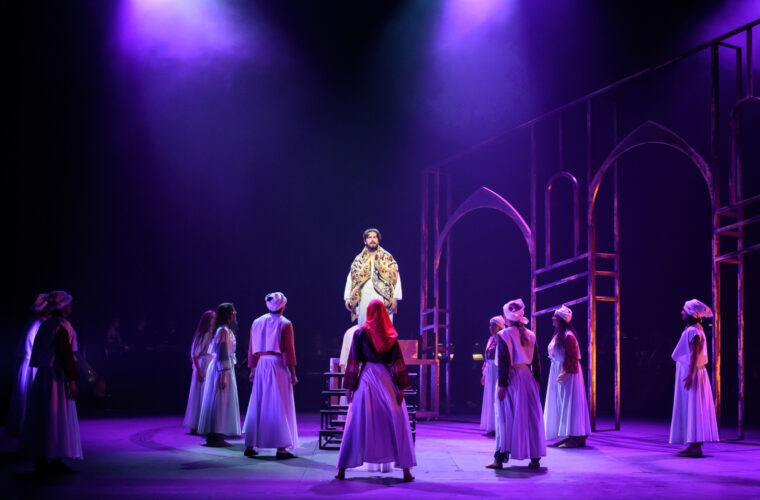 Bringing a spellbinding performance with a pioneering West End cast and otherworldly music to the stage, Rumi: The Musical takes flight from its star-studded debut in London and travels home to Doha for a captivating two-night-only concert at the annual D’reesha Festival of Performing Arts.

In a one-hour special of the original show, which was co-created by renowned Qatari composer, songwriter and symphonic artist Dana Al Fardan, and prominent British-Lebanese theatre actor, singer, and writer, Nadim Naaman, Rumi: The Musical will be one of the most illustrious and anticipated theatre performances in Doha whilst the global gaze is on Qatar for the FIFA™ World Cup.

With one of the most diverse and inclusive casts in the history of the London West End, the talented people who brought this critically acclaimed musical to life at the London Coliseum will now visit Doha to give a home audience a chance to marvel at the show’s music, set design, and storytelling first hand.

Musicians from London will perform with musicians from the Qatar Philharmonic Orchestra and Qatar Music Academy alongside world-renowned Korean Pianist Sonja Park.

Based on the life story of 13th-century philosopher and poet Jalal Eldin El Rumi by Evren Sharma, this is Dana and Nadim’s sophomore theatre show and their second time bringing a Middle Eastern poet onto the global stage. Furthermore, the show’s cast reflects its ties to the MENA region and many of the countries through which Rumi had travelled himself. This was part of Dana and Nadim’s answer to the calls for greater representation and diversity in the West End.

At its London debut, Rumi: The Musical opened to a full house and spectacular reviews, as distinguished guests from the acting world’s most illustrious names to national arts and culture critics, journalists, and the public were left in awe of the story they witnessed unfold on stage.

Described by Dress Circle Antics as:

“A truly gorgeous musical, with music, lyrics and everything to match – a truly unforgettable theatrical experience,” Rumi: The Musical is produced by the acclaimed Ali Matar who joins highly-commended Director Bronagh Lagan in making this epic and moving musical come to life.

The legacy of Rumi has touched millions around the world over eight centuries and has inspired all nationalities, ages, faiths, and backgrounds alike. This powerful musical examines the transformative relationship between Rumi and his mentor Shams, and how this extraordinary friendship transitioned Rumi from a traditional scholar to a philosopher and poet.

The music is inspired by the global scale of Rumi’s outreach and a grand score combining Middle Eastern sounds with classical influences and Musical Theatre, with lyrics derived from Rumi’s poetry.

With international praise on its heels, Rumi: The Musical is ready to wow a home crowd. You can expect the audience to be filled with Qatar’s most prominent socialites, celebrities, and lovers of arts, culture, music, and theatre. With its deep-rooted story and range of artistic elements, the concert could not be debuting at a more fitting event in Doha than the annual D’reesha Festival.

Taking place at Oxygen Park - Education City, this annual seven-day festival, starting on December 11th, is a place where visitors can experience Arab and Islamic culture through Performance Arts, such as music, theatre, poetry, storytelling, and more, all in a family-friendly atmosphere. There will also be a Torba Farmers’ market where visitors can buy products, snacks, and coffee from local vendors.

“Qatar’s World Cup has been a unique experience for the world, one which bridged the gap and promoted unity and tolerance. It provided a platform for our voices to be heard and appreciated, as a Qatari Artist it is the greatest honour to bring my musical to my home country in this momentous occasion.”

Nadim Naaman, co-writer and one of the leading actors in the musical, said: “As Qatar invites the world to see that the Middle East can be a home for sporting success, I passionately wish for the Middle East to be seen as a thriving home for the arts, too.

“I’m hugely proud and excited for my co-writer Dana Al Fardan to be able to present this musical in her home nation, and hope that our audiences will find in it inspiration to explore music and theatre,” he continued. “And that the region as a whole will continue to recognise that, just as sport can, the arts can be a wonderful advertisement and unifying platform for the success and talent of a nation and its people.”

The powerful journey to discover the story of Rumi, whose legacy has inspired millions across the centuries and around the world, will feature a commanding 29-piece orchestra conducted by the show’s master’s in musical direction and supervision – husband and wife duo, Orchestrator and Arranger Joe Davison, and vocal arrangements specialist Nikki Davison.

The show features a grand score that combines Middle Eastern authenticity with classical influences and contemporary musical theatre, with lyrics derived from Rumi’s poetry. The team’s compelling work truly left a mark, as the Musical Theatre Review praised the show, saying: “The score hooks you straight from the start - you are transported to The Middle East where classical influences and musical theatre meet head on, in spectacular fashion.”

In aligning the integrity with which Rumi is synonymous, the musical celebrates Arabic heritage from the MENA region, connecting the centuries-old relationship that the Middle East and the West have shared through various aspects of arts, travel, fashion, migration, and third culture talents such as those who eloquently and passionately take Rumi: The Musical from rehearsals to exceptional live shows.

More than anything, the musical’s success is confirmation of the shift in the lens through which the world views the Middle East, allowing actors in the diaspora to take control of their heritage and cultural narratives and represent their own stories to dispel Western stereotypes of the MENA region.

The cast is led by co-creator Nadim Naaman who brings a wealth of theatre credits with him, including playing Raoul in Phantom of the Opera, Anthony in Sweeney Todd, and Prince Charming in Cinderella.

Theatre powerhouses Casey Al-Shaqsy, best known for Six the Musical, and Soophia Foroughi, who was in the original London cast of The Prince of Egypt, both starred as part of the leading company. They brought immense talent to the musicals in London. They return to their roles in Doha along with the rest of the cast, which includes Adam Bayjou, Yazdan Qafouri, Johan Munir and Hassun Sharif. There is also an ensemble featuring Eva-Theresa Chokarian, Danny Collins, Daniel Luiz, Zara Naeem, Aliza Vakil, Bethany Weaver, and Karishma Young.

Set and Costume Design for the charming musical are by Gregor Donnelly, with Lightning Design by Nic Farman, Sound Design by Simon Hendry and Video Design by Matt Powell.

“Elegant, powerful and evocative music,” as described by the London Theatre Review, Rumi: The Musical was an amalgamation of the best in the industry. The release of a full-length concept album on Broadway Records follows its world premiere.