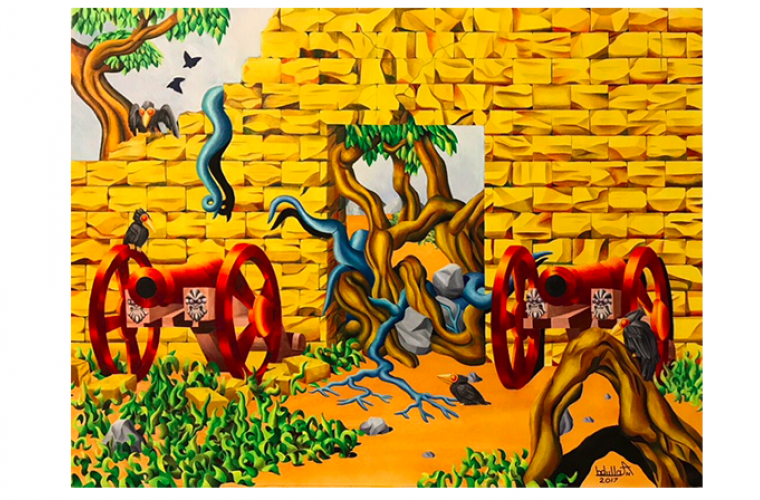 Following the successful completion of a prestigious residency programme at the renowned Cité internationale des Arts in Paris, Qatari artist Abdulla Al-Kuwari has opened a solo exhibition at the Fire Station to mark the occasion.

Held under the patronage of its Chairperson, Her Excellency Sheikha Al Mayassa bint Hamad bin Khalifa Al Thani, the Paris Residency is an extension of Qatar Museums’ (QM) Fire Station: Artist in Residence programme in Doha and takes one talented Qatari creative to Paris for a three-month stint.

Abdulla opened his exhibition at the Fire Station with a public talk, during which he shared insights from his journey and experience as a resident in Paris. Accompanying the talk, an exhibition showcased artworks produced as part of the residency in which Abdulla experiments with visuals that frequently appear in his pieces and speak to a colourful and dynamic imagination. The artworks merge the abstract and representational approaches, linking them together to explore concepts of contradiction and juxtaposition in a dream-like setting.

“Abdulla’s work continues to evolve and delight audiences with its unique aesthetic and I’m very excited the people of Doha have a chance to see for themselves the latest product of Abdulla’s time in Paris. The residency programme with the Cité internationale des Arts in Paris is a prestigious opportunity for talented local individuals to stretch their limits and collaborate with like-minded individuals from around the world and Abulla has fully taken on that challenge and opportunity by producing the exemplary creations we see at the Fire Station now.”

Abdulla is the third Qatari artist to have a chance to work in Paris through QM’s residency initiative, following two spectacular showings from Ebtisam Al Saffar and Nasser Al-Attiya who also hosted solo shows at the Fire Station in 2017.

Abdulla’s work explores spaces of ambiguity and fantasy, shifting between the real and the imagined. He is mainly inspired by nature, memories and pop culture. Abdulla received his BFA in Painting and Printmaking in 2014 from Virginia Commonwealth University in Doha, graduating with the Highest Honors. He has participated in exhibitions and art events in the Middle East, including Middle East Film & Comic Con 2016.

The Qatari Art Residency Programme is a recurring three-month residency open to all Qatari artists, and provides one talented individual with studio accommodation space and the chance to be fully immersed in Paris’ art and culture scene.

For more information about the Paris Residency, artists should visit: http://www.firestation.org.qa/paris-art-residency-2017