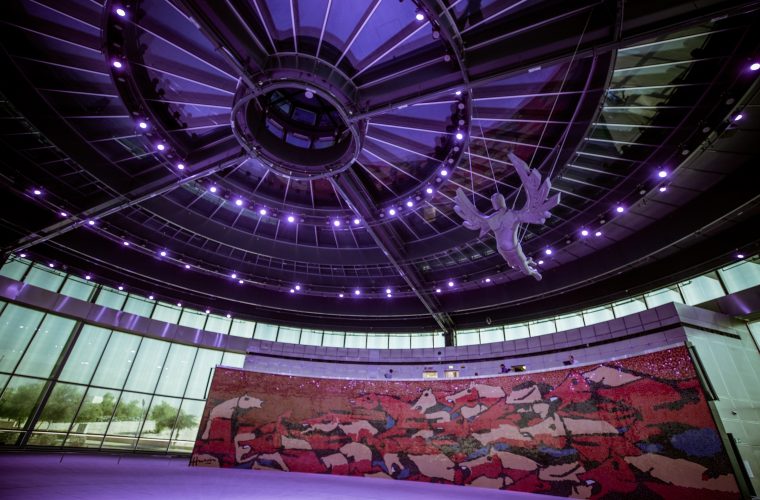 Just when his fans and critics thought that they had seen everything that Maqbool Fida Husain could possibly offer, he reappears. The artist’s latest installation, the Seeroo fi al Ardh, will soon be unveiled in Qatar Foundation’s Education City on 11 December.

It will be his final project. And it will also be his most unusual – Husain designed it to be an art installation that is both kinetic and experiential.

The Seeroo fi al Ardh is part of Husain’s extensive project on Arab civilization. The installation was commissioned by Her Highness Sheikha Moza bint Nasser, Chairperson of Qatar Foundation, in addition to a series of paintings that reflect the 99 names of Allah, the Merciful, the Compassionate. The artwork itself tells the story of the progression of human civilization through the history of the Arab region.

It touches on how people throughout the region used nature, and ultimately machines, to further their ambitions. And it highlights the fact that the enlightened mindset that sparks innovation and experimentation existed in the Arab world both before and during the European Renaissance.

Mrs. Machaille Al-Naimi, President of Community Development, Qatar Foundation said: “The artwork is a natural progression of QF’s efforts to help position Qatar as a hub for international art and culture. Additionally, this installation comes at a time when Qatar is celebrating the India-Qatar Year of Culture.

“This specific art installation does not just reflect the journey of Arab civilization; it is also representative of the openness and inclusivity of Qatar Foundation and Qatar. It sends an invitation to both residents and visitors to explore the country’s art and culture landscape and – like M F Husain – to be inspired by it.”

Following the unveiling, the installation will be housed in a permanent building near the Al Shaqab equestrian center within Education City, and will be open to the public.

Husain’s works have been exhibited throughout the world. His first exhibition in Qatar was held in 1984 at Doha’s Sheraton Hotel, with a further exhibition being held at the Museum of Islamic Art, over a decade ago.

Husain then took up residence in Qatar, and his close ties with the country were cemented when he was granted Qatari citizenship. An exhibition of the paintings that the artist created during his time in Qatar, titled Horses of The Sun, was held at Mathaf: Arab Museum of Modern Art, in Education City, earlier this year.