Mathaf celebrates history and art with a series of emotive exhibitions 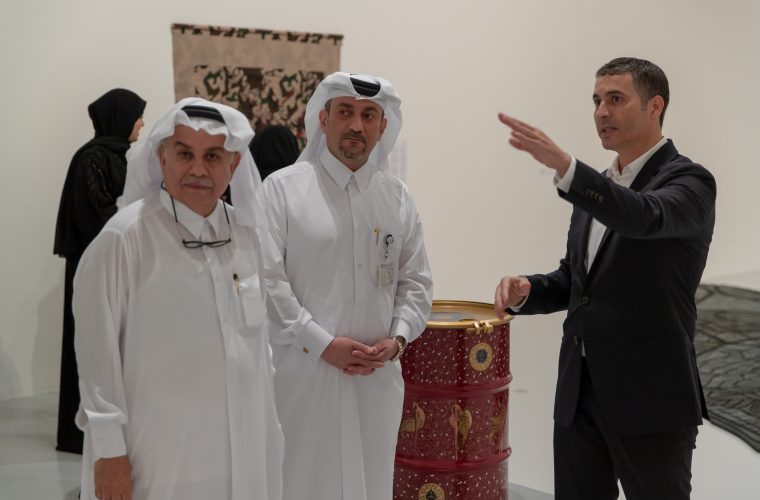 Mathaf: Arab Museum of Modern Art hosted the opening ceremony of its highly anticipated fall programme of exhibitions and displays. Open to the public from the 17th of October to 16th of February, the four exhibitions tackle a range of thought-provoking themes that span different generations and contexts.

The first exhibition, titled Revolution Generations, presents artists from the Arab World, Turkey, Iran and diaspora, looking at important moments of change in the history of modern and contemporary art; specifically the 1950s - 1960s Post-Independence(s) era; a period between 1970s - 1990s, and the 2000s pre-revolutions decades, when underground artistic movements developed in the region in response to the absence of freedom of expression.

Staged in three parts and curated by Mathaf Director, Abdellah Karroum, Revolution Generations begins by telling the story of the region’s fight for independence in the 1950s, where art was used to express new languages and thoughts. The exhibition then highlights the iconic Pan-Arab cultural movement of the 70s, where the region’s hopes and dreams were captured by the virtuosos of that era. The final chapter of the exhibition is an ode to a generation of artists who prefigured the Arab Spring in the 2000s, inventing new vocabularies that look at societies undergoing change.

“Revolution Generations is a historical narrative that celebrates a generation of artists that dared to go against the status quo and who were vital actors of cultural and social change in their respective surroundings. It looks at their lives, thoughts and the dreams that shaped their work,” commented Abdellah Karroum. “We chose these three chapters in the region’s history because they were iconic eras that are still influencing our lives to this day. Mathaf has always been a platform that amplifies thought-provoking voices and ideas and we hope that audiences can find inspirations in the layers of these stories.”

Works on show are drawn from the extensive collection of Mathaf, alongside loans from international public and private collections, and from artists and galleries.

In parallel, Mathaf will present the exhibition Mounira Al Solh, I strongly believe in our right to be frivolous, curated by Hendrik Folkerts (Dittmer Curator of Modern and Contemporary Art, the Art Institute of Chicago) and Laura Barlow (Curator, Mathaf: Arab Museum of Modern Art, Doha). In the series of drawings, ‘I strongly believe in our right to be frivolous’ (2012-ongoing), Mounira Al Solh (born 1978, Beirut, Lebanon) collects personal histories and experiences that emerge from the humanitarian and political crises in Syria and the Middle East. The more than 150 drawings and embroideries presented at Mathaf document deeply personal encounters and conversations between Al Solh and Syrian refugees as well as other people from the Middle East who were forcibly displaced to Lebanon, Europe, and the United States, chronicling individual accounts of departure, arrival, and grave uncertainty. Just as these works emerge from spaces of conversation and exile around the world, this exhibition, now presented in Doha, becomes a stage for conversation—inspiring viewers to reflect on and discuss how migration and displacement, conflict and resistance, continue to shape the world today.

“I started inviting people over to my studio, to welcome them in my own medium, drawing their amazing faces that carried so much strength and resilience. After six years of continuing this work, I am more aware of how faces tell a story that is as powerful as each person’s story, their ideas about life, aspirations, and how we can go on, wherever we have ended up,” said Mounira Al Solh.

“Mounira Al Solh's exhibition emerges from spaces of conversation in Lebanon, cities in Europe and in Chicago. As such, the exhibition becomes the stage for conversation. These works inspire us to reflect on and discuss how migration and displacement, conflict and hope, and diasporic relations to the notion of home shape our world today,” said Hendrik Folkerts.

For her part, Laura Barlow commented, “Mathaf is committed to showing the work of artists who are witnesses to their time and context, and who tackle socio-political issues in their work. The presentation of Mounira Al Solh’s project “I strongly believe in our right to be frivolous” at Mathaf brings this project to the region for the first time, expanding the engagement with Al Solh’s drawings and embroideries that reflect so powerfully on the humanitarian impact of the Syrian war.”

Fateh al-Moudarres: Colour, Extensity and Sense, guest curated by Sara Raza (Independent Curator), presents a posthumous view into the oeuvre of this modernist artist’s studio practice. Deliberately organized as a thematic slice, as opposed to a retrospective, this exhibition provides a revisionist lens, which examines al-Moudaress’s works within the context of his engagements with Surrealism and Sufism.

“Fateh al-Moudarres’ is one of the pioneers of modern art movements in Syria. His works are deeply rooted in the region, taking inspiration from not only his surroundings but from personal experiences that shaped his life,” said Sara Raza. “This specific exhibition tackles a period of his life that saw him getting immersed in surrealist art, later becoming a master in the genre.”

Commenting on the exhibition, Fatma Mostafawi stated: "Jassim Zaini comes from a generation of Qatari artists who lived through a fundamental era and encountered changes in the country’s social, cultural and economic landscape, primarily brought by the building of a modern state and the establishment of an oil industry. His commentary on these changes is a fascinating look at a society that stood at the cusp of a major transformation.”

Under the leadership of its Chairperson, Her Excellency Sheikha Al Mayassa bint Hamad bin Khalifa Al Thani, Mathaf organises major exhibitions, both historical and experimental, and large-scale education programmes, performing an important role as a centre for dialogue, research, and a resource for fostering creativity.