Made in Qatar winners get awards at Ajyal Fest 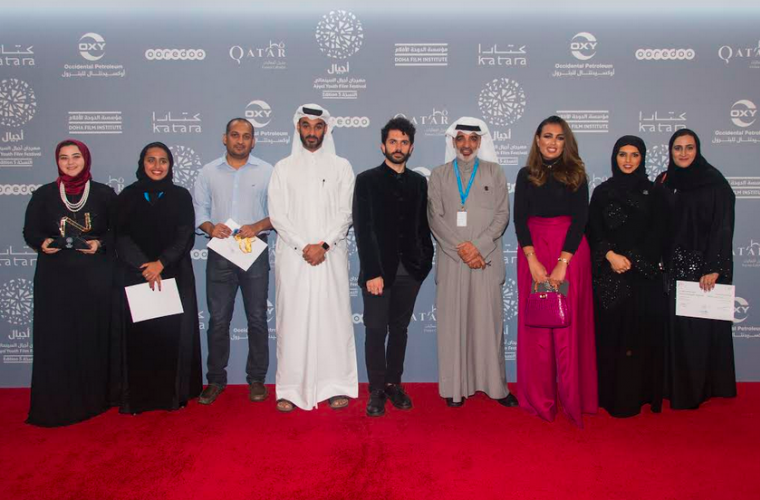 After careful deliberation, Ajyal Youth Film Festival’s Made in Qatar jury reached their final decisions on the sixteen entries in this year’s programme. The winning films, which are all locally-made, were officially announced at a ceremony following last night’s screening of the second Made in Qatar programme, presented by Occidental Petroleum Qatar.

The three judges, all industry professionals, Salah Al Mulla, a prominent actor from Qatar, Ely Dagher, a cross-media artist from Lebanon, and Dana Mado, a public relations and strategic marketing executive from Kuwait, released an official statement alongside the names, praising the quality of this year’s entries.

The Best Narrative Award went to Amal al-Muftah’s Smicha (Qatar/2017), which tells the heart-warming story of the bond between a seven-year-old girl, Lulwa, and her elderly grandfather, who is beginning to show signs of senility.

“The jury chose Smicha as the Best Narrative film for the heart-touching and different way it deals with love and care,” they said.

The Best Documentary/Experimental Award went to Rawan Al-Nassiri and Nada Bedair’s Treasures of the Past (Qatar/2017) which follows three cheerful, engaging and hard-working Qatari grandmothers, who have spent their lives in service to their families, bringing to mind the adage that a woman’s work is never done.

Explaining their choice, the jury said: “The film broke the stereotypical image of women of this period and highlighted their involvement in occupations that have almost died out. The characters were very proud and positive and had a sense of humour and the film presented feminism in a new and bold light.”

For the first time, the Special Jury Narrative Award was a tie between Aisha al-Jaidah’s 1001 Days (Qatar/2017), an animated film that explores the story behind the story of the famous 1001 Nights, addressing eternal issues like sacrifice, equality and bravery and Nibu Vasudevan’s Walls (Qatar/2017), a CG animation in which a race of skeleton-like, robotic creatures are engaged in a pointless, seemingly endless war with an unseen enemy.

The Special Jury Documentary/Experimental Award went to Rawda Al-Thani’s I Have Been Watching You All Along (Qatar/2017), in which a girl explores an abandoned cinema and through a trancelike journey into its past through the celluloid clips she finds, creates a freeform narrative of her own, breathing new life into forgotten artefacts.

Presented by Occidental Petroleum Qatar, Made in Qatar’s sixteen short films, a mix of animations, film and documentary, were shown in two programmes and demonstrate the sophistication and growing confidence and reach of Qatar’s diverse film community.

During the ceremony, the Doha Film Institute announced the new National Films Competition. Launched in the spirit of National Day and mindful of the circumstances facing the state of Qatar, the competition is for the best short film inspired by the latest speeches of H.H Sheikh Tamim Ben Hamad Al Thani, the Emir of Qatar. Eligible to all people living in Qatar, applicants can submit their 30 sec – 1 minute videos on www.dohafilminstitute.com. Deadline for submission is 16 December 2017. A jury will select the five best submissions, two of which will receive awards on National Day.

If you have anything you want to share with us, send us an e-mail at c[email protected]!