[UPDATED] KAWS HOLIDAY is the talk of Qatar right now! 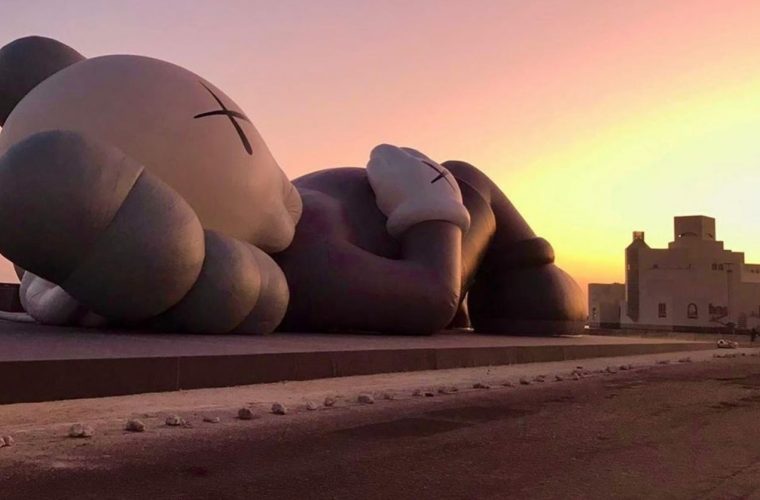 Following the opening of KAWS: HE EATS ALONE at the Fire Station just recently, Qatar Museums (QM) unveiled HOLIDAY, an installation by US born artist, Brian Donnelly – known as KAWS. The work, currently situated at the Dhow Harbour, is on display for the first time in the Middle East and joins Qatar’s growing portfolio of permanent and temporary public art pieces.

HOLIDAY by KAWS is Qatar’s latest public art installation, and though it’s only on display till 17 November 2019 (date changed to 20 November 2019), it has surely caught the eye of everyone who lives in Qatar from Her Excellency Sheikha Al Mayassa bint Hamad Al Thani, chairperson of Qatar Museums and sister of His Highness The Amir Sheikh Tamim bin Hamad Al Thani, to Fahad Al Badar, the Qatar’ climber who scaled Mount Everest and other, from the Supreme Committee of Delivery and Legacy to the GWC Logistics, to the general public of Qatar. Everyone is flocking to see this magnificent 40 metre long inflatable structure that shows KAWS character COMPANION lying back. This must-see sculpture represents the artist’s attempt to remind passersby to relax in an increasingly hectic world. Much like the rest of KAWS’ body of work, the installation uses wit and irreverence to provide a playful commentary on our humanity.

The installation in Doha is the most recent iteration of the touring KAWS: HOLIDAY project after previous displays in some of the world’s most important cultural hotspots that include the city of Seoul in South Korea and Mount Fuji in Japan. Located at the heart of Qatar’s cultural square, which is close to popular destinations such as the Museum of Islamic Art, the National Museum of Qatar and Souq Waqif, the Dhow Harbour is the ideal location to host such a show-stopping piece in Qatar.

KAWS is a New York-based world-renowned artist whose iconic signature “XX” finds its roots in the time when KAWS was just starting out as a street artist in the 1990s. It was then that he began playing with advertisements and altering them with his artistic talent using the “XX” sign in places of the eyes, and went on to create the highly popular COMPANION character with gloved hands and two "XXs"for eyes. KAWS’ artistic endeavours have long possessed a sophisticated, dark humor, revealing the interplay between art and consumerism, referencing both art history and pop culture to, often, create a hybrid of human and cartoon characters like Mickey Mouse which was one of KAWS most famous sculptures and shows the famous Disney character with his hands covering his eyes.

Though many people may not know the artist himself, everyone who travels through Qatar, has seen his recent installation called KAWS’s SMALL LIE (2018) at Doha’s Hamad International Airport. KAWS’ larger-than-life sculptures, which evoke questions of humanity and hope, will unquestionably resonate with the people of Qatar when they come to see his artistic body of works at the Doha Fire Station’s Garage Gallery. While KAWS HOLIDAY will remain on display only until 17 November (date changed to 20 November), the artist’s exhibition KAWS: HE EATS ALONE, curated by acclaimed art historian Germano Celant is on till 20 January 2020.

For more information about the KAWS: HE EATS ALONE EXHIBITION at the Doha Fire Station and the artist behind the artworks, click on the following link: https://www.iloveqatar.net/news/artsCulture/kaws-he-eats-alone-is-qatars-newest-must-see-exhibition