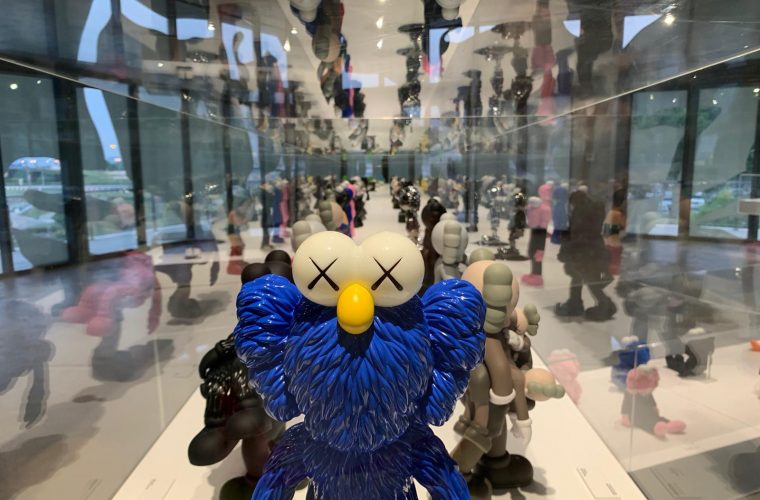 The KAWS: HE EATS ALONE exhibition dates remain the same.

The KAWS: HE EATS ALONE exhibition is now open at the Doha Fire Station’s Garage Gallery. This colourful one-of-its-kind exhibition was inaugurated by His Excellency Sheikh Thani bin Hamad bin Khalifa Al-Thani, and is the first museum show by Brian Donnelly, known professionally as KAWS, in the Middle East.

KAWS is a New York-based world-renowned artist whose iconic signature “XX” finds its roots in the time when KAWS was just starting out as a street artist in the 1990s. It was then that he began playing with advertisements and altering them with his artistic talent using the “XX” sign in places of the eyes, and went on to create the highly popular COMPANION character with gloved hands and two "XXs"for eyes. KAWS’ artistic endeavours have long possessed a sophisticated, dark humor, revealing the interplay between art and consumerism, referencing both art history and pop culture to, often, create a hybrid of human and cartoon characters like Mickey Mouse which was one of KAWS most famous sculptures and shows the famous disney character with his hands covering his eyes.

Curated by acclaimed art historian Germano Celant, this solo survey showcased as an exhibition in Doha explores the artist’s career and vast oeuvre, featuring paintings, graphic design, small-scale objects, and large-scale sculptures that he has made over the past 20 years.

Though many people may not know the artist himself, everyone who travels through Qatar, has seen his recent installation called KAWS’s SMALL LIE (2018) at Doha’s Hamad International Airport. KAWS’ larger-than-life sculptures, which evoke questions of humanity and hope, will unquestionably resonate with the people of Qatar when they come to see his work at the Doha Fire Station.

The exhibition which will run until 25 January 2020 showcases 40 artworks by KAWS and represents the artist’s studio practice on view at the Garage Gallery along with a monumental (40-meter long) inflatable sculpture titled HOLIDAY (2019) which has been installed in the Dhow Harbour on the Corniche in Doha. Some 90 examples of products and commercial collaborations designed by KAWS which include sneakers, skateboards, and toys are also being presented in the Archive which is located on the second floor of the Doha Fire Station’s Café building.

KAWS has explored industrial production with KAWS COMPANION, CHUM, and ACCOMPLICE. These large- and small-scale objects translate the noisy exuberance of graffiti into 3-D cartoon characters that recall familiar images and characters in pop culture. By doing so, the artist is simultaneously representing the vacuity of media and, as a consumable product, the failure of art—a failure to change the world. Blindly, with Xs for eyes, these characters approach their audience with recognizable yet manipulated shapes, mutating in attempt to more easily interact with society. The formidable power of these hybrid figures, when cast as larger-than-life sculptures, speaks to a contemporary era in which image is often exchanged for persona—while their emotional stances are imbued with humanity.

The KAWS in Doha exhibition presents itself as large scale, artist-produced graphic installations that envelop the Fire Station and invite visitors into the singular world of KAWS. The museum’s Garage Gallery has been transformed into a labyrinthine of gallery spaces designed by New York-based studio 2x4. A composition of fragmented art walls and sculpture platforms serve to both anchor and frame the works throughout the exhibition, including the titular piece HE EATS ALONE (2014), an early painting M2 (2000), signature character sculpture CHUM (2008, black) and ACCOMPLICE (2010).

Across the courtyard, the Archive features a wide array of smaller KAWS objects in a series of intimately scaled, display vitrines. The KAWS editions from 1999 to 2019 on view range from fashion and design objects to plush toys and skateboards produced in collaboration with diverse companies and brands.

In the Fire Station’s courtyard space, the work COMPANION (PASSING THROUGH) (2010), a 5-meter-tall matte black figure, seated with his hands covering his eyes, will be installed. The COMPANION figure, which was created by KAWS in 1999 and represented one of the artist’s first characters in 3D, is likewise the subject of the large-scale inflatable, titled HOLIDAY (2019), to be installed in Doha’s Dhow Harbour. The 40-meter-long figure, in this iteration in a reclined position, was installed earlier this year on a campground at the base of Mount Fuji in Japan.

KAWS is not just a sculptor and painter, he is also a product designer and an avid collector. Many feel he is one of the most unique artists of the present time. His art style is contemporary, and yet he is able to bring the young and the old together no matter where they are through his interesting art that possesses a sophisticated, dark humor, revealing the interplay between art and consumerism, referencing both art history and pop culture.

KAWS, or Brian Donnelly, was born in New Jersey in 1974. After he was granted a Bachelor of Fine Arts in illustration from the New York School of Visual Arts in 1996, he got a job with Disney where he painted movie backgrounds and made valuable contributions to movies like Doug, Daria and 101 Dalmations.

After he became a street artist and started to reinvent print advertising campaigns, he started to get noticed and with time, he became increasingly popular. Since then, he has designed and produced vinyl toys, designed clothing and toys for famous brands like Vans, Nike, A Bathing Ape, Original Fake, Comme des Garcons and Kung Faux. He has recently collaborated with UniQlo and featured in the Dior Homme spring/summer 2019 runway show last June.

He is an increasingly popular contemporary artist that has made sculptures and public art installations like the HOLIDAY which can be seen at the Dhow Harbour on the Doha Corniche till 17 November 2019 (date extended to 20 November). The colossal 40 metre long sculpture represents the artist’s attempt to remind passersby to relax in an increasingly hectic world. Much like the rest of KAWS’ art, the installation uses wit and irreverence to provide a playful commentary on our humanity.

For more information about the KAWS HOLIDAY public art installation on display (till 20 November, 2019) at the Corniche Dhow Harbour, click on the following link: https://www.iloveqatar.net/news/artsCulture/kaws-holiday-is-the-talk-of-qatar-right-now

Admission to the exhibition

Admission to KAWS: HE EATS ALONE is QAR 50 for adults; QAR 25 for Qataris, Residents of Qatar and students. Admission is free for children under 16, Culture Pass Plus and Culture Pass Family Members, and visitors with disabilities. For full terms and conditions, visit: https://www.qm.org.qa/en/ticketing-terms-conditions