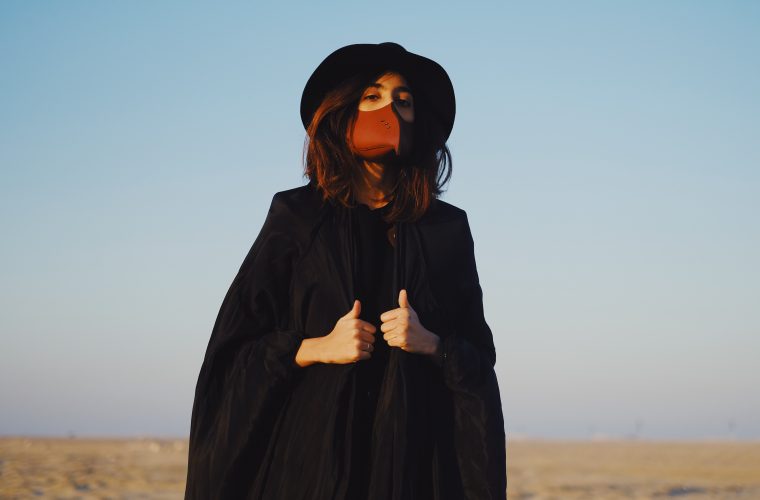 It’s a Monday night after iftar and I’m heading to the Doha Fire station to meet with local artist Fatima Mohammed. After meeting her in the courtyard, she takes me up to her studio which is filled with paintings, sculptures, prints and photos and magazine covers taped to the walls for inspiration. It smells of oil colours, acrylics and a thousand other unidentifiable materials.

Fatima Mohammed just graduated in May 2016 and has already taken the art scene by storm. With shows in Qatar, in the States, Scotland and London, she seems to conquer what she sets her mind to. In Qatar, Fatima explored her national, cultural and gender identity using art and found herself breaking rules in art and social barriers. As a woman of ethnic minority she tells us about art as her medium for female empowerment. Check out her why she is the new artist you MUST know about!

How would you describe your work as an artist?

My work is multi-media and it’s always changing. I don’t think I limit myself to one style, but one thing I will always have in my art is my beaks.

What can your art tell us about you and your identity?

I think my art can tell you a lot about myself, because it shows that I come from a mixed background and the Western influence on me, having been in an American school. My character has a beak, which is half American bald eagle, symbolizing American influence, and half Khaleeji, representing the heritage of the Gulf.

And what does the batoula mean to you and where do we find your world of Anaj?

The batoula reminds me of all the old ladies we used to see as kids in Qatar. And there is a story about the first female driver, who was wearing a batoula while driving and it was quite a rebellious thing to do. So I was inspired by her. And my Anaj started as a way of me building a character, my alter ego, in which I could express myself freely without any boundaries. Because it’s not an actual person but combines everyone into one character, she cannot be defined.

Interesting! And as an artist, where do you draw your inspiration from?

I get my inspiration from society, from what’s happening around me, and living in a fast growing country with things changing drastically in the past 16 years. Mostly my art focuses on pop culture, the way we dress and express ourselves through our bodies, and how pop music influences us. I also focus on the influence of colonialism here. I remember in school, we weren’t allowed to speak in Arabic and we would get detention for speaking it. So then not being able to speak your native language creates problems for your identity. That’s how my character of Anaj started.

Being female and Qatari, what purpose do you feel your art has?

I think as a woman, my character is empowering. She doesn’t believe in rules, she fights for what she believes in and says what she wants. She doesn’t let other people define who she is and what she does. And I think that goes along with what we see now; women being stronger, and different movements to support women. It’s a time of the female power!

What role do you think does art play in general in Qatar and Qatari society?

Art is growing in Qatar. Before, the art scene wasn’t very big and there were only a few artists, like Ali Hassan. Now art is growing, and especially after the blockade, people are turning more towards art and I think it’s playing an important role right now. It definitely has more meaning to people.

So would you say art is a form of resistance?

Yeah, or it’s a way to speak your mind because there are not limits in art, no boundaries.

You have frequently explored social life and society in the Khaleej. Do you see social change in Qatar through art?

I feel art does evoke change. Before when I was doing performance art, people didn’t understand it, but slowly people become more accepting. So I think people are changing. Drawing figures before was something wrong, but now it’s something very normal. People are evolving with art.

Can you tell us a little bit about your previous exhibits?

I had one in London last summer with Reconnecting Art, where I showed a painting of my grandmother, my father marking the beginning of the change when petrol was discovered in Qatar. Everything started changing from then on. You can see the evolution of that area from a pearl diving community to an oil industry. This exhibit, together with a group show in Aberdeen, Scotland and the ones I had in Doha have received very positive feedback.

Amazing! Which project(s) are you most proud of?

My favourite painting would have to be the one with my grandmother and my father (image below), because the painting has a very deep meaning to me, it’s very personal to me.

And what was the most challenging?

I think trying to stick to one medium will always be challenging to me, because I like to mix stuff and I like break rules while painting.

What kind of rules have you broken in painting?

Mixing oil with acrylic, using material that are not supposed to be painted on like asphalt. I like to understand the material I’m using. Like asphalt is an oil based product but it doesn’t mix with oil, it works better with acrylics, which is contradictory.

How has the experience been in the Doha Fire Station program so far?

It’s really good. You learn a lot, it’s an amazing space, you meet a lot of artists and get to know them. It becomes like a second family. It helped me produce more work than I’d usually do. And I think the Firestation program is a very good opportunity for any up-and-coming artists, because you get exposed to a different world and different people.

So is there a lot of collaboration happening between artists or influencing one another?

I think people are influencing each other a lot. Some are collaborating, maybe planning group shows together in the future. You’re making good connections with people.

What can we anticipate from you this year?

I have the upcoming show in July with the Firestation, and I am also part of the 50 by 50 with Al Markhiya Gallery. There is also a possible show in Chicago with RUWAD Qatar.

Great! And what is your final message to people and artists in Qatar and elsewhere?

To follow their passion, and to not let anyone stop them from doing what they love!

Thank you very much Fatima for letting ILQ take a sneak peak into your world and sharing your vision with us!

The pictures throughout the article are a little teaser for her upcoming show Artists in Residence at Doha Fire station. We at ILQ cannot wait for the opening in July and hope Fatima will continue to empower us with her art!

Let us know what you think about this thought provoking interview! Also don’t forget to give us a like and a share – you know it keeps us going!