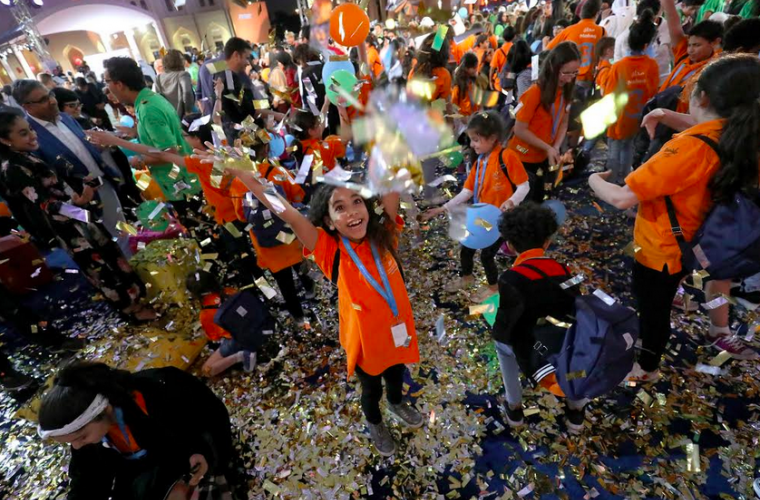 The fifth Ajyal Youth Film Festival presented by the Doha Film Institute announced the winners of its Ajyal Competition, voted by Ajyal Jurors in three categories – Mohaq (jurors aged 8 to 12), Hilal (voters aged 13 to 17) and Bader (voters aged 18 to 21).

The winners were honoured at the closing night ceremony that was followed by the screening of Loving Vincent (Poland, UK, Qatar), a co-production by the Doha Film Institute, and directed by Dorota Kobiela and Hugh Welchman. The film also won this year’s Audience Award.

The closing ceremony also included a special screening of musical project film Summer Cloud directed by Ali Al-Tayeb and Mohammed Sharif and demonstrates the unity and solidarity of Qatar’s vibrant nation and how traditions and heritage are deeply rooted in their daily lives.

The winner of the Bariq Award, which is given by the youngest festivalgoers, children aged under eight, was Little Bird and the Caterpillar (Switzerland/2017), a whimsical animation about adversaries becoming friends in which a little bird tending to the leaves on a nearby branch is confronted by a pesky caterpillar that eats all the buds.

Jurors voted on their preferred name for the recently unveiled mascot of the Ajyal Youth Film Festival. Named ‘Shehab’, the falcon-like character embodies Ajyal’s five values of curiosity, empowerment, film, friendship and joy, and will represent future editions of the festival.

Earlier, the festival also awarded the winners in the Made in Qatar programme, presented by Occidental Petroleum Qatar, that included 16 films by Qatari directors and those who call Qatar home. The winners were:

The Mohaq ‘Best Film’ winner, Joachim Dollhopf and Evi Goldbrunner’s At Eye Level tells the story of ten-year-old Michi, who has grown up without a father. After his mother dies, Michi finds an unsent letter announcing her pregnancy, addressed to a man called ‘Tom’ but when father and son are reunited, Tom isn’t exactly the person Michi imagined him to be.

The Breadwinner, the opening film of the fifth Ajyal Youth Film Festival, directed by Nora Twomey and executive produced by Angelina Jolie, is an animated Afghan tale that puts a young girl's will and determination in the spotlight. The film is based on the best-selling novel by Deborah Ellis and tells the story of Parvana, an 11-year-old girl who resorts to creative means so she can work to support her mother and sister, after her father is unjustly arrested. Thirteen year-old actress Saara Chaudry, voice of the main character, Parvana, attended the opening night ceremony.

Sing is the story of little girl unfairly told by her teacher that she cannot sing and Mare Nostrum explores the reasons why a Syrian man finds himself with no choice but to put his daughter’s life at risk. All of Us deals with a real incident in 2015, when Al-Shabab terrorists attacked a bus of Kenyan travellers. Muslim passengers protected their Christian countrymen by refusing to identify them to the terrorists.

This year, the Festival once again featured the Ajyal Talks, a series of open discussions about real, globally relevant issues and the power that film can have in increasing awareness. Subjects included child trafficking, the way media influences perceptions and the power of art in overcoming adversity, and concluded with a special conversation with visual artist Shirin Neshat.

The 5th Ajyal Youth Film Festival was held from November 29 to December 4. The largest to date, it screened 103 films from 43 countries, including 20 feature films and 83 short films, illustrating the ability of storytelling to transcend borders, transform minds and touch hearts. The films demonstrated the power of cinema to stimulate discussions about real, globally relevant issues and the resilience of creativity.

The fifth Ajyal Youth Film Festival also featured the SONY Cinema Under the Stars, Special Screenings, Family Weekend activities, Geekdom, a festival of all things pop culture and LeBlockade, a multimedia exhibition of work created in response to the blockade.

Katara Cultural Village was the Cultural Partner of the Ajyal Youth Film Festival; Qatar Tourism Authority was the Strategic Partner, and Occidental Petroleum Corporation and Ooredoo were the Principal Partners.