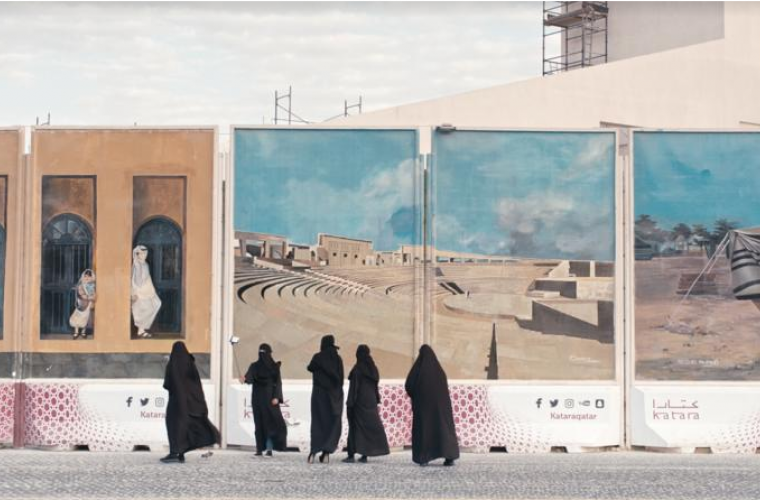 The Ajyal Film Festival competition, this year, will showcase 33 shorts from over 18 countries, including eight ‘Made in Qatar’, which present fascinating new expressions in cinema, cutting across genres, narrative styles and themes.

From the first hand-drawn animated film to be produced by DreamWorks Animation since over 15 years to searing tales from the region as well as inspiring ones on hope, resilience and courage, the short films will be evaluated by the young Ajyal Jurors in each of the three categories.
The Ajyal Film Festival competition, which honours the Best Film in each category, is central to the annual cinema event hosted by the Doha Film Institute to be held this year from November 28 to December 3 at Katara Cultural Village.

Fatma Hassan Alremaihi, Festival Director and Chief Executive Officer of the Doha Film Institute, said: “The diversity of the short films in our competition section highlights the bold new faces of emerging cinema, with talented young people pushing the boundaries of storytelling techniques. The films selected reflect the themes of the festival that celebrates the values of courage, hope and resilience. In each of the short films, a genre that requires a strong command over the medium, the filmmakers present insights that will surely inspire audiences to reflect on their own lives, communities and the world in ways they may not have done before. We are confident that the short films, including a proud showcase of national films made by Qatari talents, will resonate with our audiences and jurors alike.”
Jurors aged 8 to 12 will watch and discuss films under the Mohaq category which has 12 short films this year, while Hilal Jurors aged 13 to 17 will watch 10 short films. The Bader Jurors, aged 18 to 21, will evaluate 11 shorts. The directors of the Best Film will receive funding support for their next film.

Mohaq Category
The short films in the Mohaq category are: • Antouni (Armenia, USA/2017), by Alik Tamar, about a Syrian-Armenian girl, who is travelling on a bus with her father. She believes he is taking her on a summer holiday but learns from the driver that something else is afoot.
• Bachir in Wonderland (Netherlands/2017) by Evelien Vehof and Els Duran about a boy living in the Sahara Desert, who gets the chance to experience a very different way of life
• Gubgub (Qatar/2018) by Nouf Al Sulaiti, about an adventurous young girl who goes crab-hunting with her family. Discouraged when her father undervalues her accomplishments compared to her brother’s, she sets out to win his approval.
• Gummy Gas Crisis (Argentina/2017) by Rodrigo Díaz, a retro video game adventure, in which Lord Gasideous wants to bully everyone by spreading his smelly gas all over the city. Can space hero Ed be able to stop him in time?
• Nasser Goes to Space (Qatar/2018) by Mohamed Al Mahmeed, about Nasser, a highly creative seven-year-old boy who copes with his parents’ divorce by escaping to a magical place he has created in his mind.
• Odd is an Egg (Norway, Portugal/2016) by Kristin Ulseth, in which Odd is so worried about cracking his fragile egg head that his entire life has come to a standstill. Then one day he meets Gunn, who helps him break out of his shell.
• Post No Bills (Canada/2017) by Robin Hays, an imaginative short film in which the characters featured in a wall of posters come to life and must work together to avoid being painted over by the city's clean-up crew.
• Sh’hab (Qatar/2018) by Amal Al-Muftah, in which, upon hearing a myth about falling stars, a young girl’s curiosity is sparked. When night falls, she sets out in her father’s boat to find some.
• Siblings (Canada/2016) by James Michael Chiang, where children share their experiences with prejudice, perception, discrimination, everyday life, and the love they have for their siblings in a series of candid interviews. • The Elephant’s Song (USA/2018) by Lynn Tomlinson, which tells the true and tragic tale of Old Bet, the first circus elephant in America, as recounted in song by her friend the old farm dog.
• Two Balloons (USA/2017) by Mark C. Smith, a film about two adventurous lemurs that navigate their airships across the beautiful sky to meet each other as agreed. But their plan is suddenly disrupted by an approaching storm.
• Two Trams (Russia/2017) by Svetlana Andrianova in which two city trams roam the streets of a bustling city, with the older and wiser one keeping the younger one out of danger.

Hilal Category
The short films in the Hilal category are: • As My Father Was (Iraq/2018) by Muslim Habeeb, in which, marginalised by society due to his ethnic background and disability, a 12-year-old boy struggles to find a school.
• Bird Karma (USA/2018) by William Salazar, is the first hand-drawn animated film to be produced by DreamWorks Animation since 2003, in which a leggy bird discovers that sometimes you get as good as you give.
• Changyou’s Journey (USA/2017) by Perry Chen; a young animator crafted this labour of love to inspire his father during his long battle with cancer, and to pay tribute to the life he led in rural China.
• Drop by Drop (Portugal/2017) by Alexandra Ramires (Xá) and Laura Goncalves, which is based on real-life interviews; this short is record of the last inhabitants of a dying village as they ponder the fate of their home and the legacy they leave behind.
• Killing Hope (France/2017) by Julia Retali and Natacha Grangeon, which is set in the midst of the tragic civil war in Syria, where Al-Basha stands for something bigger than himself: he is the last clown of Aleppo.
• Last Stop is the Moon (Poland, Lithuania/2017) by Birutė Sodeikaite, which is the story of a young who is coming to terms with an illness. By imagining her sickness as a lion and herself as a unicorn, she voyages through the different stages of acceptance.
• Millennials (Qatar/2017) by Aisha Al-Shammakh, about six people from the ‘millennials’ generation; while they come from different backgrounds, they share the same digital experience. • One in 50 Million (Qatar/2018) by Luciana Ceccatto Farah, about Nawaal Akram, who suffers from an extremely rare condition but does not let it prevent her from living a full life as a cosplayer, comedian and disability rights activist. • Radiance (USA/2017) by Chialing Yang, a short, semi-autobiographical animation that uses a hand-drawn style to tell the story of a young girl who is coping with the loss of her much-beloved grandmother.
• Sirocco (France/2016) by Romain Garcia, Kevin Tarpinian, Thomas Lopez-Massy, Avril Hug, and Lauren Madec, in which at the edge of the Sicilian coast, a family gathers to celebrate the birthday of a godfather. But the party doesn’t go quite to plan.

Bader Category
The short films in the Bader category are: • Amphitheater (Qatar/2018) by Mahdi Ali Ali, in which Sarah, a professional Qatari photographer, visits Katara and happens upon a rebellious young girl and her family. • Brotherhood (Tunisia, Canada, Sweden, Qatar/2018) by Meryam Joobeur, about Malik, an 18-year-old with flaming red hair, who returns to his small village in Tunisia after fighting in Syria and must confront a complicated relationship with his father.
• Carlotta’s Face (Germany/2018) by Valentin Riedl and Frédéric Schuldi about Carlotta, who looks in the mirror but doesn't recognise herself. She suffers from ‘Face Blindness’, a rare condition, but art has allowed her to explore the world anew.
• Commodity City (China, USA/2016) by Jessica Kingdon, a documentary exploring the daily lives of vendors who work in the largest wholesale consumer market in the world.
• I Don’t Believe In You But Then There is Gravity (Turkey/2018) by Umut Subaşı, which is a comedic look at the daily lives of the residents of a high-rise building, as their typical Sunday musings are overshadowed by an unexpected event.
• Inanimate (UK/2018) by Lucia Bulgheroni, about Katrine, who lives an ordinary life, with a regular job, in a typical city. Or at least that’s what she thinks until one day everything starts falling apart - literally!
• Negative Space (France/2017) by Ru Kuwahata and Max Porter, about a father who is often away on business trips but is able to connect with his son by teaching him the meticulous art of packing a suitcase.
• The Bleaching Syndrome (Qatar/2018) by Eiman Mirghani, which is a heartfelt and personal look into the troubling industry of skin lightening cosmetic products, and why some people feel social pressure to use them.
• The Craft (Kuwait, Lebanon/2017) by Monira Al Qadiri, a semi-autobiographical work of science fiction that unearths the unlikely stories of the artist’s childhood in Kuwait.
• The Reason, July 2017 (Qatar/2017) by Hadeer Omar, is about an artist, who takes a day trip that inspires her to draw. Her intricate illustrations flow and merge with memories from back home in Egypt and Qatar.
• Transformation (Kuwait/2017) by Yousef Al-Baqshi, about a young disabled man who lives with his mother, and struggles to come to terms with his limitations. A devastating war erupts, and this only amplifies his feelings of helplessness.