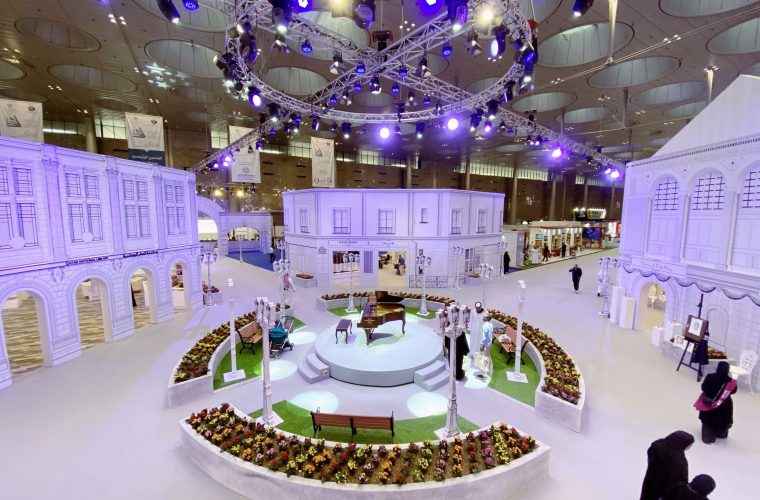 The Doha International Book Fair has begun! The event most awaited by book lovers is on its 30th edition with the theme, "Do you then not ponder?". According to the Minister of Culture and Sports, "This new edition comes to reinforce raising societal awareness, giving science its central role in defining human behavior, by motivating thinking abilities. Also to enlighten minds with what they need from the perceptions that can change the human lifestyle to better, and renew the civilized contribution based on respecting the diversity between peoples’ cultures."

This year, 335 publishing houses are participating, 228 of which are Arabic publishing houses and a total of 797 pavilions on 29,000 square meters! From the ancient books on display to the newest releases, there's something for everyone. And there's even book vending machines where you can buy children's books for very affordable prices.

While we all know that books are the spotlight in this event, here are a few more interesting reasons to check out at the 30th edition of the Doha International Book Fair!

1. The French Enlightenment! A heritage for the future

France is this year's Guest of Honour, in the framework of Qatar-France Cultural Year 2020, and they are paying tribute to the 'Enlightenment Age' in the book fair.

The French culture was all around the main plaza, recreating the historic Parisian scene as depicted in the look of the booths, cafes, and shops until the Main Theatre.

But the highlight from the French pavilion is Histovery's Augmented Visit of the Conciergerie (a Parisian monument) that allows guests to see what the Gothic rooms looked like during the Middle Ages and the French Revolution through the Histopad.

Also on the schedule are a series of talks by authors and selected personalities. There will be book signings after the talks of Anaïs Halard and Bastien Quignon, authors of “Sacha Tomcrouz", comic books for kids, and Slimane Zeghidour, war reporter and journalist at TV5 Monde.

2. Exciting activities for the kids

Indeed, the love of learning and books must be cultivated at an early age and the book fair has a lot in store to encourage that. On the side of the exhibition center (Hall 1) is a whole area dedicated to children.

There are 72 publishing houses for children, stalls selling educational toys, a puppet space, and even a Qatar school dedicated to children's activities. Other pavilions also feature various kids' activities such as fun science experiments by Nutty Scientists (Europe's leading provider of interactive science activities for children) and Al Araby where kids can learn how to be journalists.

Aside from literature, visual arts was also given importance in this event, with various art workshops lined up throughout the 10-day event. Guests are able to witness artists in action while they are painting or making pottery at the main plaza and at the dining area at Hall 5.

Music, art, and literature are often intertwined, formed by the creative side of our brain. The organizers have made sure that there is music involved, with guests delighted by various musical performances in the plaza, at the Ministry of Culture and Sports booth, and scheduled musical performances.

Aside from FREE entrance, visitors can also score free goodies at the book fair!

Have your name written in Japanese calligraphy, get a free book after you take a U.S. History quiz, and register for your Qatar National Library membership!

After feeding the brain with all the information you can find in the book fair, one can feed the body through the varying food options that visitors can find throughout the exhibition halls.

From vending machines, cafes, and food stalls, there are enough dining options in and out of the book fair. You'll find them in Hall 5, on the sides of DECC, outside the halls, in between pavilions, and there's also an ongoing Metro Street Food just outside DECC!

Aside from the ones mentioned above, there are other activities scheduled that you can check out!

For the detailed schedule on these activities, check out the official website: 30.dohabookfair.qa or follow the following social media channels.

Ministry of Culture and Sports:

The Doha International Book Fair is one of the oldest and largest international book fairs in the region and enjoys a good reputation due to the high demand from Arab, Gulf, and foreign countries participating in it.

The first launch of the exhibition was held in 1972 under the supervision of the Dar Al Kutub Al Qatariya. It would be held every two years but since 2002 it became an annual activity.

The Fair has gained international acclaim after it succeeded in attracting the largest and most important publishing houses of the world. More than 20 publishing houses participated in the first exhibition and reached currently to 335 publishing houses representing 31 countries on an area of 29,000 square meters.

Since 2010, Doha International Book Fair is selecting one of the countries as ‘Guest of Honour’ of the exhibition and so far the United States, Russia, Turkey, Iran, Japan, Brazil, and Germany have had the honour of becoming the guest of honour in the Fair. France will be the Guest of Honour of the 30th edition of the Doha International Book Fair this year.

Have you been to the Doha International Book Fair? How was your visit? Let us know in the comments!

Want to send a tip? Drop us an e-mail at c[email protected], anonymity is guaranteed!