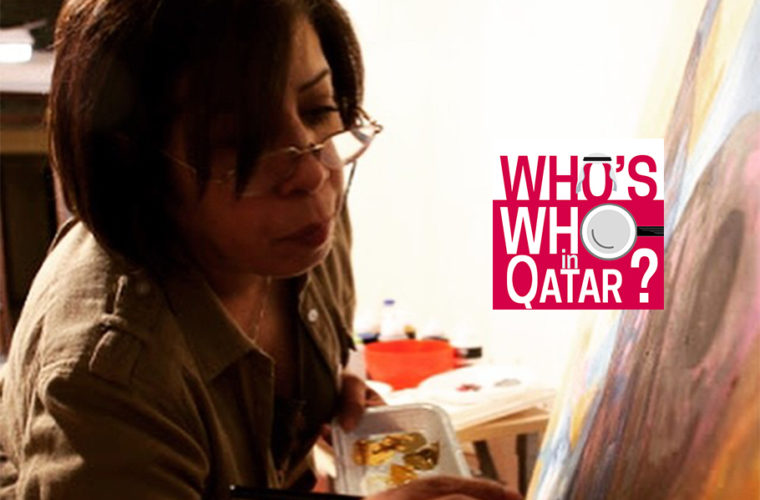 Wafika Sultan Saif Al-Essa is well-known in Qatar’s art circle and beyond the borders since the 1970s. She has earned her place as the first professional Qatari visual artist. She specialises in painting and plastics, and it wouldn’t be wrong to say that she is the pioneer of modern art in Qatar.

Wafika Al-Essa was born in 1952 in Manama, Bahrain, and her interest in art earned her a scholarship from the Qatari government at a time when art was not usually linked with women in the region. Armed with her scholarship, she set off for Cairo, Egypt, where she studied at the Helwan University’s (it was known as the Cairo University at that time) Faculty of Fine Arts in the bustling city’s Zamalek district where she chose Interior Design as her major. She graduated with a Bachelor of Arts in Applied Art in 1975.

She became part of a group of artists who incorporated painting in Qatari society and built relationships between artists, intellectuals and other social groups.

When she paired together her practice as a visual artist with her major, degree and experience in interior designing, she discovered that she could innovate and experiment through the two mediums.

Wafika Al-Essa pays special attention to detail, and has the unique ability of weaving beautiful stories through her art. Her art depicts Qatari folklore, natural history, proverbs and songs, and she often titles her art after them. She uses her art to investigate the relationships between women and men, and questions on genre. Her paintings often show women in groups and everyday life with a progressive perspective. When you see her calligraphy, you can also see that her style is influenced by Islam. When she started plastic arts, the Qatari society had conservative views when it came to this type of art, but with time, it became more accepted.

For Wafika Al-Essa, art is a passion and since 1972, she has regularly participated in different art exhibitions in Qatar and around the globe. She had her first exhibition in Doha in 1974. In 1976, she was part of the second Arab Artists Federation exhibition in Morocco. She was also in Kuwait as part of the fifth and sixth exhibitions of Arab Artists. In 1978, she attended the Qatari Art Exhibition in Paris-London and then again, in 1979, but this time in Tunis. When the Qatari Fine Arts Society was established in 1980, she became part of it and also attended its exhibitions in 1981 and 1982.

In the year of 2014, Wafika Al-Essa was given the Arab's Woman Award for the best Qatari artist.

Wafika Al-Essa has also worked as a production designer for Qatar TV - where she designed and executed backdrops for local programmes giving them a Qatari character - and also for the Qatari embassy in Cairo.

Although art remains her number one passion and she continues to paint, she is also the owner of a private consultancy business for architecture and design, and continues to be an inspiration for emerging artists, especially female ones, who are looking to pursue their passion in art and carve a niche for themselves in the world of art.

See more of her work on @wafika_s.