Top five natural wonders of Qatar that you need to see 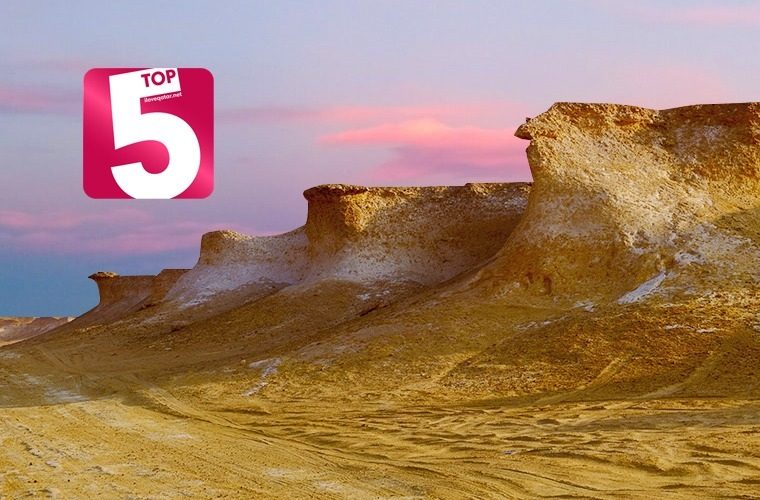 Qatar may be a small country but it also has its fair share of natural wonders! And there's no better time to see them than in winter when the temperature is favorable for exploring the attractions that Mother Earth has provided Qatar. Whether you're living here or just visiting, these top 5 natural wonders are worth a break from the city and man-made attractions that Qatar has to offer. Plus, all of these do not need any entrance fee and are open 24/7! One caveat though is that there are no public facilities in these spots so better come prepared.

More popularly known as the 'Inland Sea', this large tidal embayment is recognized by UNESCO World Heritage and currently included in its tentative list. It is also one of the top destinations in the country, known for its tranquility and breathtaking scenery. From here, you can see the neighboring country, Saudi Arabia from just beyond the dunes.

It is a favorite of not just those who love dune bashing but also camping, fishing, and photography enthusiasts too.

How to get to the Inland Sea: If you're taking your own 4x4, go with a group as it is not advisable to drive there alone. Tires also have to be deflated before leaving Mesaieed. You can download Ooredoo's Inland Sea app for more tips. Click here for the Google Maps location.

Thanks to the forces of nature, the rock formation in the limestone pillars shaped by coastal winds and erosion.

How to get to Ras Abrouq rock formation: If you're not going with a tour group and taking your own 4x4, from Doha take the Dukhan Highway then turn right before Cuban Hospital. Drive straight then turn right offroad. Click here for Google Maps location.

Among the natural wonders mentioned here, the 40-meter deep Dahl Al Misfir cave is little known to visitors. Believed to have been formed 325,000 to 500,000 years ago during the mid-Pleistocene Era, the sinkhole's opening is enclosed by a chain-link fence. Visitors enter through a small gate to descend to the bottom of the 'cave'.

According to Visit Qatar, the cave can give off a phosphorescent glow thanks to gypsum deposits found inside.

How to get to Dahl Al Misfir Cave: A 4x4 is recommended to get here as it involves offroad driving from Salwa Road and Rawdat Rashed Road. Click here for Google Maps location.

The serpentine estuaries of Al Thakira are best explored by kayaking through the dense canals while listening to the tour guide explain how this area was formed and how important it is in the ecosystem. This Mangrove forest is one of the oldest and largest in Qatar and is also a popular fishing and birdwatching spot.

How to get to Al Thakira Mangroves: Although possible to reach with a sedan, it is safer to take a 4x4 if you're not signed up for a kayak tour as it requires offroad driving to get to the coast where the Mangrove is. Click here for Google Maps location.

Another place known for its mangrove forest is an island in Al Khor known as Purple Island. It is also popular for its sunrise and sunset views. Visitors loved the new wooden bridge which makes the place convenient for families. Kids will have a fun time spotting birds, fishes, and crabs in the area.

Like Al Thakira, boating and fishing are also popular here. There is also a nearby beach for those who want to swim.

Purple Island is also known as Jazirat bin Ghannam and Al Khor Island. The name "Purple Island" originated from the sea snails that produce a dark red dye, whose remains are found on the island.

According to Qatar Museums, "the island was probably never permanently inhabited but visited for specific reasons at different periods. It was a place of transit, a temporary campsite for trade with Bahrain and was used by fishermen or pearl divers as early as the beginning of the 2nd millennium BCE. Later though, the island was a production site for red-purple dye from shellfish during the Kassite Period. It was a camp for pearling expeditions during the Sassanian Period and a fishing outpost in the Late Islamic Period."

How to get to Purple Island: Drive north to Al Khor via Shamal Highway and turn right before Al Meera Dhakira. Drive straight then turn right in the unpaved road to reach the Purple Island parking area. Click here for Google Maps location.

As always, please practice LEAVE NO TRACE principles when traveling in Qatar. This includes disposing of your waste properly, respect wildlife, leave what you find, and minimize campfire impacts.

Have you visited all of these natural wonders of Qatar?