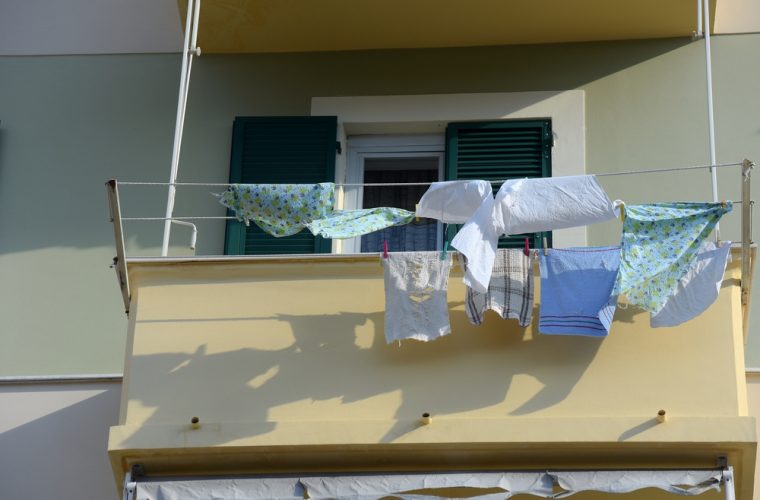 (Clothes hung on the balcony of an apartment. Image for illustrative purpose only, credit: Shutterstock)

Qatar as a nation has become absolutely dedicated to providing the greatest possible standards of hygiene in the public sphere. In order to achieve this, the relevant Qatari authorities have a Public Hygiene Law to try and prevent the most flagrant violations of public health and hygiene legislation. As a consequence, the Public Hygiene Law No. 18, first introduced in 2017 has come into full effect from February 2018.

The law ensures harsh punishments for breaking the rules, including huge fines of up to QR 25000. The law also recommends prison sentences of up to one year if serious transgressions of the law are proven.

Littering with drinks cans or cigarette butts, discarding newspapers or food packaging in public places, throwing items from moving vehicles on the highway, and polluting beaches with any items of junk – are some eExamples of minor violations which will incur a QR 500 fine.

The law also stipulates a fine of QR 300 on householders or tenants who leave refuse sacks or other forms of waste in front of their domiciles, on the roads or in public parks or on public land. The washing or cleaning of vehicles in undesignated spaces also constitutes as an offence under the new law and subject to a QR 300 fine. Extremely harsh penalties are applicable on companies who dump construction or sewage waste in undesignated areas. For these offences, the law imposes a fine of between QR 5000 - QR 6000.

The Ministry of Municipality and Environment represented by the General Cleanliness Department has revealed a new plan on February 19, 2019 to catch violations of public hygiene law by using surveillance cameras of National Command Center (NCC) of the Ministry of Interior, reported The Peninsula Qatar.

“First time during the coming period, in coordination and cooperation with authorities concerned at the Ministry of Interior, the violations of public hygiene law will be monitored by surveillance cameras of National Command Center (NCC) of the Ministry of Interior,” quoted by Director of General Cleanliness Department Safar Mubarak Al Shafi as saying the Peninsula Qatar.

The General Directorate of Traffic Patrols will also participate in monitoring violations The campaign will coordinate with concerned authorities in the Ministry of Interior to report violations through Metrash.

A number of Ministry employees will be available at the control rooms of NCC to monitor and catch the violations in coordination with the Traffic Department.

Measures to aware public about the law

The Ministry has undertaken many other ways and means to make the general pubic more aware of the offences and penalties. This includes the strategic location of billboard and poster advertising throughout the Qatar transport network, newspaper advertisements locally and nationally in Arabic, English and other languages used by Qatar’s expanding expatriate workers, residents and visitors, local and national radio broadcasts, and a video campaign highlighting the changes, which can be shown to educate those working in many labour camps. The ministry of Municipality and Environment (MME) has also recommended general public to become more involved in raising increased awareness of the Public Hygiene Law.

Did this article help you to learn more about the new Public Hygiene Law in Qatar? Have you ever faced penalties for violating the rules? Let us know in the comments section below. And don't forget to like and share this article!