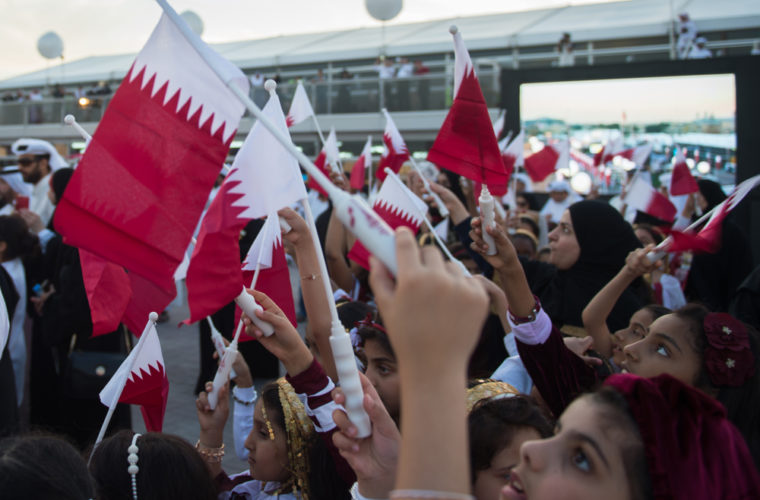 A flag has an important place in the lives of people from that country. It is part of their identity and signifies where they come from. It symbolises national loyalty and must be respected at all times. The Qatari flag is part of the country's history and its heritage, and is a symbol of pride for the people of Qatar.

What do the colours in Qatar Flag represent?

The Qatari national flag is made up of two colours: maroon and white. Many believe the maroon colour signifies bloodshed and the white represents peace during wartime. However, that's not the case. In fact, for centuries, ancestors of today's Qataris dyed their flags a red colour that was found at the area that is known as Purple Island today. Exposure to the sun would fade the flag colour to a maroon or purplish-red colour.

In 1932, the British Navy urged Qatar to change the design of its flag. They proposed the colour red for the flag, but Qatar opted for maroon instead keeping in mind the colour of the flag when the country's ancestors were alive. They felt it was the best way to connect the culture and heritage of Qatar.

In 1960, H.H. Sheikh Ali bin Abdulla Al-Thani, the Amir of Qatar at the time, changed the flag's design to what it is today: maroon and white with nine serrated points that signify Qatar being the 9th member of the Trucial Coast Convention of 1916. (QNL)

In 1971, when Qatar joined the United Nations and the country's British Protection was abolished, the Qatari flag with its maroon (Pantone 1955 C) and white colours was raised, and this is how it stands even today. (Hukoomi)

Why is the Qatari flag called 'Al Adaam'?

The Qatari flag is known as ‘Al Adaam' in Arabic which, since ancient times has symbolised the maroon colour that is found on the Qatari flag. The linguistic origins of the word 'Adaam' are rooted in the verb ' to support' which, in this case means to support or prop something up, or the noun 'posts' which are used to prop up a house.

What is the size of the Qatari flag?

The Qatari flag is horizontally rectangular in shape and its width-to-length ratio is 11 to 28. (Britannica)

What is the Qatari flag made of?

The Qatari flag is made of Triknit Lux Polyester or Polyester Satin when used for government and official purposes. For the general public, any material can be used, but the colours must be the same. (AlMeezan)

How the general public can use the flag

You will often see vehicles, buildings with stickers of the Qatari flag on them, especially when it's Qatar National Day. Many people also have flags painted on their vehicles, on buildings and even on their faces. Then there are some who wear T-shirts or tops that adorn the Qatari flag. Many people will also have Qatari flags mounted on their cars and windows as a show of solidarity and respect for Qatar. You'll also see people with Qatari flag pins and other accessories attached to their clothes. All of this is perfectly legal as long as certain laws and protocols are observed.

Protocol for using the Qatari Flag

1. Respect for the flag

1) The Qatari flag should be treated with dignity and respect, and it should not be subjected to humiliation, or be raised in a position lower than any other flag or banner.

2) The flag must be manufactured in accordance with the requirements of the approved standard specifications.

3) It is prohibited to raise the flag if it is damaged, its colours are faded, worn out, dirty, or does not conform to the standards specified in the standard specifications, and the flag must always be clean and ironed.

4) It's not allowed to use the Qatari flag for a purpose that contradicts its original use or to add any phrases, pictures or designs to it.

5) The flag must be folded and tied in a way that does not make any of it dangle and touch the ground when transporting or carrying it.

6) It is not permissible to use the Qatari flag as a trademark or for advertising purposes.

2. Raising the flag on a flagpole

1) The Qatari flag must be placed at the highest point of the pole or flagpole, with the rope tightly pulled, unless it is scheduled to be lowered.

2) The flag pole must be raised so that it is facing the sky or tilted slightly forward and without barriers, provided that the pole is not lowered horizontally.

3) When the Qatari flag is hanging on the flagpole or in the middle of a street, it should be hanging vertically, with the white part up and the maroon part down, so that the spectator can always face the flag vertically.

4) When the mast has a girder end and a hook (a short pole attached to the mast at an angle), the hook is the first position, and the other positions follow the same pattern mentioned above.

3. Raising the flag in Qatar

1) When the Qatari flag is raised horizontally, the white part of the flag must be on the left side of the viewer facing the flag.

3) The Qatari flag may also be raised vertically, or at an angle to a pole from a balcony or window, at the height of the flag.

4) The Qatari flag should be in a visible place; the traditional place for this is the front of the main entrance to the building. The location of the Qatari flag depends on the formation of the flagpole, and the number of flags raised.

4. The flag at festive ceremonies

1) During the national anthem, everyone must stand facing the flag if they are at the ceremony.

2) The Qatari flag should be raised or lowered with reverence, and if it is raised in conjunction with another flag, it must be done in complete harmony, and if this is not possible, the Qatari flag must be raised first and lowered last.

3) The flag salute must be performed while raising and lowering the flag by the persons present at the venue where the flag is raised or lowered, and these persons, if they are from the military, must perform the military salute.

4) Everyone who passes by the venue where the flag is raised or lowered must stand in respect of it until the end of the ceremony.

5. The flag in a procession

2) If more than one flag is carried side by side, the Qatari flag shall be carried on the left side of the remaining flag bearers, which is the right-hand side of the spectators.

3) Another Qatari flag may be added on the opposite side. If other flags are carried next to each other, and their sum is an odd number, the Qatari flag must be carried in the middle.

Proper care of the Qatari flag

The specific instructions for cleaning the Qatari flag should be followed, according to the type of fabric used in making it. It should always be washed separately from other types of fabrics, and it should not be dried outside with other washed fabrics.

What to do with a damaged, torn or faded Qatari flag

1) If, for some reason, the Qatari flag gets torn, regardless of the extent of the damage, it must be replaced. It must never be repaired.

2) If the Qatari flag becomes unusable because it has become faded, damaged or torn, it must be collected and destroyed, or burned in an appropriate manner, so that its shape changes and becomes completely different, and does not indicate that it was a state flag in the past.

To read the laws related to the Qatari flag in more depth, click the links below: